Amsterdam’s rather large gay scene has several quality bars and clubs on offer. See our going out guide for details.

Often referred to as the “gayway” to Europe, Amsterdam’s scene can be both exciting and impersonal. The male scene, with pretty queens in Reguliersdwarsstraat and leather boys in Warmoesstraat, is often referred to as a meat market.

Despite Amsterdam’s small size, its gay scene is quite large. Many foreigners find themselves attracted to the city, and you can spot celebrities, such as George Michael, flying in for the weekend.

Many bars are filled with more foreigners than locals during the summer months. Ordering drinks in your native tongue is no problem, but don’t be surprised to be treated as a tourist rather than a Dutchman (or woman).

Amsterdam’s lesbian scene is, as in most other cities, more hidden. To be at the right place on the right date you almost need a maths degree: one club might host a lesbian night every third Sunday of the month and another bar will be female only on every second Tuesday evening. Nevertheless, some good lesbian places can be found.

Since the Netherlands is fairly accepting of gay culture, and many Dutch entrepreneurs are keen on the pink euro, bars and clubs are often well designed with open windows to attract a large crowd. Gay bars have gone through repression and acceptance, but are now considered an important part of Amsterdam city life.

The newest lesbian bar in town where you will find all types and ages of women. Bar Buka is located in the Pijp area of Amsterdam and you can expect a relaxed and welcoming vibe. Sip your favorite drink at a table or ask the bartenders to make their signature cocktail. The bar is open from Wednesday to Sunday starting from 5pm and during the weekends they stay open until 3am.

This funky, colourful bar/restaurant with a comfortable, cosy lounge corner is open to both lesbians and gays. Its enthusiastic staff organise special evenings, including bingo and tarot card reading. Tuesday night is reserved for lesbians. The restaurant serves up international cuisine – anything from burgers to full dinners. Anyone will feel comfortable popping in for a drink and soaking up the DJ-spun funky music.

One of the few long-established lesbian bars (since 1978) in Amsterdam recently changed its interior and door policy. Men are also allowed in, whether accompanied by a woman or not. As their website quotes, ‘Saarein is now open for all queer-minded people’. This small, cosy bar is split into three levels, including a bar, pool table and reading section. Saarein has a loyal following of feminists.

This small neighbourhood cafe does not specifically cater to lesbians, but is often visited by female couples in their 30s and 40s. Relaxed atmosphere, and not really a cruisy place.

Opened in 2003, You II is home to a similar crowd as the Vivelavie. Open for late-night drinks only, You II is more a club than a bar. Music is usually Top 40. Its standing toilet for women is worth an excursion.

Ever been to the sea, Billy? This friendly place is frequented by flannel types who’d rather be sailing. Very Dutch and mostly over 30. Or 40. Sunday night is a good crowd, but it’s always busy.

The only rotating gay bar we’ve ever seen sits in the back of this used-to-be-hip place. It’s been bested by Soho, and now only gets busy on Saturdays and Sundays. Sunday 6-8pm is 2-for-1 happy hour, and it gets absolutely packed. More and more women are making an appearance here.

A breath of fresh air on what had become a street of self-satisfied bars, this establishment has quickly become de rigueur. Not quite gay, not quite straight – there are no rainbow flags here – so it attracts a diverse crowd of women and men (although guys are in the majority). The design is trendy. And the people are trendy too. The bar (which also doubles as a restaurant most of the day and early evening) suffers from being split almost into two parts, but it makes up for it with a courtyard garden and plenty of seating. In most other cities this bar would be very average. On this street and in this city it’s a cut above.

One of the most renowned clubs/bars in the leather lovers’ heaven Warmoesstraat. Slightly less strict dress code than neighbouring Argos, Cockring is home to a wider range of leather-, jeans- and latex- loving men. You can have a beer here, but beware: Cockring’s clientele is very interested in getting together.

When it’s busy, Montmartre is gezelligheid personified – small, cosy, crowded and roaring with campy music sing-alongs. Best times are Sunday after 8pm and Friday nights. Seems to attract a lot of Hema fashion victims and guys from Dordrecht, but they’re easy.

This small, rather closed-off looking bar caters to a slightly older male crowd from former Dutch colonies such as Surinam, the Netherlands Antilles and Indonesia.

This gorgeous English-style pub is always busy with pretty (and they know it) men who are much too important to waste their time on you. Underneath the surface is a happening rent-boy scene, so beware of advances by too pretty and willing 19-year-olds.

Tons of Ken dolls in the shop front clearly show Queen’s Head’s camp and kitsch nature. Frequented by older, sturdy men, including many Brits, this bar hosts theme nights, from “how to design a website” to “worst Zeedijk drag queen competition”. Great laugh, if it’s your thing.

Recently opened Club More hopes to resuscitate Amsterdam’s near-dead nightlife. Every Wednesday night is gay night, and just like at the old Roxy it has a 1:100 female-to-male ratio. Acts and house DJs entertain club-goers with weekly themes (Creation, Paradise, Sin and Hell). And every last Sunday of the month, Club More turns female only with Habibah.

The gay community centre hosts a dance every Friday (for men) and Saturday (for women). Once a month there’s a retro night, and several other minority groups have their own “evening”. Often too smoky and full of cliques, it can be a difficult place to make friends. The lesbian night ranges from decent to dull; beware when the 18-year-old baby dykes conquer the dance floor and DJ set.

A staple of the Amsterdam scene, Exit used to have something for everyone.  Now the gezellig brown bar has been replaced with better coat check facilities for the club puppies and lurkers headed to the noisy darkness upstairs.  Too much smoke and thumping music for anyone over 25.  Best Fridays and Saturdays after 1am.

World-famous disco worth at least one visit to see the drugged-out teenyboppers and muscled-up gym monkeys. You’ll be convinced everyone’s on ecstasy, and you’d have to be to enjoy the horrid techno music. Since owner Manfred Langer died, iT is not really it anymore.

A Sunday evening only and very popular among locals, volunteer-run De Trut is one of the few place where gays and lesbians mix happily. Friendly and open atmosphere, cheap drinks and usually nice dance and disco tunes. Doors open at 10pm, and queueing starts by 9.15–9.30pm; door staff send people away if not gay- or lesbian-looking. 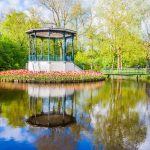