You don’t need to meticulously study the dreaded subjuntivo to get a dose of Spanish: Spanish movies are a much more entertaining window into the culture of Spain.

There are several different ways to practise Spanish: talking to native speakers, reading news in Spanish, changing your language preference on your social media accounts, signing up for classes, or just plain old immersion. If a trip to Spain or Latin America is not in your foreseeable future, don’t fret. There are ways that you can practise Spanish without even having to put on pants. Get those minds out of the gutter, friends, we’re talking about Spanish films.

Below, I’ve listed 10 Spanish films to help you learn a second (or third) language. I chose them because they’re genuinely good films, but also because their plots vary in terms of difficulty level and for the variety of accents. It’s important to train your ears to recognise the nuances in the Spanish language. Just as Americans can tell a Texas accent from a New York one, there’s a huge difference between Colombian (from Bogotá) and Cuban accents, or between Spanish spoken in Andalucia, Barcelona and Madrid. 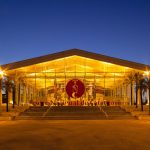 A guide to contemporary and traditional Spanish music