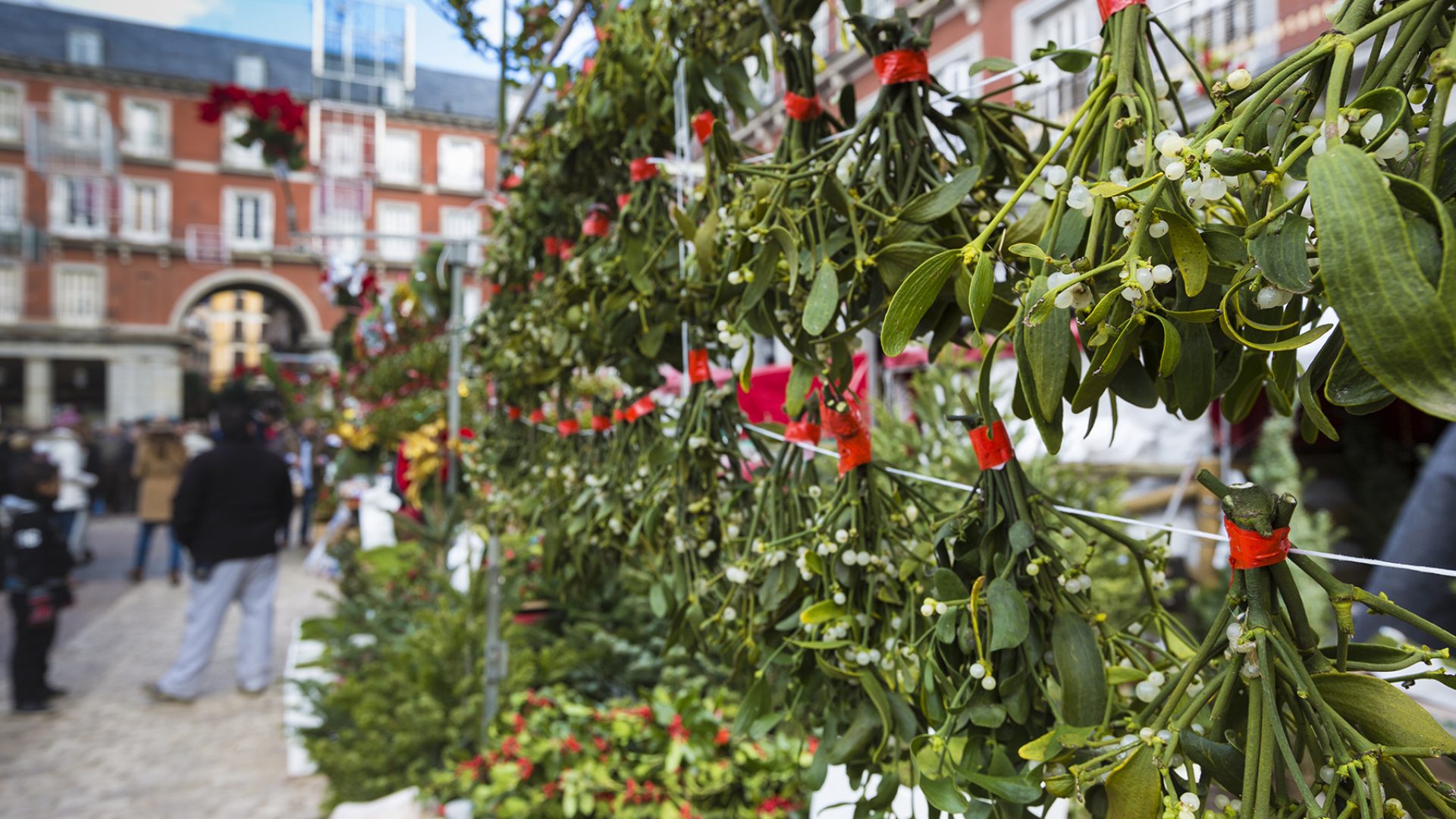 Turrón, lotería, uvas? What do these have in common with Christmas? Learn the most important holiday traditions when celebrating Christmas in Spain beyond wishing the locals a Feliz Navidad!

What’s a fir tree got to do with a traditional Spanish Christmas? Like reindeer and sleigh bells and Papa Noel himself, not a lot. But as Spain spends its way into the Global Department Store Christmas, the árbol de navidad is growing in popularity – although it looks unlikely to usurp the belén (see B) as Christmas decoration número uno.

Christmas crib, or nativity scene. Belén actually means Bethlehem, and while some show just the manger scene, others form elaborate tableaux of the town and its environs. Many families have a ‘belén box’ that goes back decades, full of lovingly-collected half-broken figurines, lumps of papier-mâché, bits of twig and silver paper, mirrors, corks, seeds and dried grasses; all ingeniously employed to recreate streams and bridges, paths and hills, carpenters’ workshops, fields of wheat and so on. Ironically, this most traditional of Spanish Christmas customs only goes back to the 18th century and was imported from Naples by the first wife of Carlos III.

Sweet things. The Spanish do savory brilliantly: hams, cheeses, olives and all the other salt of the earth stuff. But you’ll also need to find excitement for mantecados and polverones: lardy cakey, biscuity things that glue your mouth together and come in terrifyingly large boxes.

Steven, as in Saint Steven’s Day. The 26 December is a bit of a damp squid in most of Spain; there are newspapers, the banks are open, and some unfortunate souls even return to work. In Catalunya and Baleares, though, it is a public holiday and as important as England’s Boxing Day.

Figurines for the nativity scene

These were originally made of porcelain, and later baked clay and plaster. It took the wonders of the hundred-peseta shop to turn an artisan art form into mass-produced tack. Apart from the main players, you can buy a whole range of village extras, including the kids’ favorite, el cagón or, in Catalan and Valenciano, el caganer (the crapper). What a country lad with his trousers round his ankles has to do with the holy scene is anybody’s guess.

Prawns. Ever since his first Christmas dinner in the UK (miniscule prawn-cocktail starter on a bed of limp lettuce), my Spanish husband insists on smuggling boxes of frozen shellfish in with the thermal underwear. Gambas at Christmas means dinner plates piled high with the biggest of prawns, langoustines, scampi, crayfish and other well-endowed relations. And that’s just the pre-starter!

Figs. After the shellfish comes a soup of some kind, then for the main course there’s turkey, fish, goat or lamb; then perhaps a light dessert; and finally – to aid digestion – out comes the Muscatel and the frutos secos: almonds, hazelnuts, dates, apricots, and figs. If you’re a fig fan, don’t miss pan de higos – a thick nutty ‘cake’ packed solid with the contents of several fig trees.

Christmas is a grim a time for pigs, especially the patiently-fattened, acorn-eating variety. One false turn in Carrefour and you’ll find yourself suddenly hemmed in by ceilings of swinging forelegs and hind legs, interspersed with extra-large, extra-phallic chorizos (sausages). Of all the festive foodstuffs it is the jamón, lovingly mounted on its cutting stand and covered with a damp cloth, without which the Spanish Christmas hamper would never be complete.

A staggering 90 percent of the population take part in the world’s most famous and ‘fattest’ lottery, El Gordo. Hardly surprising with prize money totalling EUR 1.8 billion. On the morning of the draw (22 December), any local bar is the place to be, where everyone will be glued  to the TV screen, clutching their décimas and participaciones (more affordable fractions of full numbers) as the children of the San Ildefonso orphanage pull out and sing-song the winning numbers.

Rooster mass, as the Spanish call our equivalent of midnight mass.

Christmas Eve. Most Spaniards rate this as the most important of all the Christmas feast days. It’s the only time, other than summer siesta hours, when streets are deserted and bars and restaurants close. But don’t be fooled, the action simply moves indoors. On this ‘good night’ the latest-suppering country in the world goes for gold, with most Christmas dinners starting around 11pm or midnight.

Saucepans. Preferably large enough to bath a small child, considering that it’s quite normal for 20 or 30 family members to eat together over the Christmas period.

A recent addition to the Christmas decor. Striking though they are, with their deep-red star flowers and velvety green leaves, I’ve yet to buy one that lasted beyond Reyes (see R).

You can guarantee this epic will be on television, along with Qué bello es la Vida (It’s a Wonderful Life) and El Mago de Oz.

Kings’ Day. In Spain it is still the Three Kings – not Father Christmas – who bring the presents. On the eve of 6 January, every city, town and pueblo holds its cabalgata (cavalcade). Melchor, Balthasar, Gaspar dressed in all their exotic finery parade down the main drag on tractors, horses or camels, thrones in tow, throwing sweets and toys to the crowds of excited children. Later, they flit from balcony to balcony, dropping off presents and partaking of milk and biscuits (water for the camels).

The purists don’t like it, but Spain has little hope against the red and white tide. Only the department stores and the kids are happy, as parents end up buying two lots of presents now.

Put as delicately as I can manage, ‘making the log drop its load’. It’s a charming Christmas Eve custom in Catalunya that involves singing special songs and beating on a blanket-covered log (the family tió) until the presents pop out.

Grapes. We sing Auld Lang Syne and hold hands while the Spanish eat a dozen grapes. The tradition was started by the wine merchants of yesteryear, giving the locals plenty of time to develop a 12-lucky-grapes gene. Year after year as I choke on green pulp and pips, my Spanish friends down theirs effortlessly. In 1996, however, even the most adept swallowers came unstuck when the clock of the Puerta del Sol in Madrid, instead of striking at digestible three-second intervals, speeded up to one and half seconds, leaving half of Spain with its mouth full.

Carols. Forget solemn. Think hand-clapping, foot-stomping, pub-type sing-a-longs and you’ve captured the essence of Spanish carol singing. It traditionally takes place around the belén, with everyone banging on a medley of home-made instruments – anís bottle and spoon, mortar and pestle, paper comb, jars of lentils and a zambomba (see Z). Probably the catchiest of all villancicos is the ubiquitous ‘Mira cómo beben los peces en el río‘ (Look how the fishes are drinking in the river).

Blanca Navidad, covered by old crooner Rafael, is as much a part of the season here as in the UK – despite the fact that most Spaniards (in the South and on the islands, at any rate) have as much chance of seeing a white Christmas as Brits have a sunny one.

Cheating a bit here, the Castilian spelling is Jijona and it’s the name of a town near Alicante where most of the season’s turrón is made. Said to have been invented by the ancient Greeks, authentic turrón is a kind of nougat made with almonds, sugar, honey and egg white. It is sold in gold bullion-type slabs and comes in loads of different flavours these days. Along with the hams, it occupies more square metres of supermarket in December than any other product.

Egg yolks. We have Spain’s Moorish past to thank for the fact that many Christmas sweets are made principally from pure cholesterol. Well, something has to be done with all those leftover yolks from the turrón production.

Key instrument for villancico (see V) sessions. Basically an upturned bottomless flower-pot with a drum-skin stretched across one end and a hole in the middle through which a pole fits. To produce the instrument’s low zam-bom, zam-bom sound the player spits on his or her hand and moves it up and down the pole. That’s the theory, at any rate. My efforts suggest there might be a zambomba gene out there somewhere.