Living in Spain? Here’s a list of all of Spain’s public holidays you need to know in 2020, as well as other crucial dates to make a note of on your calendar.

Whether you’re living in Spain or just visiting, it’s important to note the dates of Spain’s public holidays and key dates. This is because on some of these dates, businesses, and public offices will close or have reduced hours.

To ensure you don’t miss out on anything important, our guide puts together a list of Spain’s public holidays as well as important dates for your calendar.

An introduction to Spanish public holidays

Spanish national holidays are busy periods, particularly if a holiday falls on a Thursday or Tuesday and employees take a puente (bridge) holiday of four days (dias festivos or vacaciones – holiday in Spanish). The government’s proposal to move Spanish public holidays to Mondays and avoid this practice has yet to pass, however.

Bank holidays in Spain that fall on weekends are sometimes replaced with alternate days (usually on the following Monday) if the regional government so chooses. More recently, however, alternate days have not always been given.

In general, regional Spanish holidays coincide with large Spanish festivals and can be a spectacular time to visit a new city and try authentic Spanish food. However, many of Spain’s festivals are world famous meaning accommodation fills up quickly; as a result, it’s important to book early if your trip falls over a Spanish national holiday.

Many businesses also close during the national and regional holidays in Spain. Each year you can check the Spanish holidays list on the website of your local autonomous community, which generally puts out a list at the start of each year.

The best Christmas markets in Spain 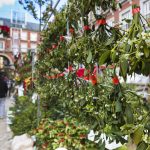