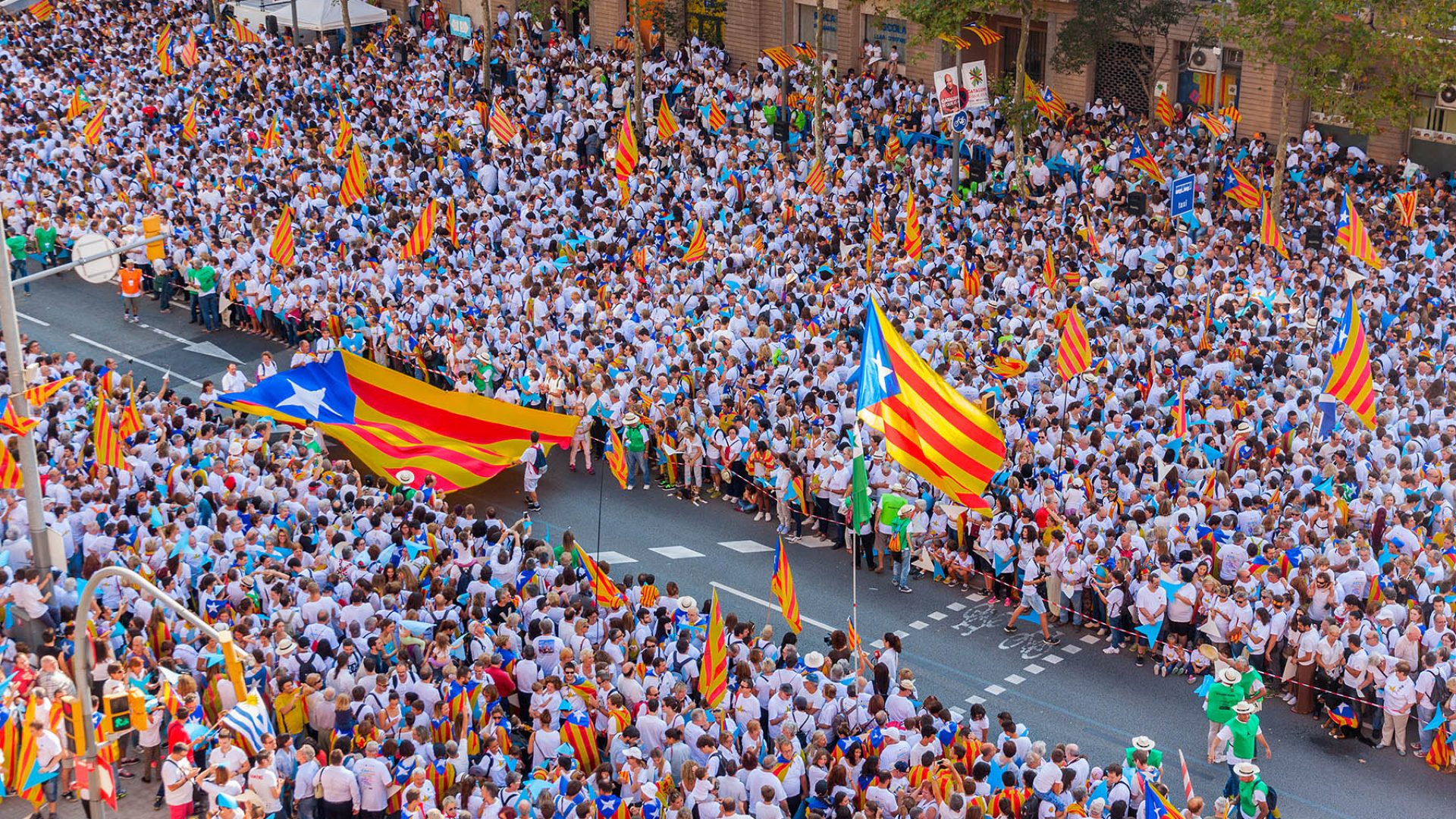 We provide an overview of Catalan culture, language, history, and politics as well as the basic geography of this unique and attractive region of Spain.

Situated in the northeastern corner of the Iberian Peninsula, the autonomous Spanish region of Catalonia is famed for its fiercely independent people, unique language, and creative culture. The region’s capital, Barcelona, is also known the world over as one of Europe’s most vibrant, dazzling cities. But what is it about Catalonia that makes it tick?

Whether you are moving to Catalonia, or simply passing through, this helpful guide provides an overview of the region. It covers the following:

Looking for a new home in Catalonia? Spotahome is an on-line property portal operating throughout Spain that takes the stress out of renting. With Spotahome's unique online platform, you can find, look around, and book your next rental property without leaving home. Make moving home easier with Spotahome.

The geography of Catalonia

Located in northeastern Spain, Catalonia (Cataluña in Spanish or Catalunya in Catalan) is an autonomous region that encompasses the provinces of Girona, Barcelona, Tarragona, and Lleida. The less populated northern area of Catalonia largely consists of towering Pyrenees mountains, which border France and Andorra.

This picturesque and varied landscape offers endless opportunities for hiking, skiing, climbing, and camping among the rocky, pine-scented slopes. Meanwhile, in the many charming old villages that dot the area, shepherds still raise sheep and cows. Here, they produce tasty, sharp cheeses and provide the area with quality beef.

Discover the top 10 things to do in Barcelona

By contrast, the region’s bustling capital city of Barcelona, and the entire coastal region, the Costa Brava, are lapped by the warm Mediterranean Sea and offer a coastal charm. These are abundant with cultural and culinary delights of their own, which naturally lean more towards the aquatic.

Although Barcelona sprawls from the sandy beaches up toward the hills where wild boar roam among the rosemary shrubs and eucalyptus forests, it’s easy to get around. The city boasts a well-run public transport system that makes getting around both easy and fairly fast. In less than an hour, for instance, you can find yourself sipping on a chilled vino or enjoying some tasty local pintxos in one of the countless surfside chiringuitos.

Thirsty? Grab a drink at one of these top bars in Barcelona

Popular beach bars line the sandy shores of nearby coastal towns such as Castelldefels, as well as the more crowded Sitges and Tarragona. The latter both lie further south and are abuzz with nightclubs, yachts, and larger herds of tourists and expats.

The local language of Catalonia is Catalan, which has Latin roots and sounds like a mixture of French and Castilian Spanish. Today, Catalan is the co-official language and is prevalent in schools, public addresses, and the media; although this was not always the case.

Read more about the different languages in Spain

Around nine million people speak Catalan; primarily in Catalonia, Valencia, the Balearic Isles, Andorra, and the town of Alghero in Sardinia. It is essentially the first basis of the Catalan identity. The other official language in Catalonia is Castilian Spanish which is prevalent throughout the region. However, most Catalans are bilingual. Therefore, expats moving to the region who only speak Castilian Spanish won’t face too much of a language barrier; despite what many may fear, or hear.

The region of Catalonia, and more specifically the port of Barcelona, prospered through trade and commerce during the 13th and 14th centuries. During this era, Catalan became one of the most widely spoken languages in the greater Mediterranean basin.

New and monumental gothic architecture also took root, including in the historic Barri Gòtic (Gothic Quarter) in the center of Barcelona. Three of the most impressive buildings from this period are the great Gothic churches of Santa María del Mar, La Seu, and Santa María del Pi.

Catalonia has been an integral part of Spain since the 15th century. Catalan pride and identity gained steam over the 19th century, bringing in a fresh push for separation from the state. That was until the end of the Spanish Civil War in 1939 when Barcelona fell to General Francisco Franco‘s right-wing army. The oppressive ruler soon squashed all sense of local independence and even restricted the use of the Catalan language.

Following Franco’s death in 1975, Spain finally became a democracy. Since then, Catalonia, like Spain’s other regions, has largely been governed by its own parliament. Today, opposing pro-Madrid and pro-independence parties are both strong forces in Catalonia’s parliament.

A separatist movement once again took hold in 2010, with many Catalans concerned that their region was over-taxed. This called for complete autonomy and economic independence from crisis-stricken Spain.

Read more about the government and politics in Spain

Since then, three non-binding independence referendums have been held in Catalonia; in 2014, 2015, and 2017, respectively. These resulted in the vast majority voting for independence from the state, albeit on small voter turnouts. The Spanish government, however, deemed these votes illegal and insists that Catalonia has no constitutional right to become its own nation. As a result, tension continues to define the relationship between this corner of the peninsula and Madrid.

Aside from the unique Catalan language which is prevalent throughout Catalonia, the region’s strong sense of independence is also visually evident and palpable. Visitors and newcomers to the area will no doubt observe the countless Catalan flags hanging from terraces, doorways, and windows around towns and cities; most notably in Barcelona.

The Catalans are not only creative and fiercely independent, they are also an intellectually curious and hard-working group. Their bustling economy, resilience, and once wide-spread power across the Mediterranean still prevail today. Although most Catalans can also speak Castilian Spanish fluently, the unique Catalan language, literature, and lyrics are all central to their identity.

As a result, tourists who attempt to communicate in Castilian when ordering food or asking directions while visiting the region occasionally feel that they are purposely not being heard. Some Catalans even choose to reinforce their cultural identity by responding to such requests in English, or another shared language, rather than reverting to Castilian.

However, despite the seriousness of the age-old Catalan drive for autonomy and recognition as its own people; which dates back to the middle ages when the area was its own fiefdom, the Catalans are also notably warm and welcoming. This is evident in the tremendous popularity of the region among travelers, expats, and tourists from around the world.

As a region, Catalonia is synonymous with fantastical, colorful, and unique art and architecture, much of which is housed in and around Barcelona. What makes the city stand out is its rich art history and the enduring legacies of the native Catalonian masters who created it.

While most buildings in Barcelona look like they might be found anywhere across Spain, the city is peppered by the whimsy, color, and unique inventiveness of famed architect Antoni Gaudí. He was born in a small village in Catalonia in 1852.

The legendary architect is famous for his flamboyant, rule-bending designs, organically shaped structures, and distinctly free-form style. He constructed countless private homes and apartment buildings in and around Barcelona. These not only remain standing today but are the homes of locals. In fact, his first residence, Casa Vincens, will reportedly be made available as an Airbnb rental for one night only in Autumn, 2021.

Located in central Barcelona, Gaudí’s most ambitious work, the towering Sagrada Familia, or Church of the Holy Family, dominates the city skyline from afar. And although he was unable to complete his masterpiece before passing away in 1926, his vision and creative work continue. In fact, plans to finalize and fully open it to the public are, at last, imminent. And in 2010, Pope Benedict XVI consecrated the incomplete church as a basilica.

Catalonia is also the birthplace of the notable surrealist master Salvador Dalí, one of the most celebrated painters of the 20th century. While you will find his work hanging in the largest museums around the world, the best place to get a feel for it is by visiting his charming hometown of Figueres.

Located just thirty minutes from the French border, the northern Catalan town is where the remarkable artist was born, raised, and died. Figueres is home to the Teatre-Museu Dalí (in Catalan) a large theatre renovated by the master himself.

Find out where to take the kids in Barcelona

The impressive museum displays one of the most important collections of Dalí art. This includes paintings, drawings, sculptures, and impressive 3-D installations. Dalí’s body even lies in a crypt below the stage. Unsurprisingly, this is one of the most visited museums in Spain, receiving around 1.4 million guests each year. Nearby, the Dalí Jewels Collection showcases jewelry created by the artist as well as precious stones.

But no mention of Catalan art would be complete without spotlighting the impressive impact of another native artistic genius, Joan Miró. The contemporary abstract painter famously said, “All my work is conceived in Mont-roig”. He was referring to the large Catalonian town where he lived. Much of his work reflects the colors, landscape, structures, and wildlife of his hometown.