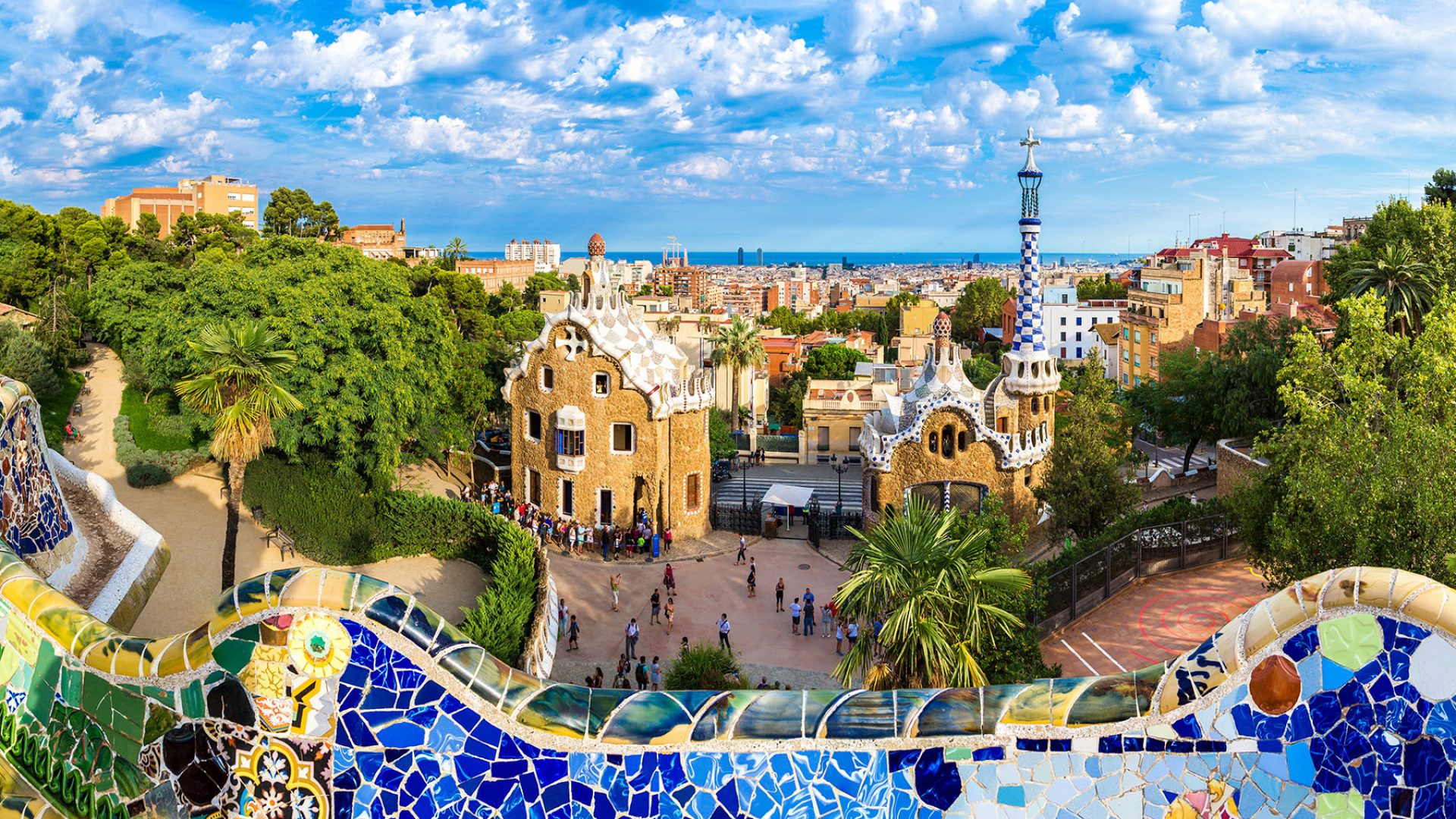 Home Lifestyle Things to Do Top 10 things to do in Barcelona
Last update on March 09, 2022
Share

Brilliant Barcelona has a long list of top places to see. Here’s a pick of the best attractions and things to do when you’re there.

Barcelona’s best tourist attractions are world-famous, including the wondrous works of Gaudi, the stretches of long sunny beaches, an edgy nightlife and bar culture, street performances, food markets, and much more. There are far too many things to see and do in Barcelona to fit into one single list. Nonetheless, here’s the best places to soak up the city’s edgy vibe.

You can see Antoni Gaudi’s modernista architecture all across Barcelona. Without a doubt, his most famous creation is the iconic La Sagrada Família church. Gaudi started work on the church in 1882 and it’s still not finished. The latest estimates are sometime between 2026 (the 100th anniversary of Gaudi’s death) and 2040. The Nativity façade, which looks like candlewax dripped over soaring Gothic spires, and the crypt, are the most beautiful parts.

Park Güell, a UNESCO World Heritage Site, is a fantastical place with bright mosaic columns, a dragon’s staircase, the pillared Hypostyle Hall, and the world’s longest park bench, which sits on a sunny terrace overlooking the park.

Casa Milà is known as La Pedrera (‘the stone quarry’). Its’ undulating grey stone façade looks more like a lava cave than an apartment block. Other Gaudi buildings around Barcelona include Palau Güell, Casa Batilló, Torre Bellesguard, Casa Vicens and the crypt of the Church of Colònia Güell in Santa Coloma de Cervello.

For detailed information on where to find buildings by Gaudi and other Modernista architects, see the Barcelona Modernisme Route website.

2. Climb or cable car it up Montjuïc

Take a walk up through the gardens on the hill of Montjuïc; there’s a castle on the top, spectacular views all around, and lots to see along the way. Montjuïc was the site of the 1929 International Exhibition; the original Pavelló Miles van der Rohe was built for it. The hill has been a cultural and leisure center for the city ever since. There are three major art galleries: the Museu Nacional d’Art de Catalunya (MNAC), with a collection covering 1,000 years of Catalan art; CaixaForum, showing international contemporary art in a former textile factory; and the Fundació Joan Miró with more than 220 paintings, 180 sculptures, and other pieces by surrealist artist Joan Miró and his contemporaries.

If art’s not your thing, check out the magnificent stadiums and buildings of the Olympic Ring; these were built for the 1992 Summer Olympics. There’s also the military fortress of Castell de Montjuïc, the Jardí Botànic (botanical garden), an outdoor swimming pool, and, every summer, Sala Montjuïc, which is an outdoor cinema festival.

If the walk up seems over-facing, you can take a cable car to the top of Montjuïc.

3. On the Picasso trail

Spanish artist Picasso spent his early years in Barcelona. His family house once stood at number 3, C/Mercè. He studied art at the La Llotja Art School where his father was a teacher. Picasso used to meet with other artists to eat, drink, and discuss art at Els Quarte Gats (‘the four cats’); it’s still in business today. The Museu Picasso with over 4,251 pieces on permanent display in five adjoining townhouses – is a record of Picasso’s early artistic life, from pre-adolescent portraits through his Blue Period and onto his Cubist paintings and beyond. Picasso’s friend and secretary Jaime Sabartés used his own collection of Picasso’s works to establish the museum. Highlights include the 58 canvases of Velázquez’s famous Las Meninas on display in the Great Hall.

4. Lose yourself in the Gothic quarter

Stroll around the cobblestone streets of the old Gothic quarter (Barri Gòtic) between La Rambla and the Via Laietana. This is the center of old Barcelona where there are remains of Barcelona’s Roman settlement and medieval buildings.

On Plaça del Rei is the Museu d’Història de Barcelona (Museum of the History of Barcelona, or MUHBA), where you can roam through the city’s old Roman streets. The church of Sant Felip Neri still bears scars from the bombing during the Spanish Civil War. In the heart of the Gothic quarter is the Catedral de Barcelona with its flying buttresses and soaring steeples. Take a peep inside to see its spectacular domed ceilings. The cathedral’s cloister is dedicated to St. Eulalia, the patron saint of Barcelona, where the resident white geese were originally kept to ward off intruders. While the area is historic, it’s also vibrant, full of bars and restaurants.

La Rambla is Barcelona’s most famous street, running from the Plaça de Catalunya to the Columbus Monument by the port. It lies between the Gothic quarter and el Raval. The pedestrian boulevard runs down the middle, sandwiched in between two narrow lanes of traffic and lined with trees. It’s full of cafés, bars, flower sellers, buskers, people selling souvenirs, living statues and pavement artists – and the occasional pickpocket too, so hold onto your belongings while you gawk at the lively scene. It still feels safe though as there are usually people milling around until the early hours of the morning.

Bustling La Boqueria, Barcelona and Europe’s biggest food market, is half way down La Rambla. There has been a market here since 1217 and it’s where the locals and many of Barcelona’s top restaurateurs buy their fresh produce, which says a lot about the level of quality. The stands are piled high with fruit, vegetables, sausages, cheeses, seafood, sweets, cakes, and bread. As well as a fascinating place to visit, it’s a great place to pick up snacks for a picnic. There are also tapas bars and pizza places all over if you want a meal on the go.

A little further away lies the Mercado de Santa Caterina, famed for its wavy mosaic roof designed by Enric Miralles and Benedetta Tagliabue. To see the rooftop artwork of some 325,000 tiles, get up high or search for it from Barcelona Cathedral. Refurbishment of this market, one of Barcelona’s first covered markets, was completed in 2005. Its’ gleaming interior houses market stalls, eateries, plus a couple of upmarket restaurants that serve the market’s fresh produce.

7. Flop on one of Barcelona’s beaches

Relax on the beach after a day of sightseeing! Barcelona has some wonderful golden beaches within easy reach of the city, all with the EU blue flag that denotes cleanliness, amenities, and safety.

Barceloneta is the closest and attracts the most crowds, with lots of chiringuitos (beach bars) to have a drink in, or something to eat. Take the metro to Barceloneta or walk – it’s only about 20 minutes from town. If you prefer something a little quieter, then head for Icària a little further along (Ciutadella-Vila Olimpica metro stop) – there are some very nice restaurants there, too. Maybe you want to strip off completely; then check out Mar Bella beach, which is a 20-minute walk from Poble Nou metro stop. If you drive, don’t leave any valuables in your car. Keep an eye on your belongings on the beach as well.

8. Chill out in Raval

Once a rough red-light district, El Raval west of La Rambla is now one of Barcelona’s coolest areas. It’s a vibrant, multicultural place with students, artists, and some of the city’s hippest bars and restaurants, designer and vintage shops, cutting-edge studios and galleries – and Barcelona’s more interesting nightlife.

Football fans won’t want to miss Camp Nou (‘new field’ in Catalan), home to Futbol Club Barcelona and one of the most visited attractions in Barcelona. There’s an interactive museum where you can find out about the club’s history. You can also go on a self-guided tour that takes you behind the scenes to the players’ changing rooms, out through the tunnel and onto the pitch, and to the presidential box.

You can get tickets for a game in the 100,000-seater stadium at the box office at Camp Nou, through FC Barcelona, or at tourist offices in the city.

10. Feast your eyes and ears at the Palau de la Música Catalana

Built between 1905 and 1908 by Luis Domènech i Montaner for the Orfeó Català choral society, the Modernista Palau de la Música Catalana is an ornate mash-up of brick, glazed tiles, stone sculptures, metalwork, and stained glass. Outside, there’s an allegorical mosaic of the Orfeó Català, flowery columns with busts of Beethoven, Bach, and Wagner.

You’ll need to go to a concert or take a guided tour to view the auditorium. The inverted stained-glass dome representing the sun bursts through the ‘sky’, muses seem to come out of the back of the stage, and Wagnerian Valkyries gallop over a bust of Beethoven.