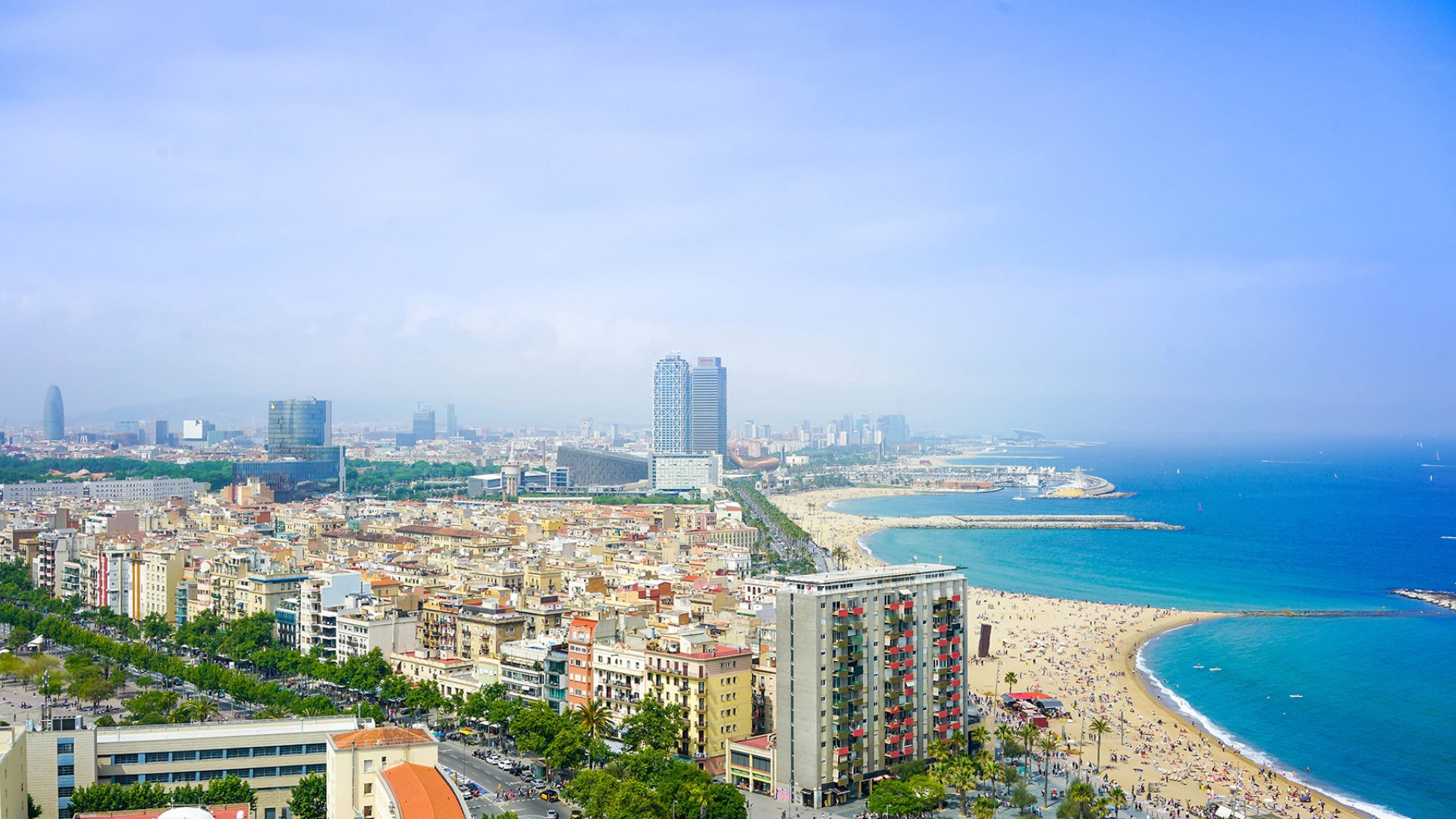 Home Lifestyle Things to Do The best places to visit in Spain
Last update on March 01, 2022
Share

Select from an eclectic plethora of historic Spanish cities, diverse landscapes, famous artworks, quirky festivals, and delicious food from all over Spain. Here are some of the best places to visit in Spain.

Wherever you plan to travel in Spain, you will find many great places to visit; even better, in each region, you’ll discover many Spanish foods to try. Spain is an addictive destination with its laid-back culture, wild Spanish festivals, diverse landscapes, and historical architecture everywhere you look. Scattered between distinct landscapes of beaches, plains, deserts, and mountains lie impressive Spanish cities, with well-preserved historical centres, cobbled streets, stone buildings, and imposing fortresses, castles, and city walls.

Some of Spain’s most popular tourist attractions have reached international fame. These range from Barcelona’s beach culture and Valencia’s Fallas effigy burning, to the infamous Running of the Bulls and tomato-throwing festival La Tomatina. But there are still plenty of great outdoors experiences in Spain, such as exploring the Costa Brava or hiking the Camino de Santiago. Whether you’re planning a beach holiday or a city break, there’s always a lot to see and do in Spain. To whet your appetite, here are a few of the best places to visit in Spain.

The stunning Costa Brava coastline stretches from Port Bou on the edge of the French Pyrenees down to Blanes, Girona. It’s been popular with holidaying Brits and other tourists for years. Thankfully, there are still wonderful places to discover away from the crowds along its 214 km.

You’ll find soaring cliffs, lush vegetation, sandy beaches, picturesque villages, and rocky coves and hidden bays only reached by boat. Some of the best places to visit in Spain are here, including Cadaques, quaint Begur and Port Lligat, where Salvador Dalí and his wife Gala lived and worked. Go inland to Figueres where Dalí was born. Visit the famous Dalí Theatre-Museum and Púbol where he bought a castle for Gala. If you’re interested in culture of a much earlier era, then visit Ampurias (or Empúries), a Greek archaeological site.

Frank Gehry’s spectacular Guggenheim Museum in Bilbao is one of the most important buildings of its time. Its soaring, titanium curves are mindblowing your mind; and that’s before you even step inside to view its collection of modern art. Bilbao, on the Bay of Biscay in the Basque country, is an architectural hotspot. The city boasts a metro designed by Norman Foster and an airport by Santiago Calatrava. Enjoy the local custom of chiqueteo – a plate of pintxos (appetizers) with a drink – in a café before a meal. And what should you eat? Cod, of course: Bilbao is the cod (bacalao) capital of Spain with hundreds of delicious recipes.

Film buffs won’t want to miss visiting this festival amid the arid deserts of Almería in southeast Spain. This is where some of the world’s best-loved films were made: Lawrence of Arabia, Cleopatra, Indiana Jones, and Clint Eastwood’s spaghetti westerns A Fistful of Dollars and The Good, The Bad, and the Ugly. Following a 66-kilometer route through the Tabernas Desert and Sierra Alhamilla Mountains, you can still see some of pop-up western towns built for filming. In fact, the area is now a type of theme park called Parque Oasys or aptly, Mini Hollywood.

Sevilla and its famous fairs

The capital of Andalusia is the fourth-largest city in Spain. Sevilla boasts three UNESCO World Heritage Sites: the Reales Alcázares Palace, the Santa Maria de la Sede Cathedral, and the General Archive of the Indies. Wander around narrow streets, breathe in orange blossoms, peer into tiny courtyards with tumbling bougainvillea and tinkling fountains, and you might just come across a lone flamenco guitarist. It’s a city that likes to eat and drink outdoors. Part of the city’s charm is its vibrant social life and buzz; enjoy a free tapa with the local beer, Cruzcampo.

One of the main events in Sevilla’s calendar is Holy Week, or Semana Santa. This is a week-long Easter festival of elaborate religious processions where statues are carried through Seville’s narrow streets as crowds of believers press to catch a glimpse of these magnificent religious artworks.

Visit in April and you’ll be treated to Sevilla’s other main spectacle, the Feria de Abril. This is a Spanish festival held for a week on the banks of the Guadalquivir river. Sevillanos of all ages, dressed in flamenco finery, stroll around or ride on horseback along streets of colorful marquees. The party continues all night long: dancing the Sevillanas, drinking jerez (sherry) and manzanilla (chamomile) wine and eating tapas. Best of all: you can join in.

For art and culture, nightlife and shopping, it’s got to be Barcelona. The capital of Catalonia (Catalunya) is a cosmopolitan city on the Mediterranean coast, with an ancient history: the Barrio Gótico (the Gothic quarter) is the site of the original Roman city. Don’t miss Antoni Gaudí’s fantastical (unfinished) La Sagrada Familia Cathedral and Parc Güell, the Picasso Museum (his early work) and the Joan Miró Foundation. There are great shops, great bars in Barcelona (and >tapas) and great clubs either side of Barcelona’s famous avenue called Las Ramblas. Read more about the best things to do in Barcelona.

Out of town, check out the gay-friendly seaside resort of Sitges. Take a cable car up to the National Park of Monserrat, a mountain with a stegosaurus-like profile, great hiking, a monastery, and panoramic views.

Since the ninth century, people have been making their way through northern Spain on the Camino de Santiago. This is the pilgrim’s route to Santiago de Compostela. Today, the 800km journey is popular with walkers and cyclists. Certain trails and accommodation can get busy during high season. This is typically during June to August; many pilgrims time their trip to arrive in Santiago de Compostela by St James Day on 25 July, one of the biggest Spanish festivals. Hiking in May, June, September, and October typically offers moderate temperatures and lower hiker volume.

There is a network of different routes. Perhaps the most spectacular runs between the northern Spanish coastline and the mountains. It was first used by pilgrims in the Middle Ages wanting to avoid Muslim territories. The network, passing through great historic cities and awe-inspiring landscapes, was given World Heritage status in 1993.

Running of the Bulls (San Fermin) in Pamplona

Pamplona, capital of the Navarre region, is full of history, with gothic, baroque, and neo-classical buildings in every direction. Visit the city during the week-long Fiesta de San Fermin to join its citizens in honoring their patron saint. Festivities include brass bands, alfresco dancing, fireworks, and the running of the bulls through the town’s cobbled streets. This is the tradition of running in front of a herd of stampeding bulls around the city’s narrow, cobbled streets. It really is as dangerous as it sounds. If it all proves too much, slip away and enjoy a classic meal of lamb with tomatoes and peppers, washed down with a Navarre wine.

The festival officially starts on 6 July at 12pm by firing the pyrotechnic chupinazo (or txupinazo in Basque), a rocket that shoots from the balcony of the town hall. Everybody throws wine and eggs at each other, staining the traditional white and red festival clothing. This is one of Spain’s best festivals, attracting hundreds of thousands of visitors each year, so booking early is essential.

Granada was the last place in Spain the Catholics reconquered after centuries of Moorish rule in 1492, making it a unique place to visit. Granada has impressive Moorish architecture; the undoubted jewel in the crown is the elegant palace and gardens of Alhambra, a World Heritage site. Moorish poets described it as ‘a pearl set in emeralds’, alluding to the colors of the buildings and surrounding woodland.

It was originally a fortress and later became a royal palace under Yusuf I, Sultan of Granada. Today, it’s a stunning complex of buildings decorated with Arabic inscriptions and geometric motifs, and peaceful gardens (called Generalife) with rectangular courtyards, fountains and tree-lined walkways. The winding streets of Albaicín (or Albayzín, also a UNESCO World Heritage Site) on a steep hillside facing the Alhambra lead to houses and old churches built on mosques, and magnificent views of the Alhambra and the Sierra Nevada mountains.

People have lived in the Madrid area for more than two million years – since the Stone Age. The city’s heyday came in the 16th and 17th centuries after King Philip II made it the capital. While many tourists brush over Madrid for Spain’s beaches or laid-back Barcelona, Spain’s capital is a top destination for offering it all. Some of the world’s top museums and artworks, gourmet restaurants, vibrant nightlife, a grand historic center, and large pedestrianized zones lined with shops, restaurants, café terraces, and bars, which usually offer a free tapa when you order una caña (small beer).

Visit the historic old town, Madrid de los Austrias, the city main square Plaza Mayor and the Royal Palace to see the remnants of Madrid’s heyday. Today, Madrid is famed for its art and culture; there are more than 70 museums including the Prado Museum, the Thyssen-Bornemisza Museum, and the Reina Sofia National Art Center. See the best things to do in Madrid or Madrid’s tourism site.

Down in the far south is the Sierra Nevada, a national park where you’ll find the highest peaks in the whole of the Iberian peninsula, and some of its most exceptional flora and fauna (including the Spanish ibex). It became a UNESCO Biosphere reserve in 1986. Facing the Mediterranean, at the foot of the Sierra Nevada lies Las Alpujurras, an area with thermal springs and spas. Tiny white cube houses cling to the hillsides, goats still scamper about wearing little bells, serrano hams cure, and almonds grow on trees.