The best things to do in Madrid

Home Lifestyle Things to Do The best things to do in Madrid
Last update on May 13, 2022
Share

It’s no secret that Madrid is one of the true gems of Europe. Here’s a guide to some of the best things to do while you’re in Madrid.

While Madrid competes for attention against Barcelona’s trendy lifestyle and Spain’s sunny southern beaches, it would be a shame to miss the Spanish capital’s diverse treasures. From 17th-century plazas and world-class art collections to flea markets and tapas festivals, there’s so much to explore in Spain’s capital. Whether you want to discover historic sites, gourmet restaurants, world-renown artworks, heart-pumping nightlife, or boutique shops, Madrid has it all. Read on to find the best places to visit and top things to do in Madrid.

The vast semi-circular Puerta del Sol is in the heart of Madrid, where Spain’s six national highways radiate out; in front of the grand Casa de Correos, which houses Madrid’s government, you find a plaque marking Spain’s Kilometre Zero. In the center of Puerta del Sol sits a statue of a bear and a tree, which is Madrid’s emblem.

Northwards you’ll find the Gran Vía, the most commercial avenue in the city with shops and bars. It’s lined with well-preserved Art Deco and Art Nouveau buildings and always thronged with people. Just behind it is Madrid’s famous gay neighborhood, Chueca, a lively place to shop, eat, and drink, especially in summer when it becomes the heart of Madrid’s huge Gay Pride fiesta.

Go west and enter through one of the arches into the colonnaded Plaza Mayor dating back to the 17th century. Enjoy a café con leche while you admire the statue of Felipe III astride his horse in the middle, or browse the city’s central tourist office, housed in one of the earliest buildings in the square.

2. The gate to the city: Puerta de Alcalá

This vast neo-classical gateway to the city stands in the middle of the Plaza de la Independencia, next to El Retiro park along the Calle de Alcalá. This must-see site was built for Charles III in the late 18th century. Go at dusk when it’s lit up for the full effect.

Further along the Calle de Alcalá is the Plaza de Cibeles, with its iconic fountain depicting the Greek goddess Cybele. This is where Real Madrid fans come to celebrate a big win. It’s also where you can view Madrid’s famous skyline from atop the Círculo de Bellas Artes. You can watch the sunset over the Cuatro Torres, the capital’s skyscrapers, whilst enjoying a drink on the rooftop bar.

The official residence of the Spanish royal family, the 18th-century Palacio Real or Royal Palace, is now only used for ceremonial purposes and the King lives elsewhere. This late-Baroque confection, built mainly from granite and white Colmenar stone, has 3,000 ornately decorated rooms, a collection of ceremonial armor, a Royal Pharmacy, and splendid gardens, where open-air concerts are held in the summer months. You have to follow a particular route around the palace, but you can go at your own pace.

Madrid’s Golden Art Triangle is marked by the big three art galleries: the Prado where you can feast your eyes on the works of old masters Goya, Velázquez, and other Spanish artists in the Royal collection; the Reina Sofia where you can see Picasso’s famous anti-war painting, Guernica; and the eclectic Thyssen-Bornemisza museum, where you’ll get a crash course in the history of Western art. Check their websites for opening times, details of permanent and temporary exhibitions, and tickets.

While you’re in the area, stop and admire the four-storey-high vertical garden at the entrance to the CaixaForum, a cultural centre built inside the shell of an old power station, which also hosts a range of free exhibitions.

Escape the bustle of the city streets in one of Madrid’s many parks. Close to the Prado, you’ll find the Parque Del Buen Retiro (also simply known as El Retiro). It has a central lake, where you can hire a boat, find street entertainers, fountains, fishponds, and statues including the famous Ángel Caído or the Fallen Angel. To the west of the city center is the larger Casa de Campo. This too also boasts a funfair, Madrid Zoo and Aquarium, and the Teleferico cable car, from which you can get an amazing birds-eye view of Madrid.

6. Eating and drinking in Madrid: Tapas and churros

Sample the typical Spanish breakfast of hot chocolate and churros – long, thin sugary doughnuts – at San Ginés in an alleyway between Puerta del Sol and Plaza de Ópera. They’ve been using the same recipe to make their hot chocolate since 1894.

For lively nightlife and a plethora of top restaurants, head down to one of the many bars of La Latina to find the very best tapas, small plates of snacks that accompany drinks – usually for free. Push the boat out with dinner at Restaurante Botín, the oldest restaurant in the world, according to the Guinness World Records.

If you’re in Madrid in spring, go to the Lavapiés neighborhood for Tapapiés, a 10-day tapas extravaganza: a tapas and bottle of beer for a couple of euros. This bohemian neighborhood is full of restaurants and bars, with many international options.

The Baroque Basílica de San Francisco El Grande is one of Madrid’s most impressive churches, with the world’s fourth-largest dome. Inside there are beautiful frescos; one in the Capilla de San Bernadino is by Goya, who included himself in the fresco. The ceilings of the small church, Ermita de San Antonio de la Florida, are covered with Goya’s frescos, hence its other name, the Panteón de Goya. Traditionally, Madrid’s seamstresses came here every 13 June to pray for a husband; and to this day, some young women still do.

If you’re in Madrid on a Sunday morning then follow the crowds down to Ribera de Curtidores in the Embajadores neighborhood. They’ll be looking for bargains at the city’s oldest and most famous flea market, El Rastro. Rastro means ‘stain’ and refers to its meat market days back in the 17th and 18th centuries, when bloody carcases left trails on the streets.

Today, you can search amongst the hundreds of stalls lining the street for both vintage and new clothes, jewellery, artworks, ornaments, LPs, household items, and much more. The market is open between 09:00 and 15:00.

Football fans should head north to the stadium of Real Madrid, named after the club’s famous president Santiago Bernabéu. You can buy tickets online for matches or for a tour of the stadium. There’s a panoramic view of the stadium, an exhibition about the club’s history, and cabinets full of trophies. You can also take a look behind the scenes at the players’ dressing rooms, go out through the players’ tunnel onto the pitch, and even pretend you’re the manager.

If you’re travelling to or from Madrid by train, you’ll spend some time at Estación de Atocha, Spain’s largest railway station. Come a little earlier than you need – the station is worth a visit because of its beautiful tropical garden in the main hall. There are around 7,000 plants from 260 different species; some of the palms are so tall that they almost reach the roof of the building. There are even ponds containing goldfish and turtles. Opposite the station, stop by El Brillante, as they serve up the best calamari bocadillos (rolls) in the city. 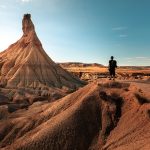