How well do you know Luxembourg? This mix of interesting and informative facts about Luxembourg will prepare you for living in the Grand Duchy. Test your knowledge!

1. Luxembourg is the second-richest country in the world.

Ranked by its GDP (gross domestic product) per capita of US$92,049 (2014). According to the International Monetary Fund projections, Luxembourg will overtake Qatar to become the richest nation in the world in 2015 with a GDP per capita of US$96,269. As a matter of fact, this makes doing business in Luxembourg a worthwhile investment.

2. Facts about Luxembourg: it has the highest minimum wage in the EU.

Paying workers a minimum of €1,923 per month. However, the cost of living in Luxembourg is one of the highest in the world.

3. Luxembourg is one of the safest countries in the world.

Crime rates in Luxembourg are impressively low. According to a UN survey, you have less chance of being shot in Luxembourg than in any other country in the world. Here’s one of the most telling facts about Luxembourg’s safety: there are around 1,300 police and just two jails in Luxembourg.

4. Nearly half of Luxembourg’s workforce commutes to work in Luxembourg from another country.

5. The restaurant with the world’s largest wine list is in Luxembourg.

Here’s one of the more thirst-quenching facts about Luxembourg. If you visit the Restaurant Chiggeri in the city of Luxembourg, you can take your pick from more than 2,200 different wines.

6. Facts about Luxembourg’s political system: it is the only Grand Duchy in the world.

After the defeat of Napoleon in 1815, the Congress of Vienna made Luxembourg into a Grand Duchy, a state or territory ruled by a grand duke or duchess. The country’s full name is, in fact, the Grand Duchy of Luxembourg. The present Grand Duke is Crown Prince Henri who assumed the throne in October 2000.

7. June 23 is the date of the Grand Duke’s official birthday but neither Henri – nor indeed any other Grand Duke – was born on that day.

The choice of date goes back to the early 20th century when the nation celebrated the actual birthday of Grand Duchess Charlotte (1919–1964) on 23 January. In 1962 it moved to 23 June to take advantage of better weather. June 23 is a public holiday in Luxembourg, in fact.

8. Luxembourg gets its name from a Saxon fortress.

Luxembourg was founded in 963AD as the County of Luxembourg by Sigefroid, Count of the Ardennes, who built a fort on the site; in fact, the ancient Saxon name Lucilinburhuc (‘little fortress’) symbolised its strategic position. Over the years, the little fort became a major fortress.

9. There are 17km of underground tunnels cut out of the solid rock beneath Luxembourg City.

The network of Bock and Pétrusse casemates were built as part of the city’s defenses. The earliest sections were built in 1644, enlarged 40 years later and then again in the 18th century – some parts are 40m deep. They were used as air-raid shelters during the two World Wars and could protect up to 35,000 people. Recognized as a UNESCO World Heritage Site, they are now open to the public.

10. Luxembourg’s motto is mir wëllebleiwewatmirsinn, which means ‘we want to remain what we are’.

This refers to Luxembourg’s history of ownership by foreign powers and the wish to remain independent now and in the future. One of the more interesting facts about Luxembourg is that it was passed back and forth between various European powers – the French, Spanish, Austrians, and back again to the French. Although it became an independent state in 1815, Vienna gave it to the King of the Netherlands as a personal possession. Luxembourg lost half its territory to Belgium in 1839 but had greater autonomy over the remaining lands, and, with the Treaty of London, became a fully independent, neutral state in 1867.

11. Luxembourg became one of the leading exponents of international co-operation after the World War II.

Despite being a neutral state, Luxembourg was occupied by German forces during both World Wars. It joined forces with Belgium and the Netherlands to form the Benelux Customs Union in 1944, was a founding member of the European Economic Community (EEC) in 1957 (which became the European Union (EU) in 1993), and also a founding NATO member in 1959. It has been a member of the Eurozone since January 1999.

12. Just under half of the permanent residents in Luxembourg are foreign

With around 170 different nationalities living in the country, immigrating to Luxembourg is a popular choice for many expats. Portuguese make up the biggest group at 16.4%. Additionally, just over 60% of the population of Luxembourg have an immigrant background according to the Duchy of Luxembourg’s Statistics Portal.

13. Euthanasia and assisted suicide is legal in Luxembourg

Although in 2008, the Grand Duke didn’t sign a bill approving euthanasia as it was against his personal beliefs; this led to constitutional reform. Laws no longer require the monarch’s approval; the role is now mainly ceremonial. Now, Luxembourg is a constitutional monarchy with a parliamentary democracy and the Grand Duke is the Head of State.

14. Luxembourg is one of the smallest countries in the world.

Here’s a fact about Luxembourg’s diminutive size. It has an area of around 2,586 square kilometres, about the same size as the county of Dorset in the UK and slightly smaller than Rhode Island in the US.

15. Luxembourg has the lowest population of all the EU countries.

16. The city of Luxembourg is a UNESCO World Heritage Site because of its historic fortifications and old quarters.

From the 16th century until 1867, Luxembourg was one of Europe’s greatest fortified sites, constantly reinforced as it passed through the hands of the Holy Roman Emperors, the House of Burgundy, the Hapsburgs, various French and Spanish kings and, eventually, the Prussians. Elements from all these eras are still in various gates, bastions, and forts and the old parts of the city have kept their original layout and public buildings.

17. The most powerful person in the EU is Luxembourgish.

As a matter of fact, Jean-Claude Junker holds the position of the President of the European Commission.

19. Luxembourg has the highest rate of car ownership in the world.

Each Whit Tuesday some 10,000 men, women, and children gather in the city of Echertnach in honor of seventh-century monk St Willibrord to take part in Europe’s largest traditional dancing procession, an event which has been awarded UNESCO World Heritage status. Watched by around 40,000 spectators, dancers wearing white shirts and dark trousers or skirts and holding handkerchiefs perform a synchronized hopping procession around the city, accompanied by a catchy polka marching band.

21. Luxembourg is one of the world’s major financial and business centers, and a tax haven.

It’s home to the European Investment Bank and more than 150 others. At the end of 2014, investigative journalists leaked some 28,000 tax agreements, tax returns and other documents – exposing how around 350 of the world’s largest companies, including Pepsi, IKEA, Procter & Gamble, JP Morgan, and FedEx, were able to save millions by using schemes made possible by Luxembourg’s favorable corporate tax laws. ‘LuxLeaks’ showed how companies set up complicated accounting and legal structures to legally move their profits from the high-tax countries where they have their HQs to low-tax Luxembourg – and in some cases, pay less than 1% in tax. Reforms are on their way.

22. Luxembourg’s Prime Minister Xavier Bettel was the first European Union leader to marry someone of the same sex.

When he married Gauthier Destenay in May 2015. The Luxembourg government approved same-sex marriage in June 2014 after a 2013 poll found that 83% of Luxembourgers supported it.

23. Luxembourg is a secular country but about 87% of the population are, in fact, Roman Catholic.

The remainder are Protestant (mainly Lutherans), Jews, and Muslims.

24. Luxembourgers have one of the highest turnouts to vote in Europe.

With 91% of the population turning out to vote in recent elections (the average for other OECD countries is just 68%).

26. The Mullerthal region of Luxembourg is Little Switzerland.

Arguably one of the most beautiful areas of Europe, Mullerthal has something for everybody. There are forest-covered hills, sandstone cliffs with impressive rock formations, the Schiessentümpel waterfall, tiny villages, and the ruined castles of Beaufort and Larochette.

27. Forests cover more than a third of the country.

And just over half of them have private owners.

28. The Schengen Agreements, which allow Europeans to travel freely across European borders, were signed in Luxembourg.

The two agreements were signed in 1985 and 1990 in the tiny village of Schengen in Luxembourg’s wine-growing Moselle region. The village, located where Luxembourg, France, and Germany meet, symbolizes free movement and the abolition of internal borders.

29. The highest court in the EU in matters of EU law is located in Luxembourg.

The Court of Justice of the European Union has 28 judges, one per EU member state.

30. Luxembourg City was the first to be listed twice as the European Capital of Culture.

In 1995 and again in 2007. It holds numerous UNESCO titles, and some leading artists born in Luxembourg include photographer Edward Steichen and painters Theo Kerg, Michel Majerus, and Joseph Kutter. At one point, the prominent French writer Victor Hugo resided in Vianden, Luxembourg (near the German border) and the house has been transformed into a museum. 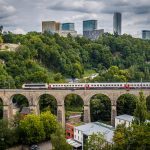