Traditional and popular festivals in Luxembourg

Here are some of the best festivals in Luxembourg that light up Luxembourg’s cultural and social life.

Christmas markets, Riesling wine tastings, and a festival about nuts? Luxembourg bank holidays and festival seasons have an amusing fusion of party traditions from Germany and France with an added local twist. Small, local, and mostly off the books and travel guides, finding festivals in interesting little Luxembourg often means vacation days arriving at the right time. Be greeted with a warm welcome with our listings of some of the best festivals and public holidays in Luxembourg that light up a joyful cultural and social life.

In the spring, most holidays and festivities in Luxembourg revolve around the Easter holiday weekend, from nationwide bonfire burning to pretzel Sundays. Take the day off work and immerse yourself in the Luxembourgish cultural scene.

Buergbrennen (the first Sunday after Lent) casts smoke clouds throughout Luxembourg as villagers burn wood in a pagan ritual to celebrate spring solstice. About 75% of the population celebrates by burning a large pile of wood with one or two leftover Christmas trees, usually shaped as a cross. It might be a startling sight at first, but rest assured the burning cross simply symbolizes the end of winter and the coming of spring. The holiday was losing its “flame” as a popular celebration around France and Germany, but Luxembourg led the way to revive it.

Even pretzels have a religious tie in Luxembourg. Pretzel Sunday is part of the Lent tradition of semi-fasting for 40 days and eating mostly fruit and fish. The pretzel was a bread often baked as a symbol of Lent – its shape representing arms crossed in prayer. Nowadays pretzels in Luxembourg are made with sweet icing dipped in almond flakes, glazed with a sticky sweetness, or covered in salt crystals. The Pretzel Sunday Procession in Luxembourg City is made up of pastry chefs and a Pretzel Queen walking about and handing out free pretzels.

The Thursday before Easter Sunday carries a silence as church bells throughout the day refrain from ringing. Stillness is eventually broken by groups of children making noises of clattering, or klibberen, with wooden instrument boxes that sound like wooden rattles. According to tradition, the church bells of Luxembourg have flown to Roman’s Saint Peter’s Square for confession and an Easter bell ringing performance. Children in Luxembourg towns walk around with their klibberen singing a call that roughly means “Let the bells ring once, let them ring twice, let them ring out at random”.

Easter is one of the most important holidays of the year for many Luxembourgers, and it is a multi-day celebration starting with Maundy Thursday and ending with Easter Monday. Children paint Easter eggs and the traditional food is rabbit, duck, or pork roasts with potatoes and hearty spring vegetables. On Holy Saturday and Easter Sunday (Ouschtersonndeg), children go house to house to collect their reward for klibberen bells back to town in time for Easter (see Maundy Thursday), and usually receive chocolates or small amounts of money. On Easter Sunday, parents usually play Easter Bunny and hide candies and colored eggs in little homemade nests for kids to hunt to find all the treats.

Easter Monday (the Monday after Easter Sunday) holds a folklore festival with traditional pottery markets selling ceramics in Luxembourg City and Nospelt. Whistles and flutes, called Péckvillercher, are hand-painted ceramics designed to look like adorable, colorful little birds. Traditional folk dancing happens throughout the day as stands sell ceramic birds of all kinds, sizes, characters, and types from chickens to penguins. As the only day to sell these Péckvillercher, there are thousands to peck at. Whistles are shaped like eggs, plump hens, meadowlarks hanging from ribbons and owls next to an endless rainbow of songbirds.

Octave is on the third Sunday after Easter, a religious holiday time that ends with a procession on the fifth Sunday after Easter. While the holiday time is to pay tribute to the Virgin Mary, religious traditions aside, people seem to enjoy most the Oktavsmäertchen, or Octave Market. Traditionally, the market was organized to ensure pilgrims had a place to eat and take refuge after church. Nowadays, the market offers a handful of restaurants a popular fish dish, burgers, drinks, souvenirs, and games for locals and visitors.

Ascension Day is a bank holiday in Luxembourg, and it is celebrated 40 days after Easter Sunday. Most shops and businesses are closed, including supermarkets; if shops are open, there might be early closing hours. While this Catholic holiday is observed across many European countries, there are few traditions that take place apart from possible processions and cooking meals with seasonal produce.

Whit Tuesday in mid-May carries a tradition that has been around since medieval times. Anyone living around the eastern Luxembourg town of Echternach will enjoy a traditional dancing procession held on Whit Tuesday. Groups of dancers and musicians gather together and move through the streets while playing traditional songs as they dance to the basilica.

On 23 June, the people of Luxembourg have a public holiday to celebrate the Grand Duke’s birthday called National Day. No duke or duchess has ever had a birthday on this day, but either way the holiday commemorates Grand Duchess Charlotte who ruled from 1919 to 1964. There are celebrations across the country, notably Luxembourg City. A torchlight procession is held the night before, and there are fireworks lit across the Petrusse Valley. Mass is held at the cathedral, and a party follows in the city with dozens of food stands, music, drinks, and dancing. There are official ceremonies, military parades, and, to top it off, a 101-cannon salute to honor National Day.

Wine festivals are village events usually held in spring through late summer, arranged at local wineries or outdoors. Wine festivals are complemented with live music and traditional food, along with local wine and beer. On a Proufdag (tasting day) in May and June, each winery opens its cellars and organizes tastings of its latest seasonal wines. Villages along the Moselle river are the usual locations, and to celebrate a harvest sometimes the town’s fountains flow with wine. Grevenmacher and the Riesling Open in September are most popular.

Each year, on Saint Barthélemy’s Eve (23 August), a great fair is set up at Limpertsberg in Luxembourg City. The Schueberfouer is the annual Luxembourg city funfair held for eight days on the Glacis square with food stands, rides, and rollercoasters galore. It has been going strong for over 600 years, with the first fair held in 1340. Game booths for children, epic rollercoaster rides, and live entertainment are all in the mix, alongside food stands and candy shops staying open until one and two in the morning.

The month of July hosts Festival de Wiltz, an open-air music and performing arts event with live concerts and theatre nightly amongst a backdrop of the Wiltz castle. Thousands of spectators come to enjoy the classical themes on summer nights, from operas such as Phantom of the Opera to jazz icons such as Miles Davis, world music, classical soloists, and more.

The Echternach Music Festival has been held in May and June since 1975 at Echternach in the east of Luxembourg. The festival is a nightly mix of classical music performed in the 18th-century basilica of Saint Willibrord and the Saint Peter and Paul church. Their jazz festival follows and is held in September and October. World music, modern jazz, and solo composers such as Yo-Yo Ma have played here alongside young talent from Luxembourg and abroad.

This medieval festival, situated around the old stone Vianden castle, takes place around the first week of August and is the largest in Luxembourg. The medieval theme from this bygone era is alive throughout the day and knight with a diverse program, from campfires and combat shows to juggling, calligraphy shows, and more. There is a medieval crafts market, concerts of traditional medieval music, and an array of hearty tavern foods from centuries before. Live entertainment such as belly dancers and snake charmers dance to drum beats as guests enjoy grilled meats and jovial cheer. The 2019 Vianden Medieval Festival takes place from 27 July to 4 August.

A nut market festival might sound amateur, but Luxembourgers go wild with walnut harvesting in fall at the Veiner Nëssmoort nut market. The celebration is usually held around the second Sunday of October in the northern town of Vianden on their main street, which is filled with stands selling traditional nuts and nut products, nut breads, and nut schnapps along with the usual beer and sausages. Music and activities are there for the kids.

On Nikloosdaag, the festival of Saint Nicholas, children receive presents from St. Nicholas and his sidekick ‘Père Fouettard’ (dressed in black and holding a stick to punish naughty children). Christmas markets are a big deal, brought over by the German influence and fully loaded with adorable gift huts, cozy caroling, and steamy festive mulled spiced wine. The largest is at place d’Armes in Luxembourg City throughout December up to Christmas Eve. As is the case every year, Luxembourg’s Grand Duke Henri gives his Christmas speech on Christmas Eve greeting citizens of the Grand Duchy.

New Year’s in Luxembourg is mild and pleasant, with many locals off on skiing holidays or beach spots, and internationals home for the holidays. But the place isn’t dead entirely – heading into Luxembourg City for the night has its perks such as an ice skating rink and luxury hotels putting on ritzy dinners with champagne.

Luxembourgers love Three Kings Day (Dräikinneksdag) because its main duty is to eat the traditional Twelfth Night pastry cake. Also known as the Feast of the Epiphany, whoever finds the bean hidden inside the cake is made ‘king’ or ‘queen’ for the day. The cake itself is a pastry tart filled with frangipane almond filling.

The English translation of Liichtmëss is Candlemas. In the evening children carrying liichtebengelchen (lanterns) go around their neighborhood singing a traditional song about the festival of lights at the houses they visit. In return, they receive sweets. These liichtebengelchen are more like lightweight lamps and are handmade or bought in a variety of colors, sizes, and shapes.

Luxembourg’s carnival comes to shake out all the vices for one last pre-Lent celebration. Like its neighboring countries of Germany, Belgium, and the Netherlands, Carnival is one great party weekend to dress up in silly costumes and party, with of course the reasoning that the good times will be sacrificed for upcoming Lent. The Luxembourg carnival, known as Fuesent, traditionally begins on Candlemas and ends on Aschermëttwoch (Ash Wednesday).

The best road trips in and around Luxembourg 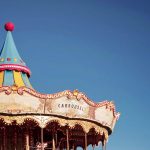 Recreation spots for children in Luxembourg