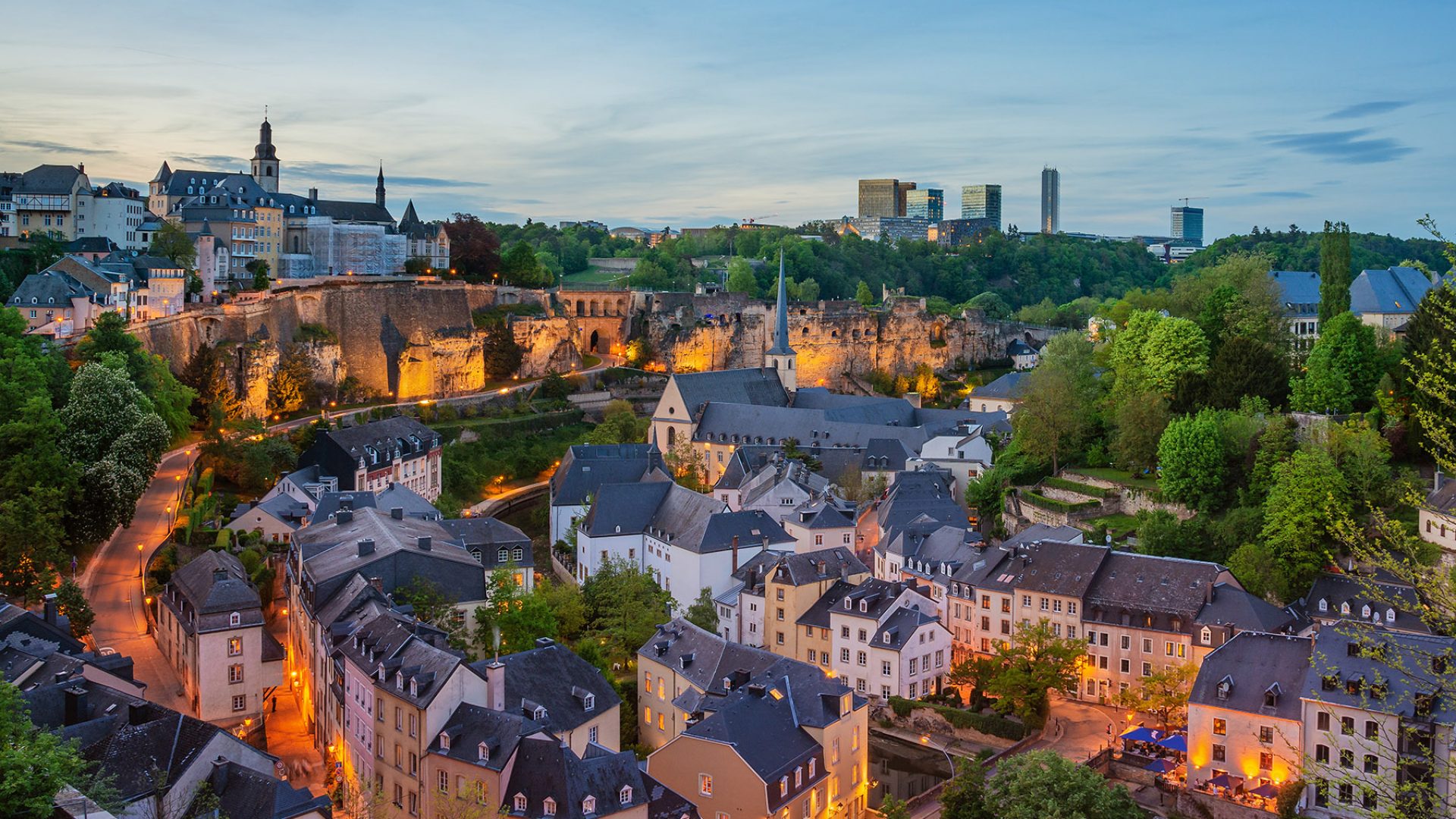 Home Moving to Luxembourg Where to Live The best neighborhoods in Luxembourg City
Last update on March 01, 2022
Share

Lying at the heart of Western Europe on the confluence of the Pétrusse and Alzette rivers, Luxembourg City may be small in size but not in character. The Luxembourgish capital is a true melting pot of cultures not least from its close vicinity to Belgium, France, and Germany, but also due to Luxembourg’s role as an international financial center and the official seat of several institutions within the European Union. Many foreigners chose to rent in Luxembourg City or even buy property in Luxembourg City because it’s where most foreigners find jobs in Luxembourg.

Divided into 24 quarters or quartiers, there is a diverse selection when looking where to stay in Luxembourg City whether you want the taste of bustling metropolis life, green spaces, history, art or culture. Deeply rooted in history, Luxembourg City’s old quarters and fortifications – a throwback to when it was one of Europe’s greatest fortified cities – have been listed as a UNESCO World Heritage site since 1994.

Luxembourg City is the most populated commune of the Grand Duchy (115,200 inhabitants in 2016) and the prosperous financial city is no stranger to expats and international visitors. Foreigners of more than 170 nationalities make up some 46.7% of the country’s population — most of whom stay in the capital of Luxembourg City. This high demand, however, has influenced Luxembourg City to become the second most expensive city in Europe. Over the last year alone, apartment rental prices rose 3.1%, and the average cost of a one-bedroom apartment was around €1,230 in 2016. A lot of people decide to live in neighboring Belgium, France, or Germany to avoid high house prices.

Housing and hotel prices are more expensive within the city center and decrease as you go towards the suburbs. The city’s small size and excellent transportation system makes commuting a popular and efficient option when looking where to stay in Luxembourg City. Rentals in Luxembourg are usually unfurnished but there are some furnished exceptions, particularly in the market of short-term and holiday lets.

Luxembourg’s international schools and most international organizations are in the capital; consequently, this is the most popular city amongst expats. Living in Luxembourg City offers some pleasant districts, alongside neighboring communes for those looking farther afield. Due to the size of the country commuting is rather easy, so if you decide to work in the capital but live outside check first about driving in Luxembourg or Luxembourg’s public transport connections.

Grund is located downhill in the historical heart of Luxembourg City, and is a popular area for those looking where to stay in Luxembourg City among it all. The hotel and rent prices are higher but the views are magnificent. If you decide to stay in the middle of the city center instead, you will still enjoy views of the UNESCO World Heritage area of Grund. This is the most multicultural area, with plenty of restaurants, bars, and sports clubs.

There is also the Gare, or railway station, area. There are hotels, restaurants, and nightclubs around the station, though the center areas of Clausen and Hollerich are more popular locations for nightlife. The area is linked to the center by a bridge. Otherwise, there are many areas further out, detailed below.

Below is a summary of where to stay in Luxembourg:

Where to stay in Luxembourg City center

The center is the historical and entertainment hub and where most visitors usually head when first looking where to stay in Luxembourg City. Its medieval charm, however, contributes to the highest housing prices in the city, with the average apartment priced around at €435,600. In the past 30 years, the center has witnessed a steady decline in population due to staggering property prices and the lack of proper residential amenities.

Ville Haute (or the Old Town) is instrumental in the city’s UNESCO World Heritage status, home to architectural wonders and prestigious buildings and monuments such as the Grand Ducal Palace, Place d’Armes, Place Guillaume II, Notre-Dame Cathedral, and Constitution Square, which are all within walking distance of each other.

Downhill from Ville Haute, Grund is a wealthy neighborhood where magnificent views compensate for its high housing prices. It is one of the liveliest and most multicultural areas for living in Luxembourg City. Boasting a wide selection of pubs, restaurants, and bars, Grund draws a huge crowd at night, which might not ideal for those seeking quiet spaces.

Another affluent area is Clausen, just north of Grund. With the same lively energy, this vibrant area has recently grown in popularity due to an increase of bars and restaurants and its restored brewery area. Like Grund, growing visitor traffic means it’s more suited to those who like activity and bustle.

Gare is the neighborhood around the city’s central train station. Its attractive boulevards are a hub for business, shopping, and dining but the amount of people constantly passing through the area gives some parts a slightly bad reputation – but you shouldn’t be swayed as it also contains some of the city’s most interesting places, and prices are slightly lower than other central neighborhoods in Luxembourg City.

Where to stay in Luxembourg City’s northern quarters

Kirchberg is perhaps one of the most popular places where to stay in Luxembourg City. Known locally as the European Quarter, the modern yet still residential business district is home to several European Union institutions and other important organizations, such as international banks and the University of Luxembourg.

Kirchberg offers a lot of facilities for expats, with the nearby D’Coque arena, the country’s biggest sports venue, the Grand Duke Jean Museum of Modern Art and the national concert hall Philharmonie Luxembourg. The area is dense with commuters during the day but has a tendency of feeling slightly lackadaisical at night. It’s popular with EU employees who work nearby but high property prices, one of highest in the country, has led many to opt for neighboring quarters, such as cozy Wiemerskirch and nature-friendly Beggen at the northern edge, which are reachable by a short commute.

Dommeldange is also an option for living in Luxembourg City. Despite being a bit of a hike from the city center, it’s enticing to expats due to its village feel mixed with rising newbuild apartments.

Where to stay in Luxembourg City’s eastern quarters

Luxembourg City’s eastern quarters are also popular with the international crowd living in Luxembourg City due to its proximity to the center and Kirchberg and relatively cheaper housing. The area is also relatively close to the airport. Upmarket neighborhoods such as Hamm and Cents are favored by families for their peaceful, more rural feel. Hamm has access to international schools in Luxembourg, such as St Georges International School, the beautiful Itziger forest and running and biking trails, while Cents has the advantage of reputable sports facilities and a string of trendy shops.

Down in a valley is Neudorf-Weimershof, an area that has become increasingly attractive to expats looking for affordable places in Luxembourg City. While it’s not as upscale as its neighbors due to less sunlight from its valley location, it remains ideal as it sits right beside Kirchberg. A lot of houses within this quarter have been restored and some homes have been torn down to give way to newer but smaller apartment blocks.

Where to stay in Luxembourg City’s southern quarters

Bonnevoie in the south is the largest district in the city and one of the top residential choices for families living in Luxembourg City. Divided between North Bonnevoie-Verlorenkost and South Bonnevoie, it is akin to a village but has increasingly become dynamic with excellent transportation networks, good amenities in the form of schools, cultural centers, and various cafes, and public green spaces such as the Kaltreis water tower park and Alzetter valley. The area has a lively and friendly vibe due to a tight-knit community of property owners and its growth is predicted to continue with new developments, such as new residences and the creation of more green spaces, cycling paths, and pedestrian routes.

Although a bit farther from the heart of the city, Gasperich is another pleasant southern neighborhood. It has many comforts such as shops, restaurants, and facilities such as a multilingual children’s library. It typically draws residents who want to stay ‘in ville’ but with more space and perhaps a garden for a lower budget. It’s also the location of the new 80-hectare mixed real estate development called ‘Ban de Gasperich’, which will be filled with residential and office buildings, a stadium, shopping center, and transit links. It’s forecasted to welcome around 3,000 residents and 20,000 workers in the future.

Farther out from Gasperich, Cessange, like Hamm and Cents in the east, suffers from airplane noise. This slight shortcoming, however, has opened up a market of big properties at lower costs.

Straddling Cessange and Ville Haute is Hollerich, a neighborhood famous for its nightlife. You will find rich diversity in this area not only with its landscape but also its cultural makeup. Its southern part consists of industrial and public buildings while the north is dominated by Parc Merl, one of the largest parks in Luxembourg City. Apartments are scattered from east to west and inhabited by people from all ages.

Where to stay in Luxembourg City’s western quarters

A stone’s throw from Ville Haute is Belair, an upscale quarter complete with blocks of charming townhouses, designer shops, gourmet restaurants and family-friendly spaces such as Castle Park and Park Merl. These remarkable features, however, come with a hefty price tag and Belair is one of the most expensive quarters for living in Luxembourg City. Climbing property prices and homes used for business purposes have been slowly ‘driving out’ residents in recent years. To remedy this, the city has been planning to improve green spaces among other projects.

North of Belair is Limpertsberg, an area popular with students and young professionals who enjoy a more ‘underground’ atmosphere. The area has a lot of character derived from a mix of funky architecture and gorgeous terraced townhouses. It’s within walking distance to the city center and claims iconic landmarks such as the Grand Théâtre de Luxembourg, Grand Duchess Charlotte Bridge, and the spacious Parc Toby Neumann within its limits.

Merl is another green area in the west that’s ideal for families. Its low levels of urbanization give way to wider expanses of vacant land, some of which have been repurposed into parks and areas to enjoy horse riding. 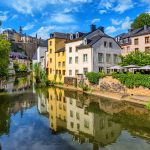