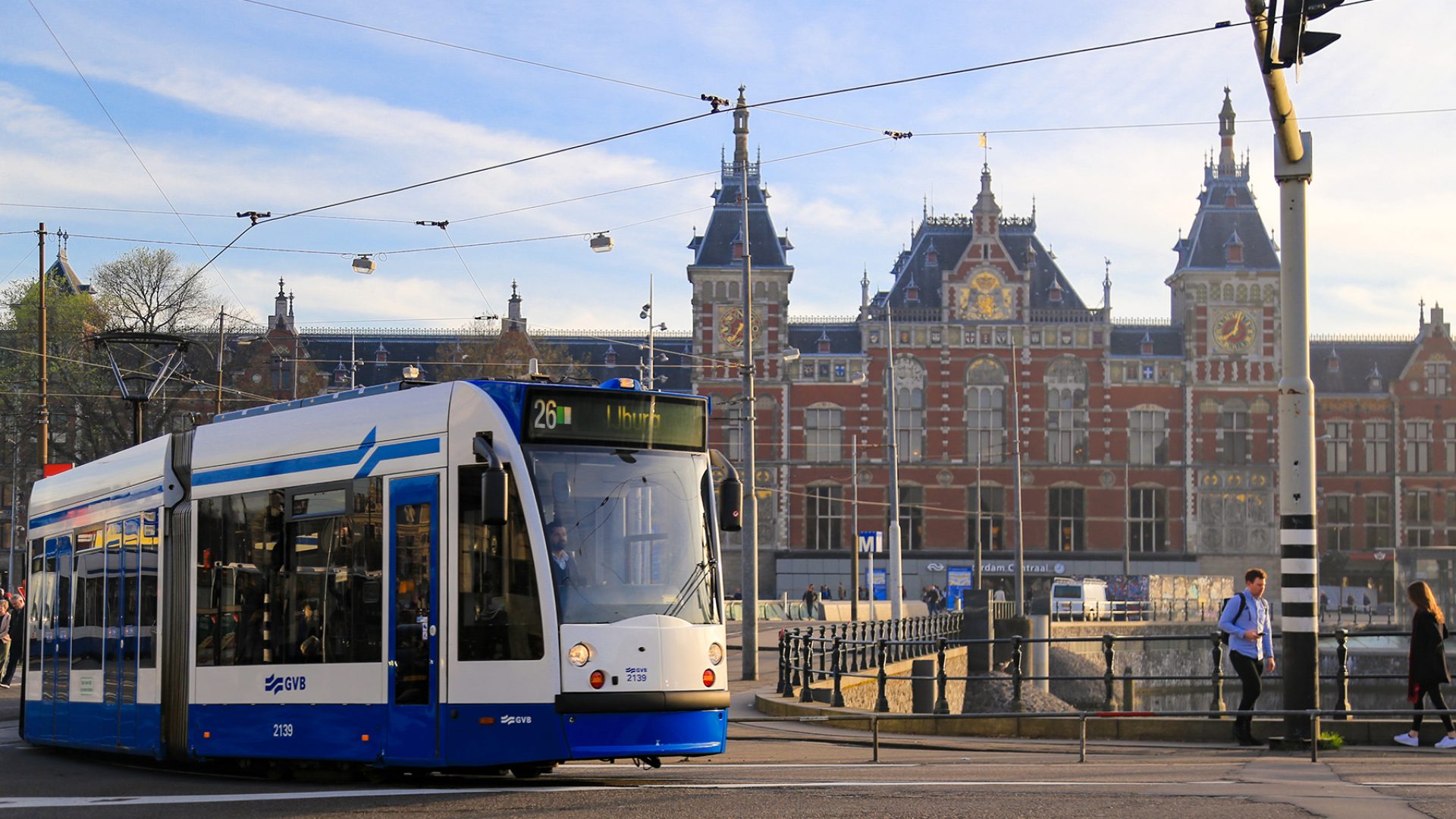 Guide to public transport in the Netherlands

Thinking beyond your bicycle? Learn everything you need to know about trains, buses, metros, and more with our guide to public transport in the Netherlands.

For many expats arriving in the Netherlands, Dutch transportation means one thing: the bicycle. But while the Dutch have created the best cycling infrastructure in the world, they’ve also done some great things with their public transit system, too. Whether you’re looking to take a train to Tilburg or a bus to Bloemendaal, it’s easy getting around the country. To help you on your way, this guide to public transport in the Netherlands includes the following information:

Need to get from A to B without taking public transport? Whatever your needs in the Netherlands, Sneleentaxi can help get you there. The private-hire taxi and ride-sharing service operates across the Netherlands, providing an easy-to-use platform that connects drivers and passengers. Whether you’re going to Heerlen or Haarlem, Sneleentaxi can help get you there.

Generally speaking, the Dutch public transport network is clean, efficient, and relatively cheap. The local train network – operated by NS (Nederlandse Spoorwegen) – covers much of the country and you can move between towns and cities cheaply. Other towns and villages are connected by bus links, while the northern islands have ferry access.

In larger cities, you’ll find either a tram or a metro system (or both), while smaller cities and towns will have bus networks connecting suburbs with central areas. These networks are operated locally. However, wherever you are in the Netherlands you’ll be able to use your OV-chipkaart, the national smart-card payment system for public transport. Disabled travelers are generally well-catered for, and public transport stops and stations are usually near each other. This lets you seamlessly move between transport modes during your journey.

The first thing you need to know about when it comes to taking public transport in the Netherlands is the OV-chipkaart. The OV-chipkaart (OV stands for openbaar vervoer, or public transport) is the Dutch smart-card payment system that operates across the country for all public transport options. There are two types of OV-chipkaart: anonymous and personal. Anonymous cards can be bought and topped-up from machines and ticket offices at train and metro stations. Personal cards need to be bought online, and you will need to provide a photo for the card. These cards can be topped-up online or at a ticket machine. Alternatively, you can sign-up for automatic top-ups when your balance falls below a certain amount.

Journey costs are determined by the distance of your journey. When you check-in, a “boarding fare” is debited from your card. This fare varies depending on the mode of transport. When you check-out at your destination, you will then be refunded this boarding fare, minus the charge for the kilometers you’ve traveled. If you fail to check-out, you will have to pay the whole boarding fare, which could be up to €20. For more information, visit the OV-chipkaart website.

Top tips for using your OV-chipkaart

Before you use your OV-chipkaart, here are some things you should know:

Taking a bus in the Netherlands

As in many other countries, the bus is the most common form of public transport in the Netherlands. Whether you’re living in a rural area away from the rail network or traveling around towns or cities, it’s likely that a bus will be your best bet. But that’s not a problem, because Dutch bus services are generally pretty efficient.

The operators of Dutch bus networks vary across the country, but you’ll be able to use your OV-chipkaart on all of them. Some buses run on more local routes, often stopping both in and outside urban areas. However, recent years have seen more direct intercity bus lines set up that connect popular areas. Many commuters use these and often find them quicker and more convenient than the train.

Top tips for traveling by bus in the Netherlands

Getting on the bus? Read these tips beforehand:

Coach travel in the Netherlands

The Netherlands is a relatively compact country, so you might not think of hopping on a coach when considering moving between its major towns and cities. However, coach travel can be a convenient – and cheaper – alternative to taking the train or hiring a car. Companies like Flixbus offer competitive rates and cover the country’s largest towns and cities.

International coach travel is also an option in the Netherlands if you’re thinking about traveling across the border. International operators like Megabus and National Express offer services to the UK, while Eurolines connects major Dutch cities to destinations across Europe, from Lisbon in the west to Bucharest in the east.

Top tips for coach travel in the Netherlands

Check out these tips before traveling by coach:

Traveling by metro in the Netherlands

Sometimes life on the surface can get too much and you need to head underground. Thankfully, the Netherlands has you covered with not one, but two (partially underground) metro systems operating in the country. The most expansive Dutch metro system can be found in Rotterdam/The Hague, serving 70 stations over five lines. Amsterdam’s network is smaller, with 39 stations across five lines.

Due to the popularity of cycling and the compact nature of these cities, the Dutch metro networks are relatively quiet compared to other metro systems like those in London, New York, or Tokyo. However, it can get busy. This is particularly evident during bad weather when locals leave their bikes at home and take the metro. Therefore, be prepared for a busier journey during these days.

Top tips for traveling by metro in the Netherlands

Read these tips before heading underground:

Train travel in the Netherlands

When it comes to traveling long distances in the Netherlands, the train is by far the most popular form of transport for the locals. This is largely due to the quality of the local network, which is one of the busiest in the world. Most of the country is within easy access from the rail network, although connections are generally more limited in the north of the country.

Dutch trains are operated by NS (Nederlandse Spoorwegen). There are two types of NS trains to look out for: the Sprinter and the Intercity. Rather confusingly, the Sprinter is the slower of the two, stopping at all local stations. Intercity services, on the other hand, only stop at major stations, ensuring a quicker and more comfortable journey.

Top tips for train travel in the Netherlands

All aboard? Not before reading these top train travel tips:

Traveling by tram in the Netherlands

If you want to take in the beautiful Dutch streets while not actually walking or cycling, there are few things better than taking the tram. The four largest cities in the Netherlands each have their own tram system: Amsterdam, Rotterdam, The Hague, and Utrecht. Of these, Amsterdam has the most extensive network, with 500 tram stops along 15 lines.

When it comes to public transport in the Netherlands, trams are generally the quickest way to move through crowded city centers. However, they also double up as excellent ways to see the city. In fact, National Geographic hailed Amsterdam’s tram 2 as one of the world’s best tram routes. Starting at Centraal Station, it showcases some of the city’s best attractions, including the Royal Palace and Rijksmuseum.

Top tips for taking the tram in the Netherlands

Ferries in the Netherlands

Ferries might not be your first port of call when you think about public transport, but in the Netherlands, your nearest one might be your best option. In Amsterdam, free ferries transport cyclists and pedestrians across the IJ. Services run all night and offer an unmistakably Amsterdam experience should you be looking for one.

However, these aren’t the only ferries in the Netherlands. Along some rivers, you’ll find pedestrian and cycle ferries making the crossing. Some are manned, while others you have to operate yourself. There are also ferries connecting the mainland to the northern islands, such as Texel. Check ahead to avoid disappointment, particularly if planning a cycling trip as you may need to detour over the nearest bridge if the ferry isn’t running.

Top tips for traveling by ferry in the Netherlands

With all these transportation options – as well as walking and cycling – you might not consider taking a cab. But for many situations, taxis can be the most convenient form of transit. Luckily, it’s fairly easy to catch a taxi in the Netherlands, as most towns and cities have taxi ranks near prominent attractions, stations, and ports.

Taxis in the Netherlands are metered and, generally speaking, charge similar rates. Alternatively, you can negotiate a fixed-fare with your driver before you start your journey. Shared taxis are available in many Dutch towns, although you won’t find them in the larger cities. It’s also worth noting that Uber only operates in the largest Dutch cities.

Top tips for taxi travel in the Netherlands

Flying to warmer climes? You’ll probably be departing from one of the Netherlands’ five airports. These can be found in Maastricht, Rotterdam, Groningen, and Eindhoven. However, the largest Dutch airport by far is Amsterdam Schiphol. One of Europe’s busiest airports, Schiphol is a short train ride from central Amsterdam and has flights around the world.

Due to Schiphol’s proximity to Amsterdam, accessing the airport is easy and can be done via train or bus. Schiphol is well-connected to other parts of the Netherlands, meaning that many locals will fly into Schiphol and take a train for their onward journey home. Plans to expand Lelystad Airport in Flevoland are currently ongoing.

Don’t jet off before reading these top airport tips: