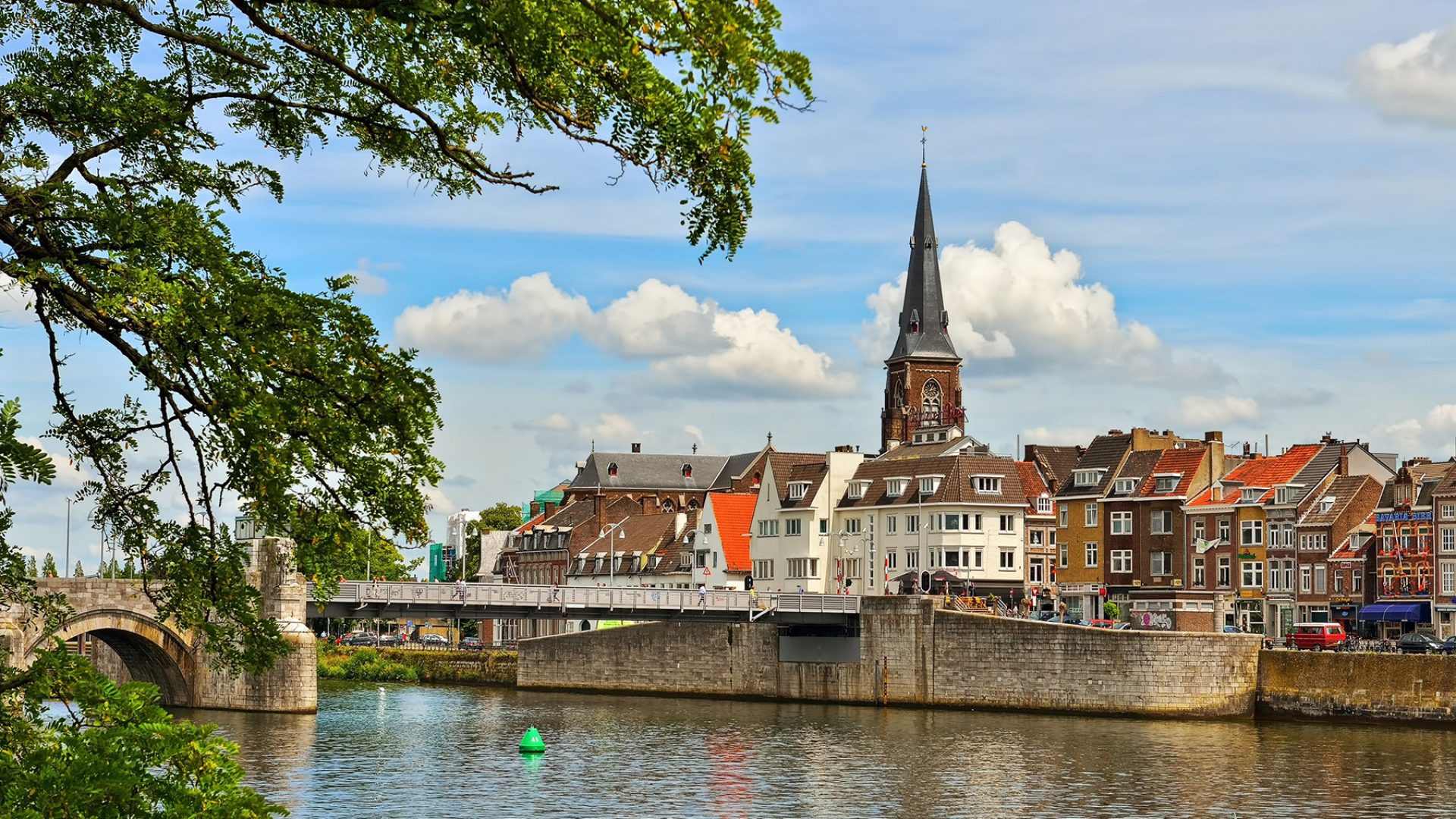 Home Moving to the Netherlands Where to Live Where to live in Maastricht
Last update on July 13, 2021
Share

Find the best places to live in Maastricht, the capital city in the southern province of Limburg that offers some of the top sites in the Netherlands.

Maastricht is located in the very south of the Netherlands, but right in the heart of Europe bordering Germany and Belgium. Maastricht is a city with an international environment that combines top technology with high life-quality. It also has some of the best historic sites in the Netherlands, comprising the second highest number of heritage sites in the country, after Amsterdam.

Maastricht is the capital city of the Dutch province of Limburg, and is well-connected to many main European cities: Aachen, Cologne, Frankfurt, Brussels, Antwerp, Paris, as well as cities in Luxemburg, are all nearby.

It’s a diverse and colorful city with great historical significance. Its impressive past is reflected in the picturesque historic centre and location along the Meuse river. The ancient but vibrant city of Maastricht remains a popular destination for the international community who come to the capital of Limburg for education and work.

The Maastricht University is the most international university in the Netherlands, with more than 45 percent students from abroad. In the hilly countryside new technologies on chemicals and new materials, life sciences and smart services are booming. The three Brightlands campuses in the region are at the heart of global innovation.

Maastricht is also centered in the Euregio area, which incorporates a collection of towns in the Netherlands and Germany that facilitate cross-border cooperation and activities.

Maastricht’s wealth of churches, mansions and treasure houses bear witness to its prosperous past, while the remains of the city walls and fortifications are relics of its more turbulent periods.

Artifacts on view in the city’s Bonnefantenmuseum provide evidence of Roman occupation of Maastricht during the rule of Augustus Caesar in the 1st century AD. Some 2,000 years ago it was an important Roman outpost called ‘Mosae Trajectum’, implying that it lay at the junction of the river Maas with roads leading to other Roman settlements. Merchants, farmers and traders gathered at this point and business burgeoned.

St Servatius, a bishop from Belgium, moved to Maastricht in the fourth century to establish a Christian community in the city. His legacy remains obvious with the oldest church and bridge in the city being named after him.

Later in the Middle Ages, the city became a trade centre prospering until the religious wars of the 16th and 17th century when the city was conquered and fell under the rule of the Spanish and later the French. Following secession in 1830 during the Belgian Revolution, Maastricht became the capital of Limburg, pledging loyalty to the Dutch kingdom under the reign of William I.

Maastricht remained a neutral territory during the First World War, resulting in an influx of refugees to the city. For the next 40 years economic hardship hit the city, which also suffered under German occupation during WWII.

Maastricht was also the birthplace of the Maastricht Treaty, which gave birth to the European Union and the euro currency.

Today, Maastricht is a vibrant cultural, educational, and political center full of bon vivants. Ceramics, paper, beer, and cement are its main products. Students from the six universities in the area add to the city’s vitality. The center of Maastricht is declared a protected area, and walking is the best way to enjoy it.

Maastricht is a popular destination for both local and foreign tourists. Churches, museums, parks, caves, and ancient ruins ensure there is something for all interests. Maastricht also has a full calendar of festivals and events throughout the year including the colorful three-day Dutch Carnival held in February. The attractive city squares are perfect places for sampling café food and drinks, relaxing and taking in the gezelligheid of Maastricht.

Combine Maastricht’s 20 centuries of history, art, culture, historic buildings, and tradition with a lively international atmosphere, pavement cafés, good food, shopping, and international education, and you’ll understand why the capital of Limburg is growing in popularity with expats.

What language is that?

Although Dutch remains the dominant language of the city, the local dialect, Limburgish, can still be heard. During the 18th century, French was the predominant language in the city, especially in upper-class circles. The French influence remains evident in some street names within the old city center. Nowadays, German is also widely spoken due to the proximity of Maastricht to the German border. Similarly, English is becoming more widely spoken, particularly in educational settings like Maastricht University where many courses are taught in the English language.

Getting to the city

Maastricht has its own airport referred to by locals as Beek, just 10km north of the city center. Another seven airports can be reached in less than an hour by car. The main train station is close to the Centrum. The smaller station, Maastricht Randwyck, is close to the university and business district.

High-speed trains stop in Maastricht en route to Amsterdam, Brussels, Frankfurt, Cologne, London and Paris. In addition to regular bus services, visitors to Maastricht can travel by boat from Belgium and the rest of the Netherlands and arrive at Beatrixhaven.

Historic buildings dating back to the 17th-century jostle with shops, cafes, restaurants and weekly markets in the center of Maastricht. Vrijthof square is a beautiful place to sit and enjoy the surroundings, and on the right day, an open-air concert or event. Daily, hundreds of people visit Onze Lieve Vrouwebasiliek (the cathedral) and the exclusive stores located in the Stokstraatkwartier. Encompassing city walls, university buildings, and the municipal park (Stadspark), the Jekerkwartier has an artistic slant that entices creative types and students.

Across the river lies the old neighborhood of Wyck, famous for specialty stores selling antiques, art, and delicious food. Further south is the new district of Ceramique, previously a large industrial ceramic manufacturing area.  Since 1995 the area has been developed into a modern residential, business, and museum district, favored by expats and locals wanting modern accommodation in an inner-city suburb with all amenities and services.

The inner-city harbor, ‘t Bassin, is found on the northwest side of Maastricht and encompasses the districts of Bosscherveld, Lanakerveld, Front Quarter, and some parts of Statenkwartier and Boschstraatkwartier. Since redevelopment started in 1999, this area has turned into a residential and commercial global village.

This green residential area sits along Jeker valley and St Petersberg Hill, yet is still within walking distance to the city center or into Belgium. The Sint Pietersberg tunnels – quarried into the marlstone to create underground shelter for protection against invasion by foreign forces – plus Marl Caves and St Pieter’s Fortare are all popular tourist attractions.

There are spacious surrounding landscapes decorated with vineyards, orchards and the occasional restaurant and hotel. Golfing, water sports and outdoor recreational activities are plenty for those who enjoy an active life.

Get an idea of Maastricht from the tourist office‘s video.

Buying a home in Maastricht

If the university city of Maastricht sounds like your type of place, then you may be considering buying a home in the southern city. Generally speaking, expats are able to easily buy a Dutch property. However, when getting a mortgage in the Netherlands, many use a mortgage advisor to help them through the process. This is especially helpful if you don’t speak Dutch and are new to the local housing market. Expat-friendly mortgage advisors operating in Maastricht include:

For more information on buying homes in Maastricht and the Netherlands in general, read our expert guide.