Thinking of moving to Munich? Our city guide to the Bavarian capital lays out everything you need to know for living in Munich.

Munich is a city of tradition, wealth, and of course beer. Occasionally it’s called the northernmost city of Italy. The first thoughts of Germany typically draw ideas of beer, pretzels, festivals, and lederhosen, although these things are most common to the state of Bavaria, where Munich is the capital.

Not only is Munich a great tourist destination, it’s also a popular place for expats from a wide array of industries. These include automotive, high-tech technology and electronics, film-making, as well as finance. It truly is a ‘laptops and lederhosen’ economy.

This guide, sponsored by Munich International School, sets out everything you need to know about Munich, including the following sections:

Munich continues to be ranked as one Europe’s most expensive cities, although it’s also consistently ranked as having one of the best qualities of life in the entire world. The central location also allows for ease of travel and the airport recently placed in the top five worldwide.

It should also be noted that apartments are listed as ‘warm’ or ‘cold’ to denote whether utilities and heating are included or not. Oftentimes kitchens are not standard, so it may also be wise to budget for purchasing appliances and cabinetry.

Public transportation is widely used and accessible, so it helps to be close to an S-Bahn or U-Bahn line. Rents are highest in the inner city in areas with each neighborhood having its own devotees.

Some popular neighborhoods to live include spots such as:

Where to find rental properties

While there is a seemingly endless supply of sources of information on accommodation, the Süddeutsche Zeitung and the Münchner Merkur are good starting points for exploring the city’s rental market. Immobilien Scout 24 is also a helpful online resource. Mr. Lodge is a furnished apartment provider with a multilingual team especially helpful for expats moving to Munich.

For those living in central Munich

For those living in the suburbs

Where to arrange a driving licence

Munich has a vast array of sports, regardless of the season, for both spectators and those that would like to be active themselves.

In addition to local teams, there is also an extensive network of vereine (associations) or clubs for virtually every imaginable sport. For starters you could consult this list of sport and fitness clubs.

As with any big city, Munich has plenty of educational options on offer. Some expat families will choose the local state school, while others will instead opt for international schools. These schools can offer a more internationally-focused curriculum and provide education in English and other foreign languages.

For even more information on choosing the right option for your child, read our guide to choosing a school in Germany.

It’s important to note that golfing in Germany requires a special licence, which may require additional certification.

For those looking to take a dip or to swim for more regular exercise, there are about 17 public swimming pools dotted across Munich. The biggest is Olympia-Schwimmhalle at the Olympiapark. It costs €3.90 and €3 for students for three hours or a day pass can be purchased for €7 and €5 for students. A family day ticket can be purchased for those with children 13 and younger for €14.80.

If you are interested in swimming against a rather dramatic backdrop then you should try Müllersches Volksbad (Müller’s Public Baths), Rosenheimer Strasse 1. Completely renovated, the baths were designed in the early 1900s. Admission is €3.80 and €3 for students. It should also be noted that they have a wonderful sauna.

For a map showing your closest pool visit: www.swm.de.

There are also several popular swimming areas in lakes and rivers in Munich including in the Isar River, which cuts through Munich. For those wanting to swim in lakes there are Feringasee, Fasaneriesee, Feldmochinger See and Lerchenauer See. Apart from taking a dip they also provide great opportunities for picnicking, sunbathing and just hanging out.

The people of Munich are rather fit, despite the carb-heavy cuisine and litres of beer. At last count there were more than 90 major gyms spread across the city which means competition among gym operators can be tough. That of course is good news for anyone wanting a membership. The name of the fitness game is negotiation as many gyms will be prepared to do all sorts of deals.

Many of the gyms are parts of chains and offer different services with some of their premises more spacious than others and including extras. When signing up you should ask whether membership entitles you to entry to the company’s other gyms which are often also in other cities.

Some of the most popular gyms in Munich are:

Germany is slowly making progress with its supermarkets stocking a selection of products from all around the world as well as independent stores stocking a range of products from various countries. However, if you’re not able to find certain products it may be worth looking at a speciality store. Here is a small list of stores throughout the city. 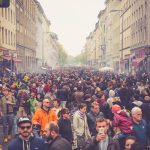