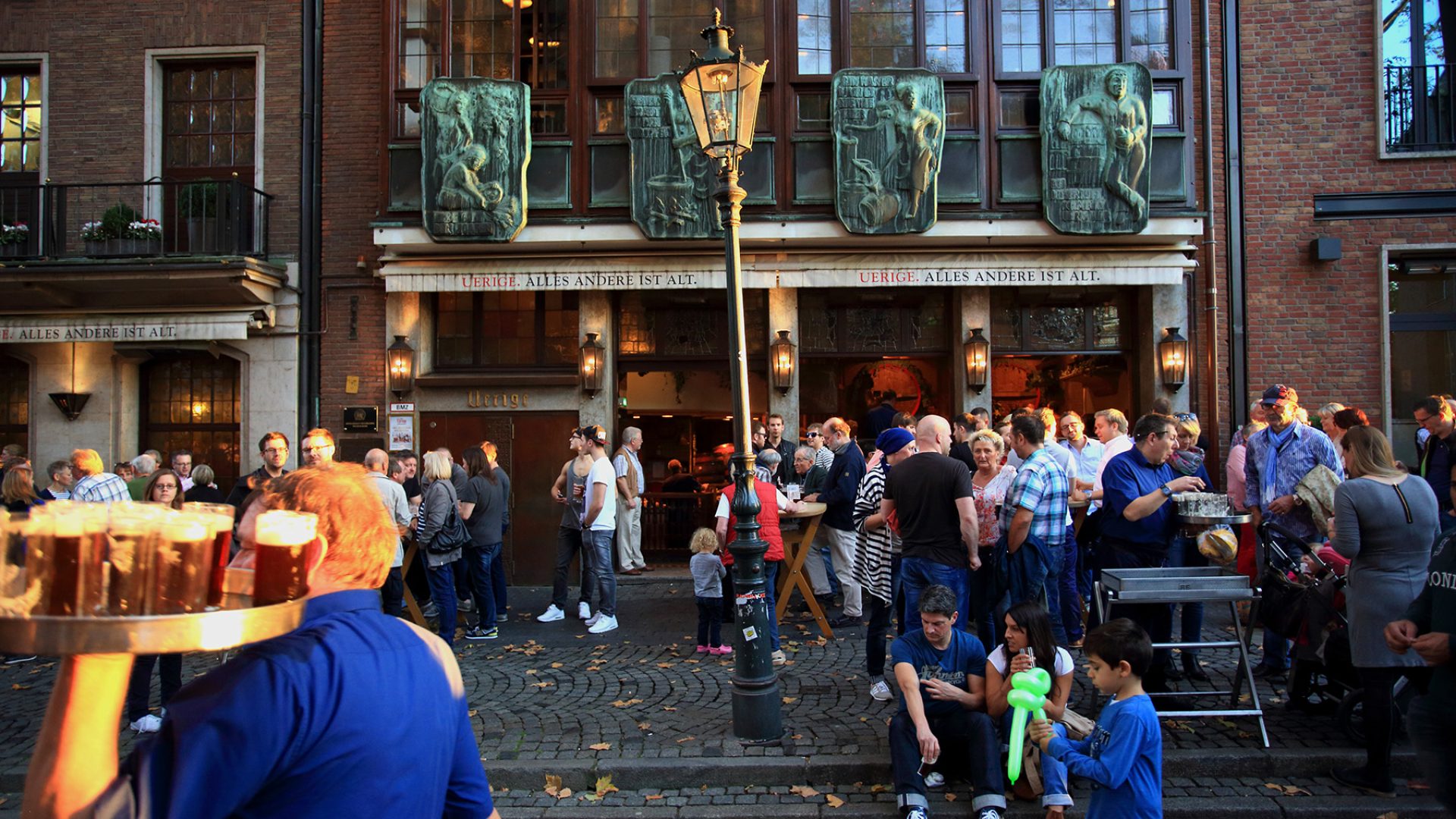 Few countries are as well-renowned for their brewing traditions as Germany. Learn more about the history of German beer, popular styles, and the local craft beer scene.

Let’s be honest: Germany’s best export comes in liquid form. While Germans will drink just about any alcohol-based concoction you put on their coaster, nothing comes close to beer when it comes to drinking in Germany.

Brush up on everything you need to know about beer in Germany, including topics such as:

Get your favorite new German beers delivered straight to your door with Beerwulf. The online beer specialist has a wide range of the best brews from Germany, Europe, and beyond. If you're looking for that top tipple, check the Beerwulf web store today and find out what you'll be toasting with next.

The history of German beer

The early days of beer in Europe had a strong connection with the church, and Germany was no different in that regard. Between about the ninth and thirteenth centuries, monks were the primary producers of beer across what is now Germany. Monastic-made beers were usually quite high in alcohol and spice content, partially to prevent spoilage; these qualities actually remain today (albeit in a modified form) in the Trappist beers from neighboring Belgium. Brewers in Germany gradually started using more herbal recipes (known as Gruit) with no hops during the Middle Ages, a trend that lasted until one of the world’s most famous food production laws came into effect.

What was the law in question? The most widely-known regulation on German beer: the Reinheitsgebot. Written in Bavaria in 1516, the Reinheitsgebot (literally, ‘purity order’) decreed not only the maximum price for a beer but, most crucially, the only ingredients for beer: barley, hops, and water. This declaration of quality and simplicity in beer production spread throughout Germany, with many cities and regions enacting equivalent laws. Modern adaptations to the Reinheitsgebot added yeast (whose role in brewing wasn’t known in the 16th century), more malted grains, sugar, as well as some exemptions for certain beer styles.

Today, Germany grows more hops than almost anywhere else in the world. In fact, the Bavarian region of Hallertau grows about 30% of the planet’s hops, while a few other regions across Germany focus on more specialized hop varieties. Malt producers are also widespread, having prepared the grains to fit within the confines of the Reinheitsgebot for about 500 years.

Where do Germans drink their beer?

German cities, towns, and villages are all swimming with places to enjoy a local beer. Bars, restaurants, and even corner stores offer everything the prospective drinker needs: a seat, an ice-cold beer, and something to snack on. One of the most iconic places to quaff a German beer is a Biergarten (literally, ‘beer garden’). German beer gardens are often operated by the breweries themselves, only serving their own brews and giving drinkers the chance to enjoy a brewery’s range at communal wooden tables under shady trees.

A Biergarten isn’t just about the beer and the atmosphere, though; they’re often great places to dig into traditional German food like Schweinshaxe, Spätzle, or Flammkuchen. However, some beer gardens only offer lighter fare in the form of Brezeln (pretzels) or Brotzeit (usually a sharable plate of bread, cheese, and meat). While delicious, pretzels aren’t nearly as fulfilling as the döner kebab that many locals go for afterward.

Of course, when the German winters draw in, you may prefer simply staying at home with your favorite brew. Thankfully, it’s pretty easy to buy beer in Germany. Many locals stock up at their nearest supermarket as part of their weekly grocery shop. However, there is an ever-growing number of online German beer stockists, including:

Not only do these online stockists have a surprisingly wide range, you’ll also be able to get your favorite brews delivered straight to your door.

The world of beer in Germany is eclectic, ranging from pale beers such as Pils and Helles to the rich and malty Dunkels and Bocks. Germany is also home to sour styles like Berliner Weisse and even smoked beers that taste like ham. Here are three of Germany’s most iconic beer styles.

After German-style pilsener, the Hefeweizen is arguably Germany’s most well-known liquid export. A Weizenbier (literally, ‘wheat beer’) is the catch-all term for beers made by partially replacing some of the barley with wheat, which includes a few other styles like Kristallweizen (which is filtered and generally clear) and Dunkelweizen (which uses darker malts). Hefeweizen in particular means that the beer is unfiltered, giving the beer a cloudy appearance. These beers are full of aromas and tastes you wouldn’t normally expect from a beer; think banana bread, clove, and vanilla. A Hefeweizen is usually a bit sweet and fruity, making them a good introduction to Bavarian beer.

A German Hefeweizen beer typically comes in an iconic vase glass that looks almost like a barbell with a narrow neck. The bulbous top of the glass is ideal for capturing Hefeweizen’s distinct aromas, as well as containing the massive amount of head produced during the pour. These glasses are fragile at the top but sturdy at the bottom; as a result, locals tend to clink the bottom of the glasses at the start of a fresh round.

A few of the more renowned Hefeweizen brewers in Bavaria include:

Many German beer styles have an intimate connection to the place that they’re from and Altbier is no exception. Altbier (literally, ‘old beer’) hails from the western city of Düsseldorf. Indeed, brewers here use the historical top-fermentation method, actively defying the modern trend towards fermenting from the bottom. A great Altbier is a delicate balancing act: these beers are full of grainy malts and fresh hops while remaining smooth and reasonably bitter. Breweries pour these copper-colored beers from wooden barrels.

At Düsseldorf’s most typical of Altbier purveyors, there is often only one beer on the menu. Waiters carry around a round, metallic tray with a handle in the middle (known locally as a Kranz) loaded with glasses (Stangen). If you need another beer, the process is simple: when waiters see an empty Stange, they simply replace your drained glass with a full one and write another tally on your coaster. Once you’re ready to pay, just place the coaster on top of your empty glass and the waiter will settle your bill.

Some of the more popular Altbiers in Düsseldorf are available at breweries such as:

Even though Kölsch may seem like a regular lager at first glance, this German beer is anything but. Brewers in Cologne use top-fermenting ale yeast and cold conditioning to make a crisp and wildly quaffable beer. Not just anybody can brew a Kölsch, though. In fact, Kölsch has a Protected Geographical Indication from the European Union, and the rules for what beers can bear the name are set out in the 1986 Kölsch Konvention. As a result, a Kölsch must be pale, hoppy, bright, top-fermented, and brewed within 50 kilometers of Cologne.

Despite the big difference in style from Altbier in nearby Düsseldorf, the Kölsch drinking experience is identical in Cologne. Breweries serve one kind of beer from the same trays and use the same method for keeping track of your consumption. The only difference is how easy these beers are to drink; Kölsch’s crisp and refreshing texture means you might be able to put back a few more than you would down the road in Düsseldorf.

A few of the most well-known Kölsch brewers in Cologne include:

Craft beer and homebrewing in Germany

Germany’s longstanding traditions when it comes to brewing beer mean that ‘craft’ has a slightly different meaning here. Despite the diminished role of the Reinheitsgebot, many breweries continue to follow these historical rules, limiting the variety of their own selection. In Germany, it’s hard to say that a village’s old, family-run brewery with local ingredients isn’t craft beer.

Germans are nonetheless thirsty for fresher options. Younger drinkers especially show an interest in locally-brewed craft beer, powered by the increased availability of foreign styles like India Pale Ale (IPA). On the one hand, plenty of German breweries are keen to produce something completely new and trendy; many of the best craft breweries in Germany focus on hop-heavy IPAs or sticky imperial porters. On the other hand, Germany’s rich brewing tradition is inspiring craft breweries to revive old local styles; sour beer styles like Berliner Weisse, Gose, and Lichtenhainer are all the rage with their endless array of fruit additions.

Some of the most trendsetting German craft breweries include:

Homebrewing is also on the rise in Germany. Brewing beer at home is legal in Germany, with limits. Homebrewers can brew up to 200 liters annually; brewing more than that means taxes apply. Unlike countries such as Canada or the UK where homebrewing kits and equipment are widely available in supermarkets, German homebrewers need to seek out specialty shops catering to their needs. Making your own beer in Germany is also a great way to get around the Reinheitsgebot, especially if you live in a small city with a limited selection of brews.

Like many other countries, Germany’s best-selling beer brands are almost exclusively pilseners. A German-style pilsener beer (or Pils, as Germans call it) is generally light in color, crisp and bubbly in texture, and fairly bitter. As simple and easy-drinking tipples, these beers tend to come in half-liter bottles ideal for filling up the largest glasses in your kitchen.

As of 2015, the biggest-selling German beer brands were: