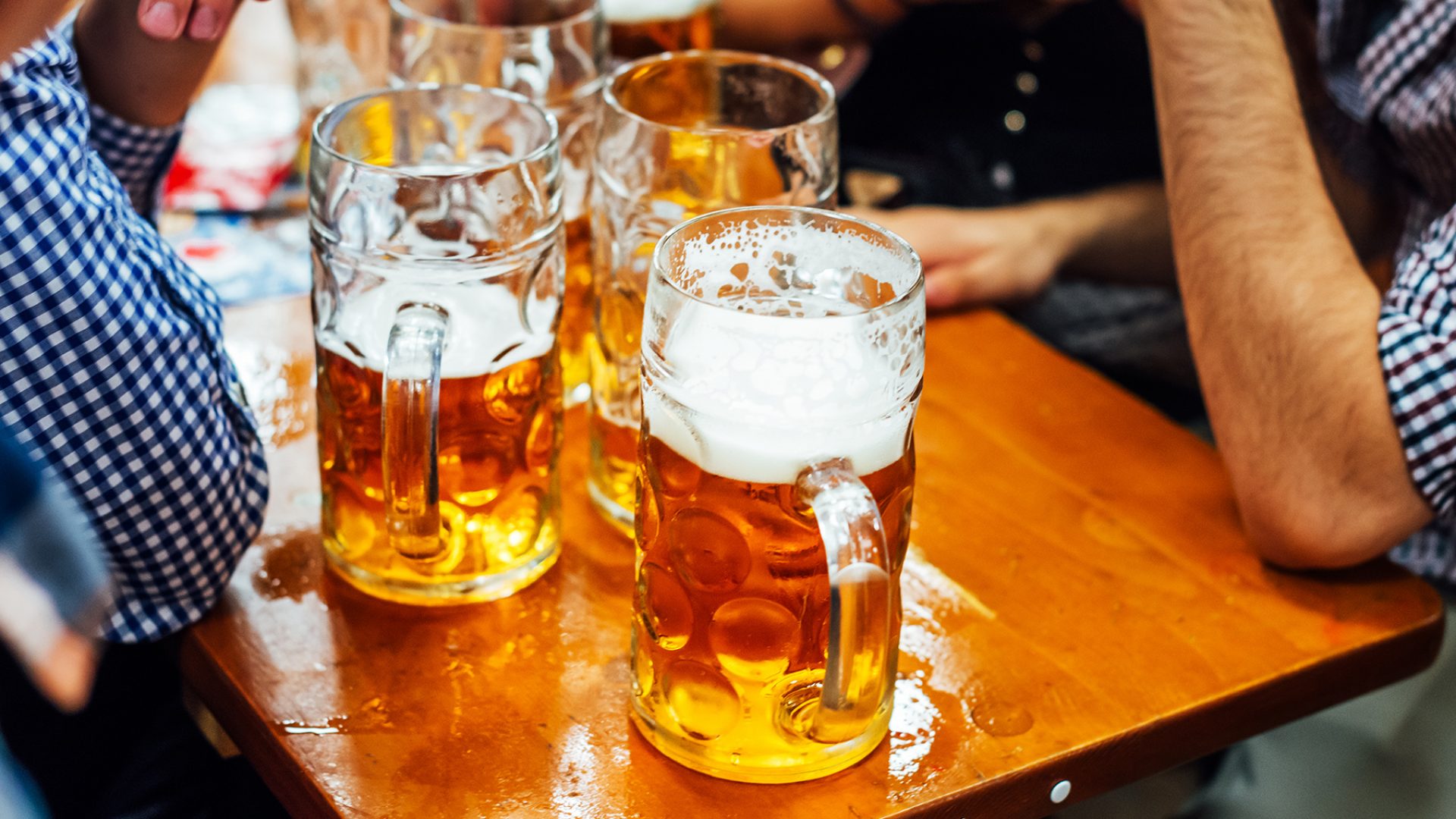 If you drink like a German, these 19 drinking habits will be like old friends. Learn more about the unique traits and habits that go with drinking in Germany.

1. You once had an awful Jägermeister phase

For a period, Jägermeister was your one true love and you wouldn’t settle for anything else at a party. Then unexpectedly, your true love turned on you and since then the mere thought of it evokes nausea. You now rely on wine and beer – they don’t make you puke so easily.

2. You panic when friends don’t catch eyes while clinking glasses

If you don’t look each other straight in the eyes, it’s a fact that both of you will be punished with bad sex for seven years – though nobody knows if that means bad sex with each other or with your actual partner. This tradition can become quite stressful if you’re drinking with a big group in Germany. You’ll probably miss looking in the eyes of at least one person, and it takes ages till you can finally take a swig of your beer.

3. Your panic heightens if people cross arms while toasting

Not doing this won’t result in bad sex for seven years, but crossing arms with the people on either side of you when clinking your glasses will bring bad luck – probably forever. These superstitions might be the reason why we Germans always come to parties so early. Otherwise we’d never be done with clinking before the end of the party.

4. You can open a beer bottle with anything

Spoon, knife, park bench, teeth, buttocks; once you’ve mastered the technique with one tool, the whole world is your playground. There’s just this one strangely-shaped, triangular thing that gives you a hard time – oh yes, the bottle opener.

5. Beer choices are a kind of religion

Thank God most of your friends drink the same sort of German beer. It’s probably a kind of evolutionary prevention mechanism so that you don’t lose too many friends in useless fights about whether pale beer, wheat beer or dark beer is better.

In an emergency, however, you’ll drink whatever is offered to you – as long as it contains hops and malt.

6. Only German beer is true beer

That’s the one thing you typically all agree on. From a young age you’ve learned this from your father, who learned it from his grandfather, who didn’t even know that there was something called ‘beer’ outside of Germany. We might not all have much national pride but we are proud of our German beer and being part of the nation that created beer in its present form. And you’ll fight anybody who disagrees.

7. But you are not exactly a wine connoisseur

The cheapest one on the lowest shelf in the supermarket will suffice.

9. You can’t trust your taste in music when drinking

While you’re usually known for your sophisticated music tastes, as soon as you’re slightly drunk, good old German Schlager music seems to be the best party music ever. That’s right, Schlager music — the cheesy, old-fashioned stuff that usually only your grandparents listen to.

If things get really bad, you even start dancing to Mallorca Schlager, where D–list celebrities try to extend their 15 minutes of fame to 20 minutes with the help of computer technology and high quality lyrics like, ‘And the red horse just turned around and fended the fly off with his ponytail. But the fly was not stupid and made summ, summ, summ and flew around the horse with a lot of buzzing. Schalala’.

Oh Germany, you country of poets and thinkers!

10. You know only a certain level of alcohol can make a German man dance

If, sometimes, it would be better for their dignity to just to stay in the corner and keep watching the party crowd from afar, is a point worthy of discussion some other time.

11. Drinking in Germany is not always just about getting wasted

More often it’s only a side effect of social gatherings. You just want to enjoy a good beer or a glass of wine with your friends, often together with a good meal. If it turns out to be one of those epic party nights, so be it. If not, you’ll be just as happy.

12. A Radler (basically) doesn’t contain alcohol and can be drunk at any time

A Radler (half beer/half lemonade) is said to be one of the most refreshing drinks there is. Also, you can easily get back on your bike after one litre (cyclist is Radler in German) without being too drunk to pedal in a straight line. Beer is food anyway, right? And beer with lemonade is just lunch with an alcohol-free drink.

13. You’re ecstatic when asked for ID while buying wine at the local supermarket

You forgot to put your makeup on and that’s the result. But to be honest, they’ve known you for years and probably just want to make you feel good about yourself by asking for ID. But still, it feels damn good to be considered for so much younger than you really are.

But not just the drinking part! There’s an old German movie from the early 1940s with the same name, Die Feuerzangenbowle. It starts with a couple of older gentleman drinking the rum punch and reminiscing about the good old days at school and all the pranks they played on their teachers. One of the men never had this privilege, as he was homeschooled. So in their intoxication, they decide to send him back to school. Shortly after he arrives, he becomes the nightmare of his teachers, as the story goes.

Especially at German universities, it’s customary to watch the movie at Christmas time, while — of course — drinking some Feuerzangenbowle.

15. No going out without staying in first

Drinking in bars and clubs in Germany is generally pretty expensive, so meeting at a friend’s place and pre-partying is common. Often you just get stuck there and have a better time than you could ever have in an overcrowded, sticky-floored club.

16. You are a master at pretending to be sober

In case you made it out of your friend’s house, you face the next challenge: most clubs don’t exactly appreciate it when their guests arrive drunk. Luckily, you’re amazing at pretending to be sober for the minute you have to look in the doorman’s eyes. This was also a very useful skill for sneaking back home when younger and your parents still thought you didn’t drink.

17. Being drunk turns you into an international culinary expert

American fast food, Turkish döner, Arabic falafel, Italian pizza, German currywurst. God bless German culinary multiculturalism — it’s cured so many hangovers. You also know exactly where you can get each food at which times. You might forget the way home, but you’ll never forget where to get food!

Though, thanks to the unpredictable weather, they more often turn into game nights in someone’s living room. Luckily, many German flats have a roofed terrace or balcony. As soon as you move out of your parent’s house, you know you’ll want the same for your own apartment.

Every December, you gain 5kg due to your daily mulled wine consumption at various German Christmas markets. There are just too darn many of them in Germany. And at least one of them lies on the way between your office/university and home.