If you are moving to Luxembourg here’s a guide on local and regional buses, taxis trains and all public transport systems.

Transport in Luxembourg is straightforward and easy to grasp. The rail network is expansive, the city buses are convenient, and everything seems to run efficiently. This article explores travel options available when looking at getting around in Luxembourg.

The main centre Luxembourg City is very compact and eminently walkable, but nevertheless has a well-organized web of local buses run by the Autobus municipaux de la Ville de Luxembourg to help get over the cliffs and ramparts in the old fortress city. Their site is www.autobus.lu.

Public transport in the rest of Luxembourg is cheap and transits everywhere apart from very secluded destinations. Services drop down on Sundays and holidays, so check the timetables when traveling Luxembourg city and the country on these off-days.

A ride on a city bus is a flat fare of EUR 2 per ride, which is a short time ticket (‘billet courte-durée’) that is valid for two hours from first use for the city’s entire public transport network. Travellers can buy a block of 10 short time tickets for EUR 16 which gives 20 percent off the normal fare. Validate each blank ticket with the machines on buses and train platforms.

A long-duration ticket (‘billet longue duree’) is EUR 4 or EUR 16 for a block of 5, valid all day until 8am the next morning, on any bus or local transit train. Locals use the e-Go card, a credit-card size ticket available for free at bus and train stations made to load up with. An e-Go card can be filled up to six times any on type of travel including packet deals, but it has to be the same choice six times. While the e-Go card does not offer a discount, the appeal is saving time spent buying tickets repeatedly.

You can order the ‘Nightrider’ nightbus (or www.nightrider.lu) to pick you up and drop you off anywhere in most of Luxembourg. In an effort to stop drunk driving, the service is like a taxi the size of a bus, and you may be sharing the journey with others. This service operates every Friday and Saturday night between 6pm and 5am. Order the bus by phoning (free phone) 8002 1010 at least 20 minutes before your intended departure, and if you know well in advance even better. Costs for this service are EUR 12 minimum for a one-way journey, and the maximum capacity is 8 passengers, taxis a 4 person maximum, tel. +(352) 900 7101 www.nightrider.lu.

A ‘network ticket’ or ‘day ticket’ (‘billet réseau’) is available at railway stations throughout the country and at the airport. It covers unlimited travel on all forms of public transport (city buses, trains and country coaches) for one day (until 8am the next morning) throughout the country. You may use the ‘day pass’ ticket in first class accommodation (available on trains, but not buses), by paying extra EUR 2.50, payable at railway stations and on the trains themselves.

Be aware that train connections are great in the south, but a bit more sparse north of Luxembourg City.  Only one main line (Line 10) runs through towns like Mersch, Ettelbrück, Wilwerwiltz, Clervaux and Troisvierges. The same tickets for buses are valid for trains with the same rates: EUR 2 for two hours (unlimited transfers) or EUR 4 for one day. A monthly ticket can be purchased at the CFL office in Hamilius next to the Post Office, at some news kiosks or at the station for around EUR 50. Trains in Luxembourg are mostly efficient, comfortable, cheap, and one of the best ways to soak in the scenery while travelling. People over 65 years of age and mini-groups (e.g., large families) can travel for half off. You’ll need to prove your age with your passport.

Luxembourg trains run at least once every hour to all stations at a consistent hourly time between 8am to 8pm. See the National Railway of Luxembourg (Société Nationale des Chemins de Fer Luxembourgeois) at www.cfl.lu for national train timetables and for national bus timetables. The app Mobiliteitszentral www.mobiliteit.lu gives an English-language option for public transport in Luxembourg.

Germany’s Deutsche Bahn (www.bahn.de) offers an email timetable delivery from all German stations, and many stations in Belgium and France, to Luxembourg. The Belgian Railways website is www.b-rail.be and the French rail service is www.sncf.fr. Reaching Luxembourg by train is a five-and-a-half hour trip from Brussels or Paris

Luxembourg is on par with the advancements in making travelling possible and easy for those with disabilities. Local buses in Luxembourg City have low-level entryways for wheelchairs for example. When traveling a longer distance, double check that wheelchair accessibility is also on board regional and long-distance buses.

Most main train stations are wheelchair accessible. If you want to be on the safe side, call the Luxembourg railway helpline at +(352) 49903737. Give an advance notice of assistance in need, from one hour up to two days ahead of time. If in a bind, the yellow telephones at railway locations are there for instant help.

By car, parking is not a problem and there are designated disable parking spaces in Luxembourg City. Nearly all taxis can take wheelchairs, but for specific needs contact the countrywide services of Novabus for occasional use. One-way fares are EUR 5, same-day returns are EUR 8, and they are available 7am to 10pm daily at +(352) 24652465.

Cycling in Luxembourg has brought out some of the best cyclists ever lived, some who have won Europe’s Tour de France at least four times. That being said, there is an abundant system of biking trails across the country, from road biking to mountain biking to simply getting around town. While bringing your bike on trains and buses are free, be prepared to carry your bikes on and off the public transport. And if buses are too full, there might not be enough room for your bike.

As long as there is room for dogs to be on board, then it is allowed to bring them on trains and buses for free.

The average European family on a road trip knows to fuel up in Luxembourg because prices are notoriously about 20 percent lower in Luxembourg than most countries in Central Europe. Rental cars aren’t too expensive either, starting at about EUR 40/day or EUR 200 a week, but parking in areas like Luxembourg City can get pricey. Roads are in good condition, with sparse traffic in the north and a near gridlock during rush hours to and from Luxembourg work districts. Speed limits are 50kmh in urban areas,90 kmh on country roads and 130kmh on highways. In winter, your car by law must have winter tires on during periods of snowfall, slush, ice or frost.

For those with a keen interest in Luxembourg’s trains, take a look at Train 1900.

A guide to getting around Luxembourg 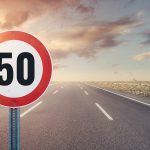