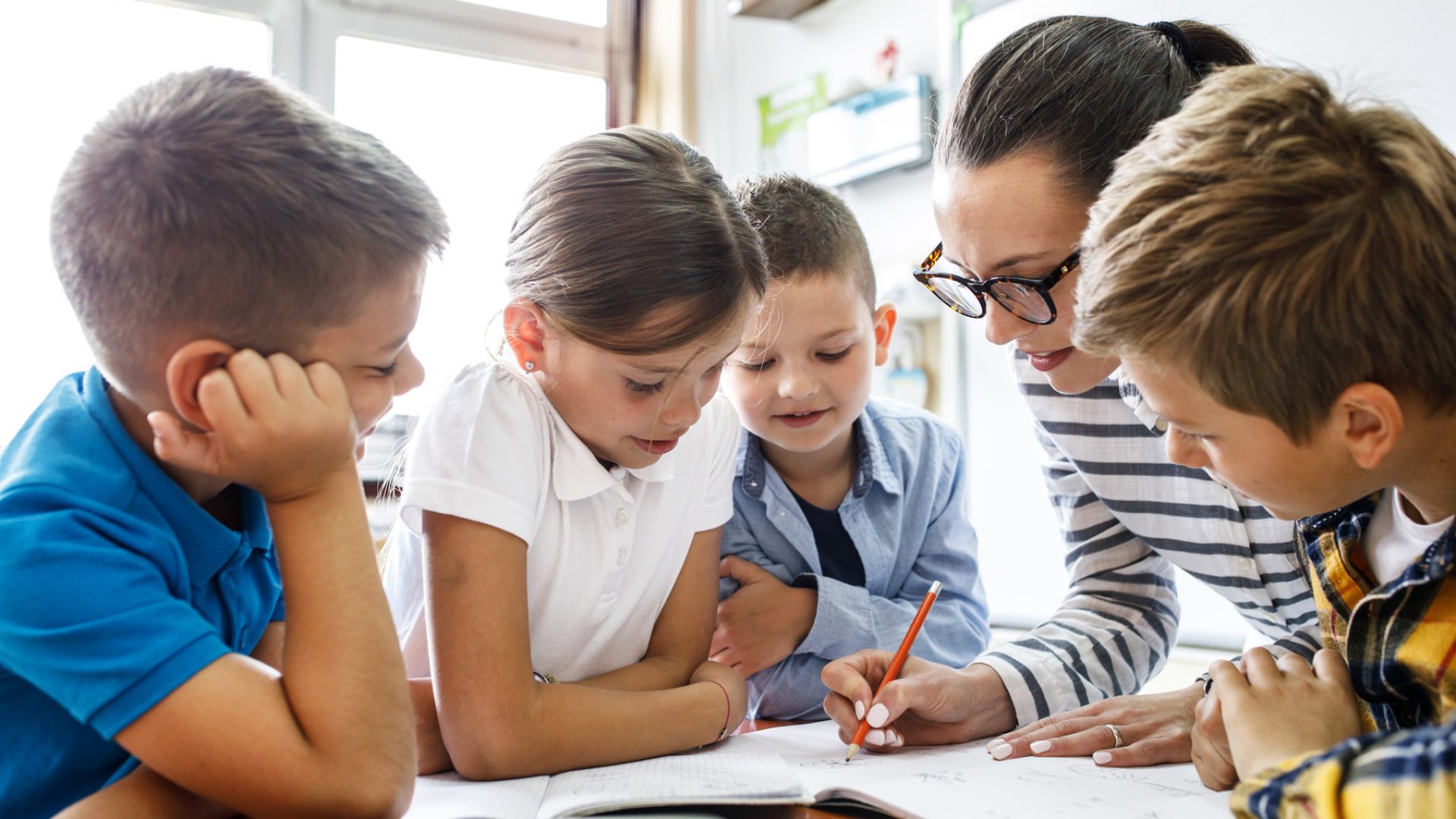 Learn how to navigate the education system in Spain while exploring the financial aid and support available to expat parents.

Understanding the schooling system in Spain can be a daunting task, especially if you face a language barrier. However, our helpful guide is here to walk you through each level of education in the country, from preschool up to university. Along the way, we will also explain the financial aid and support available to expat parents.

An overview of education in Spain

Schools in Spain are governed by the Ministry of Education and Vocational Training (Ministerio de Educación y Formación Profesional). However, they work more directly with the local autonomous communities (Comunidades Autónomas), which allocate funding, guide the curriculum, and oversee education standards.

In Spain, school is only compulsory between the ages of 6 and 16 (Educación Primaria and ESO). After that, students can choose whether to continue on to higher education, either at a university or a vocational school. Notably, in recent years, the Spanish authorities have been improving vocational courses in order to address the high unemployment rate in the country.

While preschool education (Educación Infantil) is not compulsory in Spain, almost all children complete it. Preschool education is split into two ‘cycles:’ a first cycle (primer ciclo) for children up to the age of 3, and a second cycle (segundo ciclo) for children aged 3 to 5. Primer ciclo is provided at nursery schools (guarderías), while segundo ciclo is taught at preschools (escuelas infantiles). The educational department of the local autonomous community is responsible for these schools.

Read more about childcare in Spain

Children as young as a few months old can attend guarderías in Spain. These function mainly as a low-cost childcare option. Families with a low income or other children might also be eligible for financial support for guardería enrollment. However, after the age of 3, public preschools do not charge for attendance. You can read more about this on our guides to childcare and daycare and preschools in Spain.

The primary school system in Spain

Educación Primaria is compulsory in Spain and begins at the age of 6 and continues until 12 years of age. The local authority (Comunidades Autónomas) is responsible for primary education in Spain and strives to ensure a free place for each child in a primary school in their local area.

During their time at school, children undergo formative and summative assessments in order to track their progress. Parents get regular updates, and at the end of the year, they receive a record showing their child’s results for each subject.

While public primary schools in Spain are free to attend, parents might still need to pay for books and other items their child requires. Schools have a lot of freedom as to how they teach the curriculum, so it is wise to research the results of the local schools that you are interested in.

All primary schools in Spain must provide core subjects including natural sciences, social sciences, Spanish literature and language, mathematics, and a first foreign language. At least 50% of teaching time is dedicated to these core subjects, leaving time to teach other subjects such as second languages; for example, Galicia, Catalonia, the Basque Country, or Valencia. While the different Comunidades Autónomas can offer advice, schools and teachers generally make their own decisions when it comes to teaching methods.

Parents can choose which school to enroll their child in, however, this is within limits. Children usually attend the school that is nearest to their home, but when schools are full, spare places are given following a points-based system. This considers any siblings that already attend the school, how close the school is to the child’s home or parents’ workplaces, the family’s income, and any disabilities the child may have.

Although most children in Spain attend a state school, about 32% study at a private or semi-private school. These schools charge fees, which vary significantly depending on the children’s ages and the type of private school.

The types of private schools in Spain include:

Some private schools in Spain also provide boarding facilities and special educational needs (SEN) support, making them attractive to certain families, depending on their circumstances.

There are also 258 International Schools in Spain, which is the fifth-largest number in the world. These schools are located in 27 different cities, with the majority being in Madrid (48) and Barcelona (43). International schools are popular among expat families with short postings in a new country, such as embassy staff and NGO workers.

Secondary education in Spain is split into two stages: Educación Secundaria Obligatoria (ESO) and Bachillerato or professional training. ESO is compulsory, whereas Bachillerato, or preparation for university, is not.

All children must attend school in Spain until the age of 16. Between the ages of 12 and 16, most students attend a secondary school called an Instituto. The four compulsory secondary years (cursos) are divided into two stages (ciclos): 1st to 3rd curso and 4th curso. In the first ciclo, students can repeat two years, but they can only repeat the 4th year if they have not repeated any of the other years.

At the end of the compulsory stage, students receive a certificate to confirm that they have passed compulsory lower secondary education (Título de Graduado en Educación Secundaria Obligatoria). However, if they don’t pass their subjects, they receive a report showing how long they have studied and their results for each subject.

The Bachillerato is a two-year course that prepares students for university exams. Students must take compulsory core subjects combined with four more subjects of their choice. If a student opts for vocational education, they must study the same core subjects as well as applied and business-related subjects.

At public secondary schools, students study core subjects – including mathematics, science, Spanish, and a first foreign language – as well as several other specific and optional subjects. These include business, culture, music, religion or ethics, physical education, and a second foreign language. In areas of Spain that have a co-official language – such as Catalonia, Galicia, Valencia, and the Basque Country – schools might also teach in that language or offer it as an extra subject.

The Ministry of Education and Vocational Training (MEFP) sets the base curriculum in Spain, and regional educational authorities complete it. Each school can then adapt it to meet their students’ needs, and teachers can decide how they teach it.

In addition to having purely private schools, Spain is also home to a variety of other schools, including the following:

The International Baccalaureate (IB) in Spain

The International Baccalaureate (IB) has become more common in Spain in recent years. While it is mostly taught in private and international schools, more and more state and state-subsidized private schools have begun teaching it. Nowadays, the IB is treated the same as Spanish high school certificates when applying for university. It is also recognized worldwide. You can read more about this in our Guide to international schools in Spain.

When students in Spain finish compulsory education, they receive the Título de Graduado en Educación Secundaria Obligatoria (GESO). As long as they pass mathematics and Spanish (or the co-official language), they can then graduate with all but two of their chosen subjects. Afterward, they may choose to study either the Bachillerato or vocational training.

Once students have their Bachillerato, they take Spanish University Admission Tests (Evaluación de Acceso a la Universidad – EvAU/EBAU). These exams, which are also known as Selectividad, are set by Spanish public universities and are based on Bachillerato subjects.

Spain’s Ministry of Education offers a range of financial aid for families with children under the age of 18. This can come in the form of direct finance, grants for travel and school supplies, or tax relief.

For instance, families earning under €12,313 per year can receive €341 per child per year. There are also birth and adoption benefits for large families or multiple births. Financial support is also available for single-parent families and parents with chronic illnesses.

Other direct financial help is available for families with children with a disability, and this is assessed according to the degree of disability. There is also funding for specific costs such as fees, transport, and meals. These can be covered for children with disabilities, behavioral disorders, and autism. To apply, children must be over two years old and have a certificate that states that they need support. This is available from a Center for Special Needs (Centro de Valoración y Orientación de Discapacitados).

Educational support for expats in Spain

In recent years, Spain has increased support for children who are learning Spanish as a second language. As well as providing extra help in the classroom, schools might also teach lessons in Spanish or the local language in a separate language classroom (Aula Temporal de Adapción Lingüística – ATAL). Some schools also support and encourage children to learn their native language outside of school hours.

There are also several organizations and programs that help to promote bilingual education in Spain, as follows:

As well as these programs, Spain has several groups that support language learning for expats. For example, the Instituto Cervantes promotes Spanish learning worldwide and teaches people of all ages.

Support for children with special educational needs (SEN) in Spain

In Spain, schools encourage all children to attend mainstream schools. However, help is at hand for those with special educational needs (SEN); known as Necesidades Educativas Especiales (NEE) in Spanish. For instance, children can receive grants to pay for extra support. To obtain this, they must be assessed by a local Centro de Valoración de Discapacitados.

If students need to attend a separate school, their progress might also be monitored to see if they can return to the mainstream system. Schools also support students’ mental health by providing counseling to improve self-esteem and thinking skills. If a pupil requires therapy, then staff will refer them to an outside specialist.

If you move to a new city or find that a school does not suit your child, then you might think about changing schools. While children can change schools in Spain, most parents wait until the end of the school term or year before moving their child.

The process for changing school is similar to that of enrolling. However, you might need to prove a change of address or show a report from the school. You should contact the educational department of your local autonomous community to find out which documents you will need.

Chances for parental involvement in schooling in Spain

One of the best ways for parents to engage with their child’s education is to join a Parent Teacher Association (Asociación de Madres y Padres de Alumnos). Known informally as AMPAS, these groups help schools with decisions and activities. For example, they might help request funds, plan activities, give feedback, or even organize transport. Notably, their duties vary from community to community.

The board of governors (Junta Directiva) manages the AMPAS. If you are keen to take the lead in your school’s activities, there are several posts to run for. The school sets up Junta Directiva elections and plans the general assembly to agree on budgets.

While homeschooling in Spain is permitted, it is far from simple. The law states that all children must be in school between the ages of 6 and 16. In fact, parents whose children do not attend school can face fines from the Ministry for Education. Homeschooling can also be a contentious subject in Spain. That said, determined parents can seek more information from the Association for Free Education (Asociación por la libre educación – ALE).