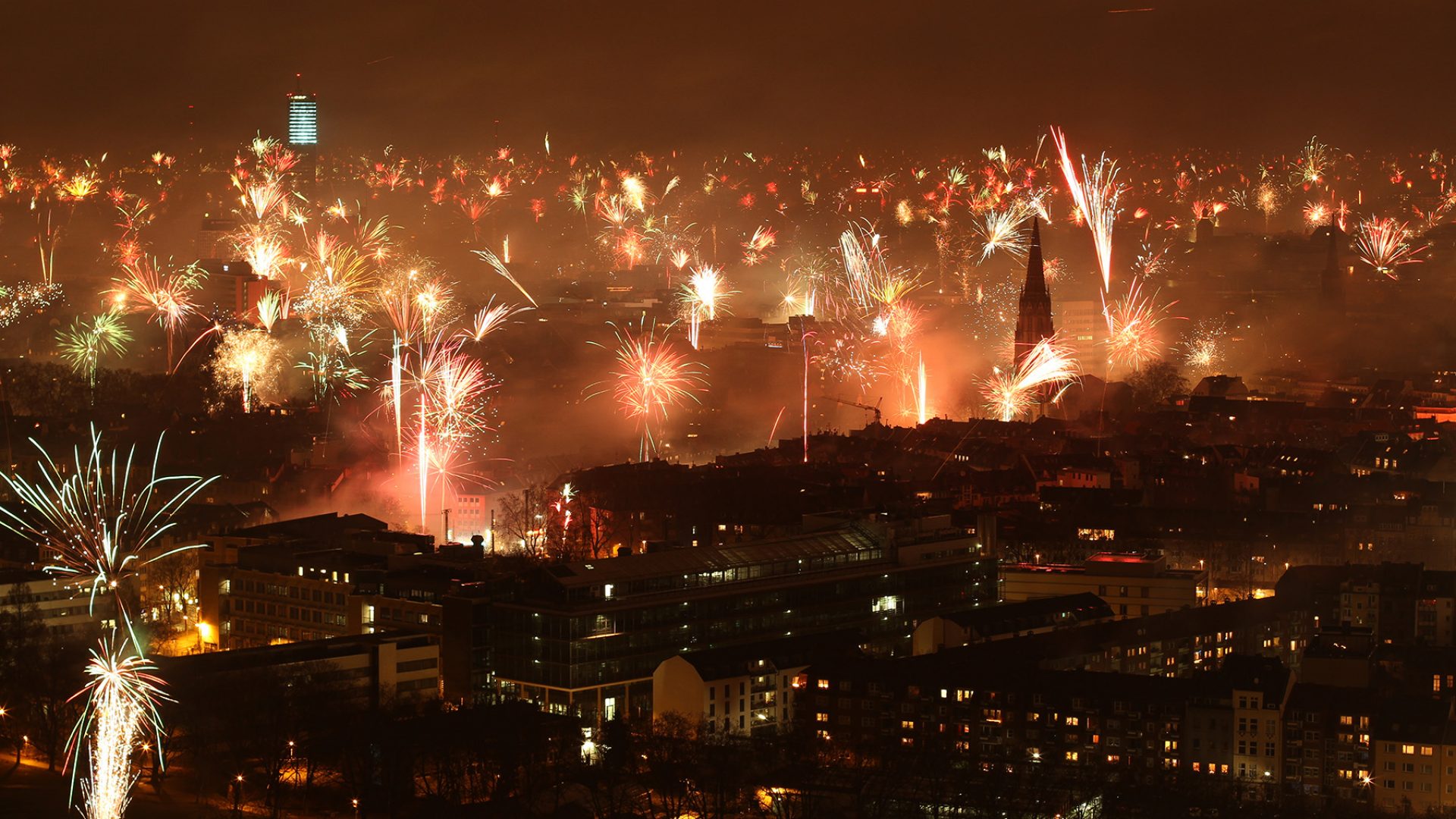 New Year’s Eve in Germany brings parties, raclette, glühwein, and plenty of fireworks. Here’s what you can expect from a German New Year’s celebration.

On New Year’s Eve in Germany, public transport operates more or less as usual. Revelers can reach the major city squares or travel to their favorite venues snugly in a warm metro coach. Carrying alcohol is possible. For those who prefer to leave home empty-handed, you’ll find stalls at most street corners selling beer and mulled wine.

Although Germany celebrates Silvester with fireworks, parties, and street spectacles, there are some popular national traditions. One of these is Bleigießen; fortune-telling through reading the shapes made by molten lead dropped into cold water. The custom of drinking warm glühwein is the best way to warm up on an icy winter’s day or night.

Berlin probably hosts the biggest New Year’s blast in the country. Their celebrations attract millions of visitors annually, both national and international. People gather in the biggest squares such as Alexanderplatz, in front of the Reichstag, or around the Brandenburg Gate. Brandenburg is the focal point of Berlin’s New Year’s Eve celebrations.

These famous spots can be so crowded that police need to intervene through blocking passages and regulating pedestrian traffic. In 2009, those who decided to head for the Brandenburger Tor after 10.30pm found full streets and police barriers. For those who like to celebrate the midnight chime in the open, move there early in the evening.

If milling with the crowds doesn’t appeal, then find a private party. Private parties on Silvester are popular, with people only filtering out onto the streets to mark midnight and then heading back indoors or out for a night of clubbing. Due to the metro running late into the night, last-minute decisions on whether to stay in or go out can be done without too much stress.

During Silvester many Germans cook up raclette, which is a traditional dish based on the cheese of this name accompanied by potatoes and cucumber – or vegetables and meat to taste. A modern electric raclette grill with small pans is the most common way to serve it.

One slightly unusual New Year tradition in Germany is the viewing of a short comedy film, Dinner for One. The film depicts an elderly, well-to-do, British woman who has invited her friends to her birthday dinner. Unfortunately, her friends are no longer ‘with us,’ so her butler steps in, making toasts on behalf of them, becoming steadily more intoxicated.

In Germany, more than half of the population watch this film on New Year’s Eve. Although it features a British woman and originated from a sketch in the UK, it is almost unheard of in the country. It was first screened on TV there in 2018.

Around the world, rounds of fireworks sparkle and crackle into the sky at the witching hour, yet here in Germany, and especially in Berlin, it seems to be an obsession. From windows, terraces, balconies and roofs, with typical German resolve and accuracy, families feel compelled to shoot off their round of crackers and bangers. This home ‘concert’ doesn’t stop till the major ‘orchestra’ playing in the streets and in the squares begins to fade out.