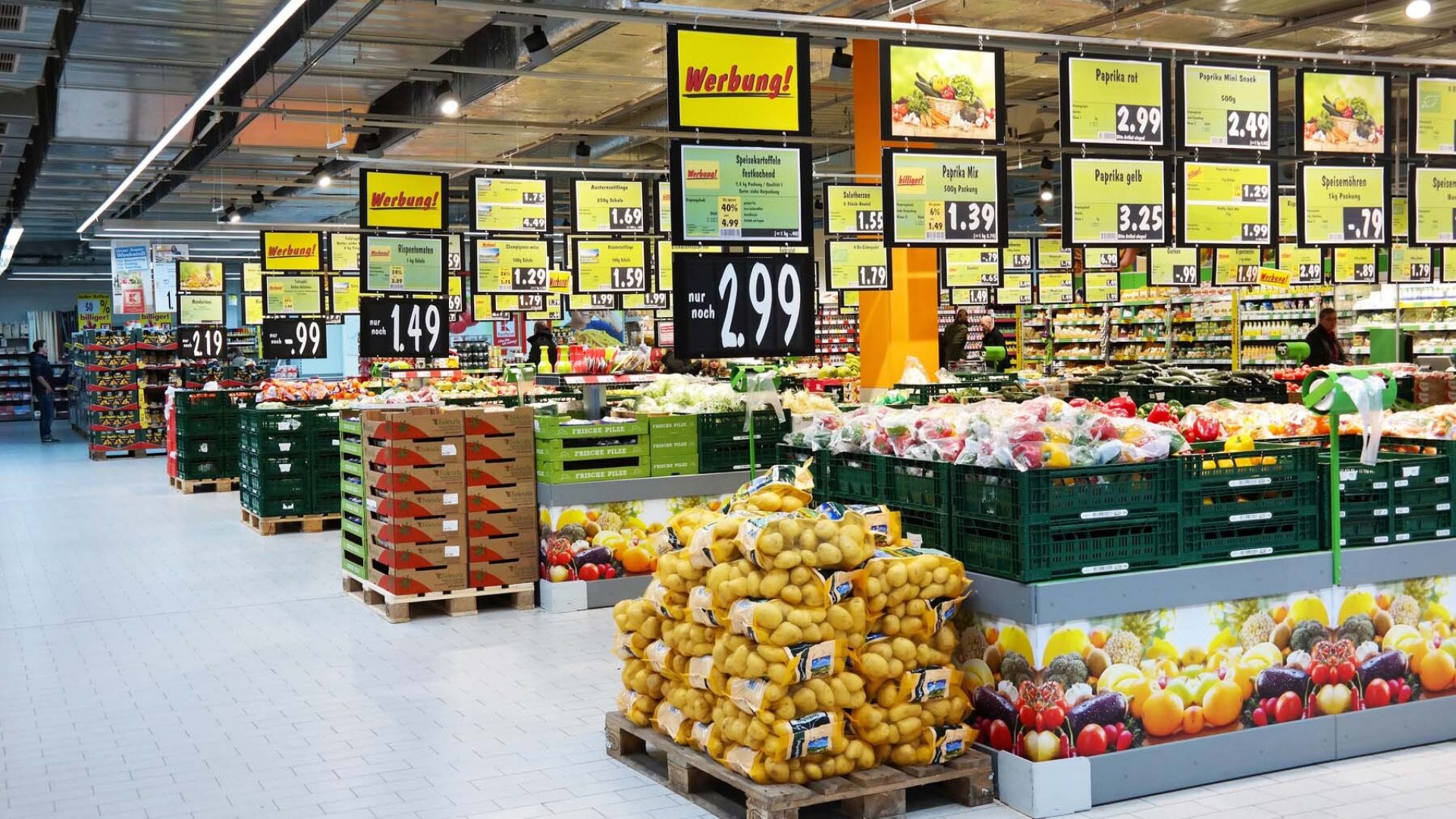 Get ready to explore your local grocery stores and supermarkets in Germany with our guide. What’s the wurst that could happen?

One of the best parts about expat life that you won’t read in any guide book is just how adventurous grocery shopping becomes in your new home. Faced with aisles of weird and wonderful products you’ve never tried before, a trip to the local supermarket can quickly become a casual adventure into an unknown culinary world. Food shopping definitely isn’t a chore when you’re an expat.

If you’re new in Germany, you’ll soon find most local grocery stores are well-stocked with an impressive range of foreign and domestic goods. But before you get ready to explore those supermarket aisles, this helpful guide has everything you need to know about grocery shopping in Germany. It includes information on:

When you arrive in Germany, the local supermarket will likely be one of the first places you visit in your new home. It probably won’t feel like the grocery stores you’re used to, but don’t let that put you off. Step inside and you’ll find a whole world of tastes and flavors that you may not have even heard of before, let alone tried.

Supermarkets not your thing? There are plenty of other options for getting food in Germany. These include shopping at local specialty stores, perusing your nearest fresh food market, or using online services that deliver groceries straight to your door. If you don’t like cooking, you’ll find a range of restaurants, cafés and snack bars across Germany, as well as plenty of takeaway options.

If you like your supermarkets, you in for a treat in Germany. Every town, village, and neighbor will have at least one grocery store. Many will often have two: a regular supermarket and a discounter. In the larger cities, you’ll find stores for every taste and budget. Supermarkets in city center locations tend to be on the small side, but you’ll be surprised at just how much they cram into the aisles.

For many expats, the best thing about grocery shopping in Germany is the prices. German supermarkets are typically cheaper than neighboring countries. This is why many residents from Belgium, Denmark, Switzerland, and the Netherlands cross the border for their weekly groceries. However, like in most European countries, the range of choice in Germany may not be what you’re used to. This is particularly true if arriving from the United States. But once you’ve acclimatized, you’ll soon find everything you need.

German grocery stores offer a decent range of products, with good selections of produce, meat, diary, and vegetarian foods. Many also have in-store bakeries – usually a popular spot for expats. You’ll be amazed at just how many types of bread, cakes, and pastries your neighborhood grocery store has. You’ll also find many in-store offers, helping you make your money go further.

As one of the largest countries in Europe, Germany has plenty of supermarket chains to choose from. Many are found nationwide, however there are still significant regional variations when it comes to grocery stores. Some of the largest chains you’ll find in Germany include:

As Germany is a big country, you’ll find plenty of other supermarket chains we haven’t included on this list. Many of these operate regionally. However, you’ll still find the same wide range of products in-store, so don’t be afraid to dive straight in.

Get your home connected with our guide to German utilities

Germans love their discount supermarkets – which is probably why they’ve decided to share them with the rest of Europe. Stores are generally well-stocked with a decent range of products. Don’t expect to be blown away choice, but the products are of good quality. Most locals shop at these discount stores regularly, so leave any prejudices at home and enjoy your shopping.

As the locals love their discounters, expect to find many other low-cost, low-frills retailers in Germany. These include Penny Markt, Norma, and many other regional players.

Are you looking for something a little more niche from your weekly grocery shop? Germany has a full hamper of other supermarkets to choose from if you can’t find what you’re looking for in the aisles of Aldi or Edeka. These range from organic food supermarkets to health food specialists.

Read our guide to opening a bank account in Germany

If you’re living in Germany, you’ll want to know just when you can explore all these great supermarkets. Generally speaking, German grocery store opening hours are some of the most restrictive in Europe. Supermarkets are typically open from 07:00–20:00, although you can expect slightly later closing times in larger towns and cities. However, this is not the norm in smaller towns, so don’t be surprised to find your local hypermarket shutting up shop at 20:00.

Sunday opening hours are often another expat annoyance, with many stores closed the whole day. Therefore, it pays to plan your grocery needs ahead of time so you’re not caught out. In larger cities, you’ll find a handful of smaller convenience stores open on Sunday. These are usually located in train stations and sell a limited – and often significantly marked-up – range.

Things you need to know about German supermarkets

If you’re an expat living in Germany, there may be a few things you don’t realise about supermarket shopping in your new home. To give you an idea of what to expect, here are a few pointers:

If you’re unable to visit your local supermarket, or simply prefer the convenience of having your groceries delivered, then you’re in luck. While supermarket delivery may not be as widespread as in other countries, it is increasingly popular across Germany. There are even online-only supermarkets, including:

Availability depends on where you live, and is often not available from discounter chains. However, the process is easy. Simply shop online and choose your delivery slot.

If cooking at home sounds a little too much like hard work, don’t worry. You’ll find a whole host of excellent cafes and restaurants throughout Germany, catering to every taste. Don’t feel like venturing out? Germany also has plenty of food delivery platforms that can connect you with your favorite local takeaways and restaurants. These include:

Germany has one of the most ethnically-diverse populations in Europe. Since the 1960s, the country has attracted a number of immigrants hailing predominantly from southern Europe. Significant immigrant communities in many of Germany’s larger towns and cities have seen a steady rise in the number of ethnic grocery stores serving these and other communities.

While German supermarkets aren’t known for their high prices, these ethnic supermarkets can still provide a wider range of products for cheaper prices. This is particularly true if you’re looking for international foods, although the ranges of everyday goods typically vary significantly in terms of quality and price. If you have a local ethnic supermarket, check it out as you may be surprised by just how much you can find inside.

For many expats arriving in Europe, their grocery shopping dreams don’t revolve around supermarket aisles but perusing the stalls of their local food market. Thankfully, if this is what you’re looking for in Germany, you’re in luck. Just do a little research ahead of time to find the trading times at your local market and grab your tote bag so you can stock up on goods!

While you won’t be able to find everything you need, some German food markets offer a surprisingly broad range of goods. This is particularly true in larger towns and cities. Regardless of size, most markets have stalls selling fresh fruit and vegetables, meat, dairy, and baked goods. Others will have more niche offerings. You’ll also be able to find plenty of tasty treats to try while you buy, and many markets have food trucks selling hot meals and snacks.

It’s safe to say the Germans know a thing or two when it comes to getting great-tasting food and drink. While the supermarkets and grocery stores offer good quality food, if you’re looking for something a little more special, you might want to check out your local specialty stores. These are entire shops dedicated to a handful of products, such as butchers and bakeries, and Germany has lots of them.

As you might expect from a country known for its baked goods, there are plenty of bakeries to explore with your tastebuds. You’ll also find butchers and delicatessens for all your fresh meat and cold cuts, as well as the occasional lovingly-made sandwich that might take you by surprise. In coastal cities, you’ll likely find fishmongers selling the latest catch. You also won’t want to miss out on the local chocolate shops – especially around the holidays.

Sometimes you need to grab a quick bite to eat, and in Germany, you can do this at the country’s growing network of convenience stores. Traditionally, these neighborhood stores are called Kiosk or Spätkauf. They sell a mix of items, from newspapers and magazines to beer and Haribo. Depending on the weather, you may well see a group of locals collecting outside for a beer or a smoke.

If you prefer your local stores a little more modern, the big names in German supermarkets have been moving into the convenience sector. You’ll likely come across these at train stations, gas stations, and in city center locations. These stores offer a limited range of goods and are typically more expensive than you might expect from these chains. However, many will also sell fresh foods, including sandwiches, salads, and coffees should you need a quick bite to eat.

For most of your alcohol needs, you’ll be able to stick to your local supermarket. These stores offer great discounts on beers and wines, and many of the supermarket’s own-brands are just as good as the global names you might be used to. You’ll also be able to find beer at your local convenience kiosk. However, for a dedicated drink store, you’ll need to head to a Getränkemarkt. Here, you’ll find all sorts of beverages – both alcoholic and non-alcoholic – to meet your needs.

There are also a growing number of online stockists of your favorite German beers, as well as wines and spirits from Europe and beyond. Some of the most popular online stores in Germany include:

These online stores can be a great option if you don’t want to venture out into the harsh German winter or if you’re planning a party, as they deliver directly to your door.

Missing all your favorite foods from home? Germany is fairly multi-cultural, which means you should be able to find all those much-missed products from around the world. If you’re in the market for North American goods, you’re more likely to come across German attempts at US-style products than the actual thing. However, in larger cities with a dedicated expat population, such as Berlin, Frankfurt, and Munich, you may be able to find what you’re looking for with a little research. Alternatively, you can search online for delivery services, such as British Corner Shop, which specializes in goods from the UK.