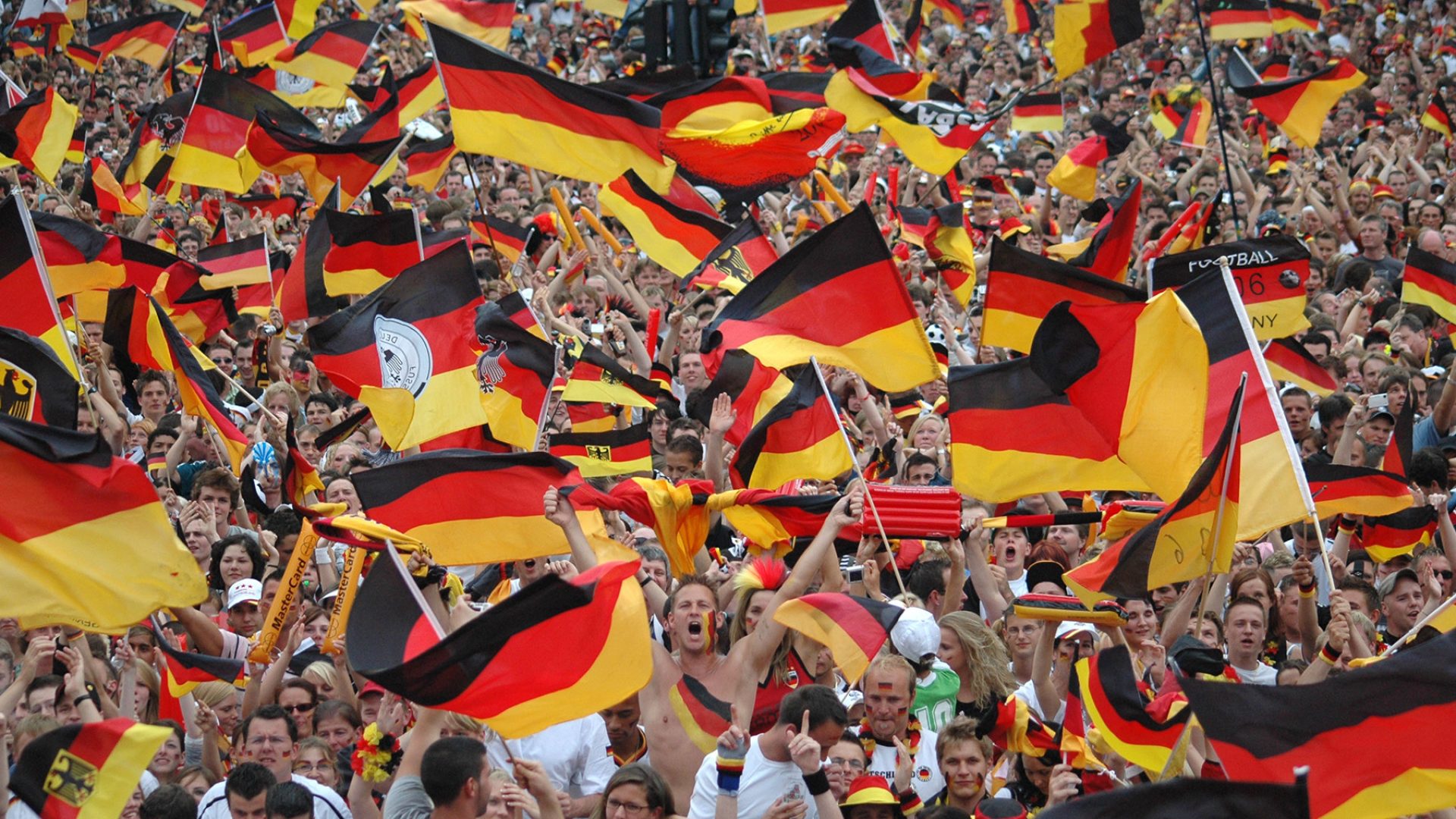 Get to know your German neighbors in a whole different light with our guide to the most popular sports in Germany.

If you’ve just arrived in Germany, then discovering what sports the locals are into can really help you better understand the country’s culture. And whether you’re thinking about getting your kit on, or simply watching the pros from your sofa, sporting powerhouse Germany has plenty of options to explore. Luckily, our guide to the most popular sports in Germany will help you figure out whether you’ll be watching balls, bikes, or brake lights.

Want to catch up on your favorite sports from around the world? Telekom can help. Alongside their mobile and internet services, Telekom also offer comprehensive German TV packages that can be tailored to every taste. Whether you're a fan of Formula 1, football, or some fast and furious handball action, you'll find the right coverage with Telekom.

The majestic country of Germany has long been an international sporting powerhouse. Indeed, the country has a rich and decorated history when it comes to sports, hosting the Summer Olympics twice (in 1936 and 1972, respectively), and the Winter Olympics once (also in 1936). The country has also welcomed football’s FIFA World Cup twice, in 1974 and 2006.

However, away from these global events, Germans love their sports. As a result, you’ll find plenty of ways to get active – or, at least, catch it from the comfort of your own home.

How to watch German sports on TV

Whether you’re a fanatic or an occasional armchair follower, you’ll find plenty of ways to watch your favorite German sports. As well as buying tickets to see the match or race live, you can also watch sports from Germany, Europe, and beyond at home. Many of the biggest home telecom companies in Germany offer sports channels as part of their TV and home internet packages. These providers include:

There are also other subscription services and streaming platforms available in Germany that offer live sports channels. These include:

When signing up for any TV package in Germany, it’s important that you understand exactly what you are getting. This is especially true if you are looking for coverage of a certain sport (such as Formula 1 or American football) or a particular competition, like the English Premier League or the Indian Premier League. For more information, make sure to read our guide to German TV and radio.

As you might expect, the most popular German team sport is undoubtedly football (Fußball). The game is played by men and women of all ages and abilities across the country. Indeed, at the grassroots level, you’ll likely find plenty of opportunities in your area if you want to get involved; including some expat-run teams in the bigger cities. However, for many, football in Germany means tuning into the Bundesliga, the top men’s professional league in the country.

The Bundesliga consists of 18 teams from across the country, with matches typically played on weekend afternoons and weekday evenings. Compared to other European leagues, tickets for Bundesliga games are fairly affordable, although availability differs between teams. The most successful team in Bundesliga history is Bayern Munich, followed by Borussia Dortmund and Borussia Mönchengladbach. The top teams in the Bundesliga go on to play in the European Champions League. In the women’s game, the Frauen-Bundesliga is the top level of the sport.

For a truly German footballing experience, try to get tickets for the German men’s national team, known locally as Die Mannschaft. The team plays at various stadiums across Germany, making it easier for fans to buy tickets. The German men’s national team is one of the most successful teams in world football, winning four World Cups (1954, 1974, 1990, and 2014) and three European Championships (1972, 1980, and 1996), respectively. The country is also set to host the next edition of the European Championships, which is scheduled for 2024.

If you prefer your balls handled instead of kicked, then you’ll probably be interested in what many call Germany’s second-favorite sport, handball (Handball). Like football, handball is an easy sport to get into. It’s played by men and women of all ages and abilities, so you should easily be able to find a local team. Many teams also offer taster sessions for those who don’t know this fast-paced sport or haven’t played it for a while. This can be a great way to get active while making friends in your new home.

If you want to see how the professionals play, then check out either the men’s or women’s Handball Bundesliga. The men’s league consists of 18 teams from around the country, with the most successful team being THW Kiel. Meanwhile, the women’s league has only 14 teams, and Bayer Leverkusen and Thüringer HC are the most successful clubs. Leagues are played during the winter months, and despite the sport’s popularity, tickets remain affordable. That said, you may need to book in advance to watch the bigger teams play.

Given that Germany is home to some of the biggest car manufacturers in the world, it should come as no surprise that it is one of the best places to catch full-throttle international motorsport. The country has also given us some of Formula 1‘s biggest names over the years. From the great Michael Schumacher to more recent champions like Sebastian Vettel and Nico Rosberg, the Germans can certainly drive. Germany last hosted a Formula 1 race in 2020, at the famous Nürburgring. And while there are currently no plans for future German races, this could easily change due to the local popularity of the sport.

Thankfully, there are plenty of other ways to get your motorsport fix in Germany, including the German MotoGP, Rallye Deutschland, and the Nürburgring 24 hours. And if you’re in Berlin and want to see some wheel-to-wheel action on your doorstep, the city hosts a Formula E race every year at its iconic Templehof Airfield. Here, you’ll be able to get up close and personal with some of the fastest electric cars in the world.

If you’re a recent arrival from North America, then you’ll be happy to know just how popular ice hockey (Eishockey) is when it comes to German sports. Like many of its central European neighbors, Germany has a rich history on the ice. If you or your kids fancy getting your skates on, then be sure to search on Google for your nearest club as leagues and competitions are available for all age groups, depending on your location.

At the upper echelons of the sport, you’ll find the men’s Deutsche Eishockey Liga and the women’s Deutsche Fraueneishockey-Liga. The men’s league is the second most-supported ice hockey league in Europe, after neighboring Switzerland. On the international scene, the German men’s team won silver at the 2018 Winter Olympics in South Korea, their first medal since 1976. Indeed, while it might not attract the same crowds as football, numbers typically rival those of handball and the fans can get rowdy. For big matches, make sure to book your tickets early to avoid disappointment.

Anyone for tennis? Thanks to a number of impressive German champions over the years, Germans certainly love-all things tennis. The legendary names of Steffi Graf and Boris Becker have been joined in recent years by three-time Grand Slam winner Angelique Kerber, and 2020 Olympic champion Sascha Zverev. But even if you’re not quite Grand Slam level, you’ll still find a host of tennis clubs across Germany. Courts are typically hard or clay, with plenty of indoor ones for those harsh German winters.

If you simply feel like taking in some tennis in Germany, then you also have options as the country is home to a number of tournaments throughout the year. These include the Halle Open (on grass), Hamburg’s German Open (clay), and the WTA’s Stuttgart Open (also clay). However, be sure to book tickets ahead of time as these courts can fill up fast, particularly when local favorites are scheduled to play.

As you might expect from a country with so many Alpine peaks, winter sports are a big deal in Germany. Besides ice hockey, there are loads of wintry activities to keep you and your family occupied. Some of the most popular ones include ski-jumping, biathlon, and downhill skiing. But if shooting or throwing yourself down a mountain doesn’t sound too appealing, there are other more sedate activities you can turn to.

If you’re visiting one of Germany’s alpine resorts with the family, then why not head out on a cross-country ski route? This is a great activity for the whole family and a perfect chance to see the mountains at a more leisurely pace. Meanwhile, figure skating and curling are both popular indoor sports in Germany, particularly in the more mountainous areas to the south. These are suitable for all ages and are perfect for those who love being on the ice. Many of these great winter sports also appear regularly on German TV.