Choosing an international or private school in South Africa

Most expats send their children to international school in South Africa (there are four in Johannesburg alone), however, there is also a large number of excellent South African private schools – single sex, co-ed, or boarding – that you should take into consideration (see school listings below). If your company does not cover school fees or only offers a fixed budget for schooling, a private school will be much more affordable than an international one.

How to find the right school for your child

Many factors will play a role in your decision. Below is an overview of the main factors you should consider, highlighting some differences between the international and private schools.

Many expats get school fees reimbursed by their companies so this may not be your number one concern, but you still need to find out what is covered (like uniforms, extracurricular courses, bus service etc.). A cost comparison is not included here, as fee structures can be confusing and vary greatly, but in general private schools are substantially cheaper than the international schools, as they do not have to finance expat teachers.

More than anywhere else, this should be your number one concern, to be researched diligently (together with your place to live).  Johannesburg traffic is very bad, everywhere, and particularly during rush hour, so a school within walking distance is ideal, followed by one that offers bus service.

Depending on where you’re coming from, your kids may have a shorter or longer school day than you’re used to. Private schools typically go from 7:30 to 2:00, with optional sports and after-school activities from 2:00 to 4:00, while the international schools typically reflect what’s customary in the respective school’s home country.

The South African school year begins in mid-January and ends in early December, with two 3-or-so-week breaks in April and August and a number of holidays in between. Therefore, the disadvantage of attending a private school is that your kids will likely go back a half a grade because most local schools insist on pairing kids with their age group. The international schools, however, follow the traditional August-June school year (with the exception of British International College), so if losing that half-year is a concern to you, you are better off with an international school. However, that brings another challenge: International schools also follow the home country’s holidays, so your work calendar might not be aligned with your kids’, making travel planning more difficult.

This is the hardest factor to evaluate. You won’t really know how academically sound a school is until your kids have actually gone there. It’s the area where talking to other expats in similar situations is of the most value. It is fair to say, however, that South African private schools lag behind the United States and England academically, particularly in mathematics and early reading. If you think your children are best served by continuing their existing curriculum, and if you have grounds to worry that making up lost instruction upon your return to your home country will be too difficult for them, an international school will offer more security (if you come from a country whose curriculum the international school represents). However, academics are only one part of a school’s performance, and most private schools do an excellent job in the area of life skills, discipline, sports, and providing a balanced education. When researching schools, find out if they participate and how they score in national and international examinations. You can also look at teacher turnover and enrolment trends.

If this is a concern to you, contact the school directly to find out what, specifically, is offered. Private schools tend to be less flexible in general than some of the international schools and might be less accommodating, but it will also depend on your child’s particular circumstances. Search the ISASA website for a listing of special needs schools.

Your kids (and you!) will make new friends no matter what school you choose, but your mix of friends will be different. Count on meeting many more expats at an international school, and more South Africans at a private school. Expat friends are wonderful, because you have so much in common, but they also tend to move more often. Local friends will offer a better glimpse into the soul of your new country. Most likely you will live in an area such as Dainfern or Kyalami with big populations of expats as well as South Africans, allowing you to meet both.

If your children are invested in specific sports and want to continue them in South Africa, it is important that you check what the school offers. Again, traffic in Johannesburg is unpleasant at best, so that even if a sport is available at a club, it may not be convenient for you to drive there several times a week. All schools offer extramural sports. If you’re looking for cricket and rugby, a private school will be perfect, but if you’re looking for basketball, the American school is better. Swimming and tennis tend to be big sports at both international and private schools. Also, check what music offerings are available through the school – some private schools bring in outside tutors to teach instruments during school hours.

Moving to a new country and attending a new school in itself is a huge accomplishment in terms of life skills. No matter which school you choose, your children will learn tremendously from this experience. But there are certain things you can check: does a school have outreach programs? Entrepreneur days? Job shadowing? Elective subjects/extramurals? Is there an integrated approach to learning, versus mere rote learning such as multiple choice tests? What kind of vision does the school have over the next ten years? Do academics, sports, and music seem to be balanced?

One additional note for prospective expats: Make sure you investigate school options early and apply for a space for your child so that you can be placed on a waitlist in case availability should be limited. Visit www.isasa.org or www.studysa.co.za for more information on South African education.

In addition to the opposite school year, as described above, there are some other differences to bear in mind when considering a private school. The term “preparatory” or “prep” school refers to grades naught (like Kindergarten) through seven (often divided into Junior Prep from grades 0-3 and Senior Prep from grades 4-7), whereas the word “college” is sometimes used for just the high school (grades 8-12) or both prep and high school combined. So make sure you find out which grades are actually offered. Most private schools have religious origins but are nondenominational, and are registered with the Independent Schools Association of Southern Africa (ISASA). Grade 12 students write the Independent Examinations Board (IEB) Matric Examination, which is recognized by most universities worldwide. The school year is most often divided into three terms, but sometimes into two semesters, so when comparing school fees, make sure you understand whether they are stated per term, semester, or year.

While the following list is not exhaustive, it includes a number of private schools in the Northern suburbs of Johannesburg, where most expats live.

When it became clear that her family of six would have to relocate to Johannesburg, South Africa in 2010, Sine immediately knew that she would have to start a blog about their trials and tribulations. Read her often-humorous, always informative observations on life as an expat in South Africa at joburgexpat.blogspot.com. 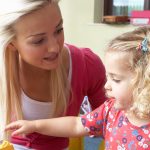 Finding an au pair in South Africa and other childcare options