What better way to explore Spain than with your tastebuds? From tantalizing tapas to fabulous fabada, here are the top 10 Spanish foods to try, with recipes.

If you’ve ever been to Spain, you’ll know just how important food is to the county’s rich and varied culture. Over the centuries, Spanish cuisine has developed into a wide range of delicious dishes based on fresh and colorful ingredients from all corners of the country. Many people will be introduced to the wonders of Spanish food through a tapas bar, often marveling at the choice and flavors on offer. But Spanish cooking is a whole lot more than delicious tapas. From hearty stews to light bites, there is something to satisfy every palate in this vibrant country.

To help bring a little Spanish excitement into your kitchen, here are the top 10 Spanish foods, along with recipes to try at home. ¡Qué aproveche!

Do you know your pisto from your paella? Take your Spanish cooking further with the language-learning app Babbel. Its range of professionally-made Spanish language courses will get you reading Spanish recipes before you can say patatas bravas! Download Babbel today and get stuck in.

We start our list with the ultimate tapas bar classic – croquetas. Many countries do their own version of croquettes, but the Spanish have them down to a fine art. The best ones combine some unforgettable Iberian flavors, whether jamón (cured ham), morcilla (blood sausage) or bacalao (fresh cod) blended with béchamel sauce. These are then breaded and fried and served up with a sauce of your choice. If you don’t fancy cooking, most local bars will serve their own variety, with the best usually found in the scrubbed-down neighborhood haunts where you are least expecting it.

Another tapas bar favorite is tortilla Española – or Spanish omelette as it’s known around the world. However, it’s not just a tapas treat. Tortilla can also be eaten as a main dish, a break time snack, or even in a sandwich, which is popular with kids. To create your own tortilla, you’ll need to slowly fry up onions and potatoes in olive oil before adding the egg. This will caramelize the onions and give your omelette that extra sweetness. If you’re feeling adventurous, though, why not try adding chorizo and spinach? But be warned, as delicious as this new combination is, the locals won’t let you call it a tortilla!

What better way to cool down during a hot Spanish summer than with a cool bowl of gazpacho? Usually served as an appetizer, this chilled tomato soup definitely packs a punch. To make it, simply blend up some fresh tomatoes, peppers, cucumbers, garlic, and herbs, and serve it with toasted bread for a low-calorie dish crammed full of vitamins. The idea of eating cold tomato soup might sound a little odd to some foreigners, but once you’ve enjoyed a traditionally made gazpacho on a hot summer’s day you’ll be hooked! For a twist, add some bread to create the Andalusian favorite, salmorejo.

Think ratatouille is something you’d only ever get served in a French restaurant? Think again. Okay, so it’s not technically ratatouille, but pisto is often called the Spanish version of the classic French dish. The recipe sees tomatoes, peppers, zucchini, onions, and garlic sliced up and roasted with a lot of olive oil to give it that classic Mediterranean flavor. Hailing from the plains of the La Mancha region, pisto can be a side dish, appetizer, or even a main course. Serve it with some fresh salad, bread, and of course, some local red wine for the ultimate Spanish experience.

Octopus is a big deal in Spanish cuisine, whether it’s deep-fried and served as tapas or transformed into something a little more sophisticated. One of the more elaborate dishes is the popular pulpo a la gallega, which sees paprika, rock salt, and olive oil combined to bring out the very best flavors from the octopus. This is usually served on sliced potatoes for a light yet warming meal. The dish hails from the north-western region of Galicia, which is definitely something to note for seafood-lovers. After all, the region is well-known around Spain for it’s unique, seafood-heavy cuisine.

You might not picture winter warmers when you think about Spanish food. However, it can get pretty cold on the Iberian peninsular and when it does, the locals love to tuck into a hearty fabada. This popular bean stew is perfect when the temperatures drop and definitely packs a punch when it comes to flavor. You can throw all sorts of spicy meats into your stew, including chorizo, morcilla (blood pudding), and more. Traditionally, fabada hails from the Asturias region. However, there are plenty of regional variations you can try throughout Spain.

For many, this colorful rice dish epitomizes Spanish food. However, many Spanish people actually see paella as a Valencian dish, not a national dish. But that shouldn’t stop you from making it at home. Traditional paellas often use chicken or rabbit (or both), but many chefs will throw in some seafood to keep things fresh. Depending on your tastes, you can opt for calamari, mussels, prawns, or even clams. If you’re feeling particularly adventurous, though, why not try a black paella? This uses black rice stained with octopus or squid ink and is a great variation on the traditional paella.

The Spanish love their seafood, and a lot of their most popular dishes showcase the very best flavors found under the sea. One of these is gambas al ajillo. Whether you try it as an appetizer or as tapas alongside plenty of other flavors, the dish will definitely stand out from the crowd. The prawns are cooked in a small clay dish filled with hot olive oil, roasted garlic, and a small pinch of chili which gives it a little kick. It is best served with crusty bread, which is perfect for mopping up all that delicious garlic sauce!

Looking to whip up some delicious tapas for your next Spanish dinner party? Then look no further than patatas bravas, a dish that is native to Spain and super easy to create. This crowd favorite typically consists of cubed potatoes which are fried in oil and served warm with spicy sauce. The dish is commonly served in restaurants and bars in Sevilla and throughout Spain. And if you’re feeling adventurous, you can always experiment with adding a number of extra toppings, such as chorizo, chicken, or fried fish.

Ever wondered what fried milk tastes like? Neither had we until we came across this Spanish delicacy. Leche frita – which translates to fried milk – is a popular dessert across the north of Spain, and a firm favorite with kids. Milk pudding is encased within a warm, crunchy batter and dusted with sugar and cinnamon. You then serve it with whipped cream or ice cream and enjoy. Another popular dessert is torrijas, a Spanish twist on French toast. This tasty dish sees thick white bread dunked in an egg custard mixture, fried up, and served with lashings of cinnamon.

If you’re putting together the ultimate Spanish dinner party, the fun doesn’t have to start and finish with the main courses. There’s plenty more you can pack into your night to keep the fun going.

When it comes to wine and cheese platters, you might naturally associate this with French cuisine. However, a great selection of wines and cheeses can be found all across Spain. From moreish cheeses like manchego to exquisite Spanish wines from La Rioja, there’s something to satisfy all tastes.

There are few Spanish drinks quite as popular around the world as sangria, and it’s easy to see why. This delicious wine-based punch is great at parties and it’s super simple to make. You’ll come across plenty of pre-made sangrias in grocery stores and supermarkets, but the best tasting is made at home. Simply mix chopped fresh fruit with red wine and add some brandy to warm things up a little. 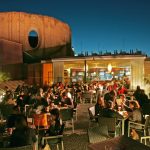