Spain is a technologically savvy country so it’s no surprise that mobile banking has taken off among its population. With around eight out of 10 Spanish residents using smartphones, the country provides a sizeable mobile banking marketplace. Our guide looks at everything you need to know about mobile banking in Spain.

N26 is the bank you'll love to use: open your bank account in just eight minutes without paperwork. Take control of your finances with one app where you can manage limits, set PIN, lock/unlock cards, and make no-fee transactions anywhere in the world

Although internet banking and e-commerce is slightly less popular in Spain than in other EU countries, mobile banking has proved popular amongst those that do use digital services, particularly among younger age groups. A 2014 study by ING showed that Spain had the fourth-highest level of mobile banking use among internet users in Europe (after Turkey, the Netherlands, and Poland).

Spanish banking providers have been quick to capitalize on this; many of the big-name banks offering mobile banking services. These coexist alongside newer digital-only providers who offer services tailored to expat banking needs.

Providers of mobile banking in Spain include:

Features of mobile banking in Spain

Mobile banking in Spain is available through banking apps. Each Spanish mobile banking provider will have its own app with features targeting users such as expats and millennials.

Features on Spanish mobile banking apps include things such as:

Different apps will also have their own unique features. Some banks allow lending through their apps, such as imaginBank (the mobile banking service through CaixaBank) where customers can borrow up to €15,000 using the app. There are also limitations to smartphone banking, such as transferring funds between foreign currency accounts. The good news for expats is that you can make cross-border payments with most apps. With bunq, you can save 3% on overseas card payments and will pay only a fraction of the surcharge on international payments in foreign currencies.

Another potential problem is Wi-Fi connection, which smartphone users will be all too aware of. This could cause problems in more rural parts of Spain; however, in general the quality of internet coverage in Spain is good.

Cash remains the preferred method of payment among Spanish residents, with 65% of overall transactions carried out this way in 2017. However, mobile payments in Spain are slowly picking up speed and the country is one of the first in Europe to implement the SEPA Instant Credit Transfer scheme. Mobile payments are financial transactions carried out using a smartphone or mobile device (e.g., Apple Watch). These include contactless payments (e.g., using your smartphone to pay for store goods), digital wallets such as the PayPal app which link to bank accounts and store/send funds, and QR codes that can be scanned to pay for things such as hotel reservations.

Mobile payment providers usually work together with banks, with apps linking up to accounts. In Spain, one of the biggest mobile payment services is Bizum which was launched by 27 Spanish banks in 2016 and has around 1.5 million users. Other widely used mobile payment apps in Spain include Apple Pay and Samsung Pay, both launched in Spain in 2016, and Google Pay (formerly Android Pay) which launched in 2017.

With threats to online security a constant concern, financial institutions across Europe have to ensure that all products released onto the digital market are as secure and protected as possible. Despite public worries over cyber-security, digital banking is fast becoming the safest way to deal with your finances as long as you take necessary precautions.

In Spain, mobile banking providers are keen to highlight the security features of their products. These include ID recognition access systems such as fingerprint, voice or photo ID, strong encryption, and card-blocking features.

Of course, your personal information is only as safe as you keep it. To avoid any nasty data breaches, make sure that you:

Spanish bank accounts are typically available for both residents and non-residents; you can open up an account before you move to the country. Some banks, as well as many of the online-only banks, are for Spanish residents only. To open an account in Spain, you’ll need to show proof of ID, address, residence status as well as NIE number if you’re a non-resident. You may also need to provide details of your employment status.

You can choose between a state-owned caja and a private banco. Or, if you want to reduce administration costs and have the flexibility of accessing your accounts from your smartphone anywhere in the world, you can choose to bank with an internet-only provider such as bunq, N26 or Revolut. See our guide to opening up a bank account in Spain for further details. 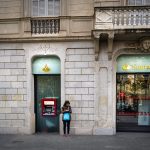