There are aspects of European, local, and Indian dishes throughout South African cuisine. Here are some of the best picks, depending on how daring you’re feeling.

One concern people often have before they move to South Africa is that the food won’t be to their tastes. The truth is that South African food is a melting pot of the best bits from its varied history. There are aspects of European, local and Indian dishes throughout the country’s cuisine, but here are some of the best picks, depending on how daring you’re feeling.

For those who want to stick to what they know…

Terrified that you won’t be able to find anything your taste buds will approve of? Not to worry – assuming you’re living in one of the big cities, you’ll find a huge range of foods representing the best of international cuisine. Johannesburg alone boasts everything from French and Italian to Brazilian and Korean eateries–and a hamburger is never far away.

For those who want a taste of South Africa

Perhaps the most famous South African export is biltong, a cured dry meat, similar to jerky (only thicker). If you haven’t sampled this flavourful snack, then getting it from a South African butcher is a great place to start–and will give you the choice between ‘wet’, ‘medium’ or ‘dry’.

Besides the biltong, the best way to sample some traditional cookery is on the braai–the South African barbeque. All kinds of meat, fish, potato and onions are cooked over hot coals outdoors, and you’ll find that every suburban house has a braai area (some even have indoor ones, too!). The pick of the grill are the sosaties (kebabs), boerewars (coarsely cut spicy sausages), steaks and ribs. You may find these meats are accompanied by pap (a traditional porridge) or vetkoek (deep fried dough balls). It makes for a very satisfying meal!

Bobotie is also a must-try. It’s a sort of spicy cottage pie. It generally consists of spiced minced meat (and sometimes fruit) baked with an egg-based toping.

If you really want to blend in with the locals, there are some (apparently!) very tasty recipes that may seem a little on the “exotic side” for Western palettes. Two dishes spring to mind – firstly Skop. Skop is the whole head of a sheep, cow or goat with skin, nose, ears and other bits removed and then boiled. Certainly not to everyone’s tastes, but maybe slightly more than Mashonzha, which is Mopani caterpillar cooked with chilli, and usually eaten with peanuts.

And to wash it down

The country’s Winelands are world-renowned, so why not enjoy some of their fine produce with your meal? The grapes from the Cape area make rather nice Pinotage and Hanepoort, both of which accompany most meats rather pleasantly. If wine isn’t your thing, then there are a number of international beverages available quite widely. Beer is also very popular, and if you want to enter the spirit, then Castle, Amstel and Black Label are all popular local brands.

Amanda Wood is a South Africa expert for key2holidays, an online tour operator specialising in South Africa holidays, as well as trips to Australia, Cuba, the Caribbean, Europe, the Far East, the Maldives, Mauritius and the Seychelles, Egypt and the Arabian Gulf. Key2holidays has a dedicated team of experienced travel. 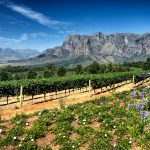