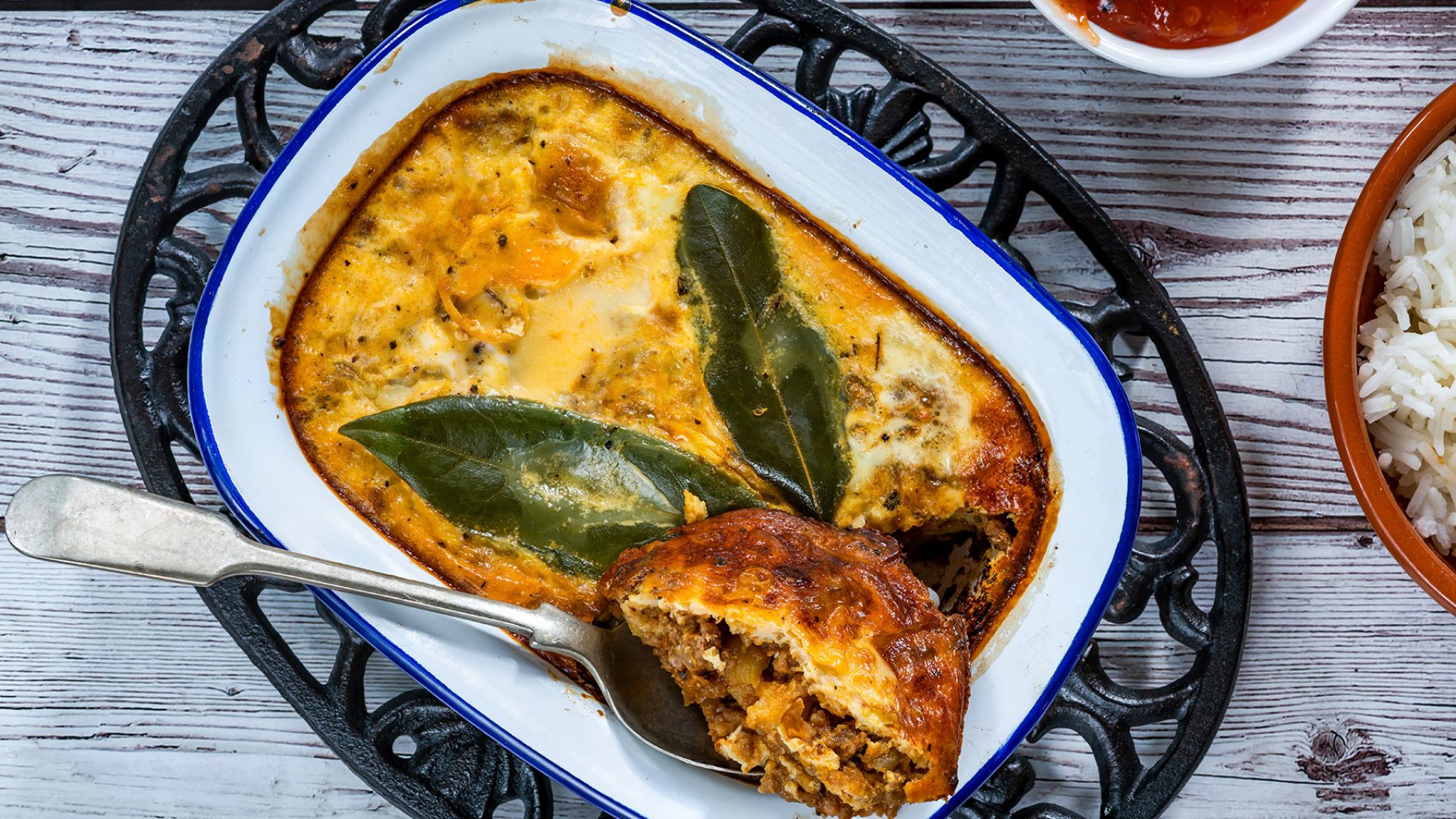 South African food has so many different influences: African, Dutch, French, German, Portuguese, Malaysian, Indian, Chinese, Indonesian; no wonder it’s the rainbow cuisine! Many of these influences are in this list of top 10 foods in South Africa.

The combination of the indigenous African population and centuries of immigration – traders, pioneers, and their slaves – has given South Africa one of the world’s most exciting and varied cuisines. Here is some of the top South African cuisine you have in store, with recipes to make them at home.

All over South Africa you can find strips of what looks like dark old leather that locals eat as a snack; this is the famous biltong. Biltong is a thinly sliced, tough and salty air-dried meat, most often beef or game like springbok, rather like beef jerky. You will also find droewors, air-dried sausages. Indigenous African peoples use to preserve meat by curing it with salt and drying in the air; European settlers added vinegar, saltpetre and spices to the mix and today’s biltong evolved meat preservation processes of 19th-century pioneers in the days before refrigeration.

Bobotie may very well be the national dish of South Africa. The dish originates from enslaved Indonesian people brought to South Africa by the Dutch East India company in the 17th century. Bobotie is made from spiced minced meat and dried fruit with an egg and milk topping. All of this goes in the oven until ready – a bit like Greek moussaka. Eat bobotie with yellow rice, some fruit chutney, sliced banana, and a sprinkling of coconut.

This is South African fast food – and it has nothing to do with rabbits. It’s a quarter or a half a loaf of white bread, hollowed out and filled with hot and spicy meat or vegetable curry (or anything else that takes your fancy). Bunny chow originated in the city of Durban, some say when migrant Indian laborers working in sugar cane plantations had to take their food into the fields. You can grab bunny chow as a takeaway all over South Africa. The very best, though, is in Durban – eat it with your hands!

When the Dutch and French settlers came to Cape Town in the 17th century they enslaved people from Indonesia to work on their lands. These enslaved people used their own spices and traditional cooking techniques with local African ingredients to create aromatic curries and stews – spicy but not fiery, and sweet – now known as Cape Malay curry. There are a great many variations.

Another South African specialty from the Western Cape, is koeksister, syrupy doughnut. The name comes from the Dutch koekje – say it out loud and you’ll hear what it means: cookie. Adept bakers twist or braid the koeksisters into one of two types. The Cape Malay is spicier and comes with dried coconut; the Afrikaner is crispier and has more syrup. Both are crunchy and sticky on the outside, and moist and syrupy on the inside.

This delicious baked egg custard tart is a pastry case with a fluffy mixture of eggs, milk, and sugar. It’s an Afrikaan recipe with Dutch influences. Enjoy your melktert with a dusting of cinnamon after a meal as a dessert or as a treat with a cup of coffee.

This is South African comfort food at its sweet and sticky best: malva pudding. Malva pudding came from the Cape Dutch settlers and is a spongy cake-type pudding made with sugar, eggs, flour, butter, and apricot jam. As soon as it’s out of the oven, a hot sweet and creamy sauce goes over the top of the pudding. Malva pudding is often served up after Sunday lunch in South Africa and can be enjoyed with custard, ice cream, whipped cream, brandy butter, crème anglaise, or whatever your choice.

Shisa nyama means ‘burn the meat’ in Zulu and means meat – steak, chicken, kebabs and boerewors (spicy ‘farmer’s sausage’ which is coiled up like a snake) ­ – cooked over the fiercely hot wood fires of a braai (barbeque). Eat with chakalaka (a spicy tomato and bean relish) and pap (a white corn maize porridge rather like the US grits).