With more than 10,000 German festivals, including some of the world’s biggest and strangest, Germany is certainly a place sagacious souls can appreciate. From the raucous parties of Karneval and German music festivals to the acclaimed Berlinale film festival or the famous German Christmas markets, there are German celebrations for all tastes and ages.

Some of the traditional festivals in Germany include Bayreuth’s Richard Wagner music festival, Munich’s restrained commemoration of beer, Oktoberfest, the world’s largest trade fair for books in Frankfurt and the Munich Opera Festival.

Since the mid-1980’s, however, there has been a rapid expansion of new, more niche-market festivals in Germany. Night owls and museum geeks can revel together during Berlin’s Long Night of the Museums, an evening when the city’s museums and cultural institutions stay open into early hours. Fans of avant-garde film can fill their heads with new, esoteric anecdotes at Videonale, Bonn’s German festival for art and experimental videos. Even secret Dungeons and Dragons lovers can find a home at Bavaria’s medieval re-enactment festival Festival-Medieval. This is also alongside a world-class range of German music festivals, some receiving thousands of international visitors.

Whether you’re just visiting Germany or have lived here for a while, attending German festivals can be an easy and exciting way to discover German culture and local German food. You can also check which German festivals coincide with German public and school holidays or read our pick of top 10 German festivals.

Epiphany is widely celebrated in Germany every year with churches and locals setting up Nativity scenes or sometimes, re-enacting the popular Bible story. Some volunteers dressed as the three kings even go house-to-house caroling and collecting donations for charities.

The world’s second largest film festival after Cannes, the Berlinale draws a crowd of more than 500,000 attendees from all across the world.. The festival showcases a wide variety of films, including big international movies, independent and art house productions, movies aimed at younger audiences, German productions and more experimental films.

One of the world’s oldest video art festivals, Videonale boasts both stars and up-and-coming young artists of the international video-art scene. Launched in 1984, the biennial Videonale counts as one of the most renowned festivals of video art in the world. The German festival runs from 21 February–14 April 2019.

The 40-day period before Ash Wednesday is also Karneval season in Germany. It’s a time when the typically orderly Germans let loose and party. Parades, costume balls and other such festivities take place throughout the country, often varying widely according to local traditions. Read Expatica’s guide to celebrating Karneval in Germany.

The Leipzig Book Fair is Europe’s biggest festival of literature and features more than 2,600 events held at 350 difference venues. An ideal communication platform, the Leipzig Book Fair provides extensive information about new publications as well as current and future trends in the German speaking and European markets. The next edition is from 21–24 March 2019.

Perhaps the most exciting time of the year for the Bavarian State Ballet is Munich Ballet Week (Bayerische Staatsballett), when they and other international companies put on a week’s worth of performances that always succeed in enchanting audiences. Over the last few decades, this event has become one of the most prestigious of its kind, drawing visitors from across Europe and beyond. Runs from 11–18 April 2019.

April to May: Thuringia Bach festival

The Thuringia Bach festival (Thueringer Bachwochen) specializes in Baroque music and performing the works of Johann Sebastian Bach in authentic sites. The festival appeals to music lovers and tourists alike. This year’s festival will take place from 12 April–5 May 2019.

Goths, cyber goths, steam-punks and anyone else into the ‘dark’ arts may want to head for the Wave-Gotik-Treffen festival to enjoy the best of dark music and culture, with bands, fairs and events with medieval and gothic themes. The event, now one of the world’s largest of its type, was considered so subversive in the days of the German Democratic Republic that it was banned. The Wave-Gotik-Treffen will run from 7–10 June 2019.

Many a saintly visitor goes marching into Dresden in late May to check out the city’s festival of Dixieland and early jazz music. Known particularly for its open-air events on the Elbe River, the festival boasts over 350 artists every year. Don’t forget to drop by the Dixie parade and to catch a show by one of the city’s many street performers. This year’s festival will take place from 19–26 May 2019.

The International Africa Festival in Würtzburg, runs from 3 May–2 June 2019, is one of the largest festivals in Europe for African music and culture.

Rhein in Flammen (Rhine in Flames) is a series of spectacular firework displays lighting up the castles and vineyards on the banks of Germany’s famous river in different locations. In 2019, the German festival will have events taking place all over the country starting in May until September.

On the first Saturday in May, you can catch the event in Bonn at the Rheinauen Park. July brings the Rhein in Flammen to Rüdesheim-Bingen area, along the river between Trechtingshausen and Bingen. Finally, Oberwesel celebrates the Rhine in Flames in early September with a music-synchronous fireworks display.

You can view the shows from illuminated boats on the Rhine; ashore there are concerts, fairgrounds, food, drink and many other entertainment.

After escaping the bubonic plague back in 1634, the villagers of Oberammergau gave thanks to God by vowing to perform their now world-famous ‘Passion Play‘ every 10 years. Over 400 years later, they continue to do so. Of the 5,300 or so population, around 2,000 are involved in the play, which re-enacts Christ’s life leading up to his crucifixion and can last up to eight hours (including a three-hour interval). The next performance will be in 2020, but the Passion Play Theater is open for tours and other cultural performances in the meantime.

These are two massive rock festivals that take place simultaneously over three days: Rock am Ring (Rock in the Ring) in Nürbergring and Rock im Park (Rock in the Park) in Nuremberg. The same artists from a range of music genres appear at each venue, performing to combined crowds of around 160,000, making this one of the largest music festivals in the world. Check out the website for the line-up for the next festival, which is 7–9 June 2019.

Kieler Woche, or Kiel Week, is not only the largest sailing event in the world — with over 2,000 yachts, tall ships, dinghies, and surfboards taking part — it’s also a massive open-air music and cultural festival with an accompanying children’s cultural festival. What started life as a one-day regatta over 100 years ago is now a week-long event where you can watch Olympic and international sailors race, a windjammer parade of tall ships and take your pick from some 300+ musical events. Keiler Woche runs from 22–30 June 2019.

Held every year at the Bayerische Staatsoper (the Bavarian State Opera), the Opernfestspiele consists mainly of shows staged during the past year and always concludes with a piece by Wagner. In 2019, the festival opens on 18 June and runs until the 31 July.

The month-long Bayreuther Festspiele is held annually in the Bavarian town of the same name. Wagner himself oversaw the construction of the Bayreuth Festspielhaus, the theater where concerts from the composer have been performed since 1876. The 2019 program starts 25 July and runs until 28 August.

August: Long Night of the Museums

From its beginning in 1997, almost all of the city’s 80 museums and memorials have taken part in the long night. Each event offers a different combination of museums and a new program (with ever more museums and initiatives joining in) so that visitors are guaranteed a diverse experience and new discoveries every time. In 2019, the event will take place on 31 August from 18:00 to 02:00 the next day.

The Festival-Mediaval is a living history and re-enactment festival in Selb. The event includes performances of medieval music, fire shows, roaming performers such as witches and beggars, theater groups and a medieval market. If you’ve ever had a hankering to try your hand at archery while munching on a medieval snack, then this festival is for you. This year’s festival will run from 6–9 September 2019.

Each year a grand German music festival is held in the town of Bonn, incorporating concerts, workshops and events in the Beethovenhalle concert hall. International and local visitors descend upon Bonn to hear a number of internationally acclaimed guest articles and orchestras. The next important step is working up to 2020, Beethoven’s 250th birthday, when Bonn will play an important role in the German celebrations as Beethoven’s birthplace. In 2019, the festival runs from 6–29 September.

One of Germany’s most famous festivities and the world’s largest fair, Oktoberfest is a 15-day celebration of Bavarian beer. More than six million people come to drink beer, eat chicken legs and pork sausages and engage in general revelry. Join them from 21 September–October 2019.

The world’s largest trade fair for books dates all the way back to 15th century, when Johannes Gutenberg first invented movable type just a few kilometers away from Frankfurt. Soon after, local booksellers held the first book fair. The Frankfurt Book Fair (Frankfurter Buchmesse) is now primarily for people in the industries surrounding books, although it does have some more layman-accessible events, such as its award for the oddest book title of the year. In 2019, the Frankfurt Book Fair is held 16–20 October.

St. Martin’s Day is the feast day of Martin of Tours, who began his life as a Roman soldier and ended up a monk. St. Martin’s most famous deed is that he once cut his cloak in half to share with a beggar during a snowstorm, thereby saving the beggar’s life. That night, Martin dreamed that the beggar he had helped was Jesus.

On St. Martin’s Day, which is celebrated in many areas in Germany, children go from house to house with paper lanterns and candles and sing songs about St. Martin in return for treats. Many places also have public festivals to celebrate the saint that include re-enactments of St. Martin’s donation of his cloak and the serving of the traditional dish of roast goose, or Martinsgans.

Nearly every German city and village sets up a Christmas market during the Advent season. Giving you a reason to brace the cold, visitors can ride a Ferris wheel; browse through the stands selling handicrafts, wooden toys and ceramics; sample the hot mulled wine (glühwein) and hot chestnuts; or just absorb the merry atmosphere. These fairs have proven so popular that other countries have started copying the German-Austrian tradition. Notable Christmas markets are in Berlin, Munich, Nuremberg, Lübeck, Münster, Stuttgart and Heidelberg. Read our guide to German Christmas markets. 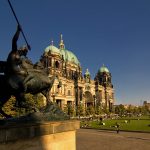 The best museums in Germany 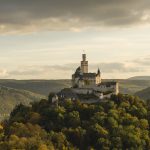 The most beautiful Rhineland castles to visit