Swiss formality manifests itself in handshaking and name-dropping, which is taken to absurd lengths. But is their formality mistaken for good manners?

The Swiss are an unbelievably polite nation. However, their formality and reserve, not to say downright shyness, can often be mistaken for good manners.

Swiss formality manifests itself in handshaking, which goes to absurd lengths. Even schoolchildren shake hands when meeting in the street. Once familiar to a shop owner, customers qualify for that establishment’s handshaking list to have their hand thoroughly shaken every time they appear on the premises. All customers, regular or not, receive warm greetings in Swiss shops, and farewells include the equivalents of ‘have a nice day’ and Saturday’s favorite, ‘have a nice Sunday’.

The assorted Swiss languages do not help people to relax either. They all have a formal and a familiar form of ‘you’ – Sie and du, vous and tu, lei and tu. Teenagers will call each other by the familiar form from first meeting, but once grown, the two forms of ‘you’ remain a solid barrier. One cannot even relax after crossing the hallowed divide between the formal and familiar form. It is just as rude to get it wrong the other way.

It is essential to remember other people’s names in Switzerland. The Swiss are unable simply to say ‘good morning’ to their neighbors, but must always include their neighbors’ name.

It is also impolite to answer the telephone with just ‘hello’. The Swiss answer their telephones with the name and surname. The caller must remember not just to say ‘goodbye’, but to use the other party’s name as well.

Similarly when calling, in business or privately, the Swiss always announce themselves with their surname. Thus when telephoning directory enquiries, or train information, the first thing one does is say one’s name. 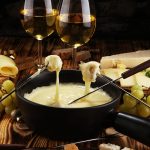