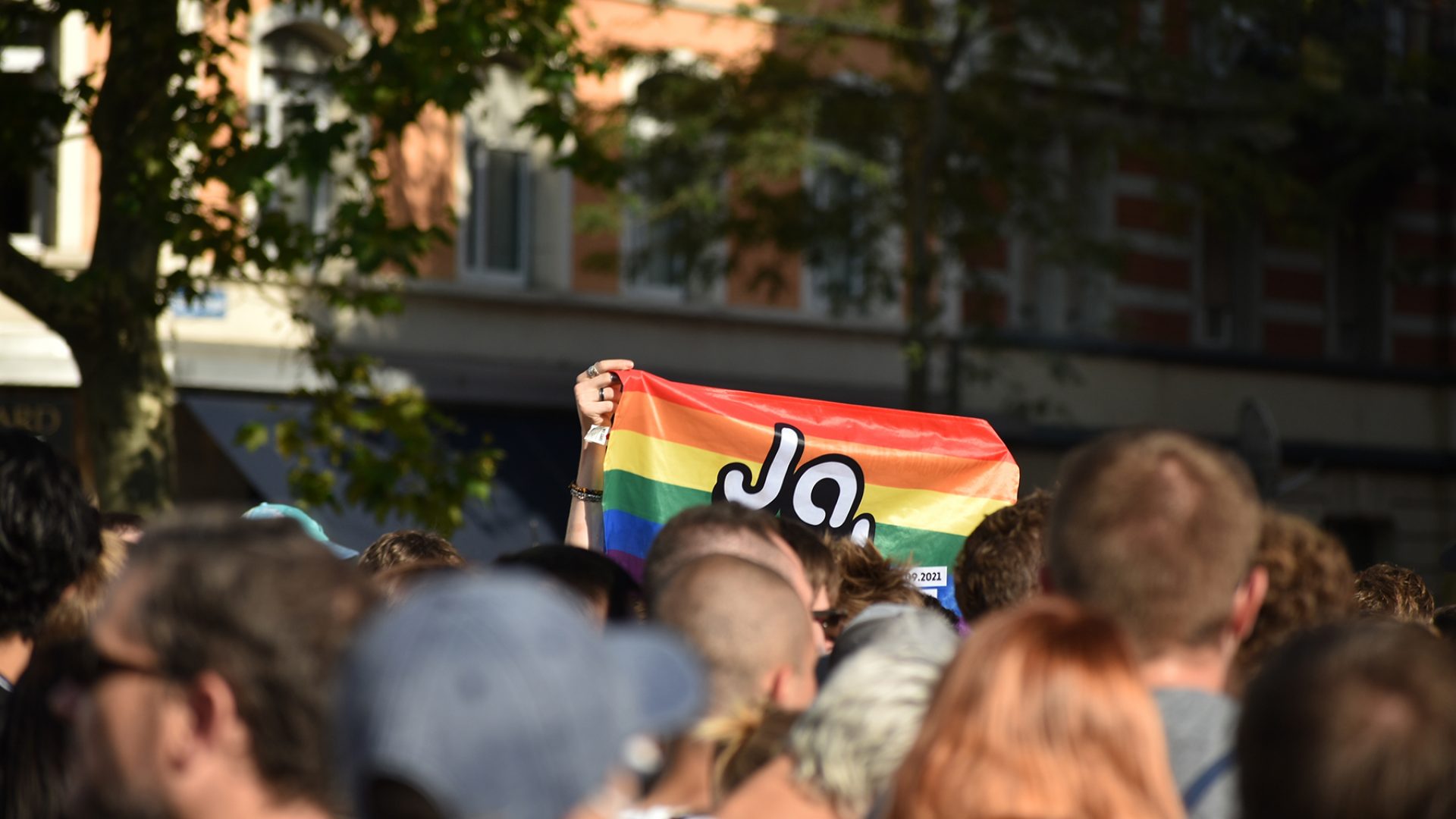 From gay marriage to societal attitudes and recent laws, we explore all there is to know about LGBT+ rights in Switzerland.

When it comes to LGBT+ rights and policies, Switzerland has historically lagged behind most of Western Europe. That said, since the 1940s, the country has been liberalizing civil rights for LGBT+ people, making it one of the safer countries in the world for the community. In the past decade, there have been marked changes in the civil rights afforded to lesbian, gay, transgender, bisexual, and intersex people. On 26 September 2021, the Swiss took another major step, voting to approve the legalization of gay marriage and adoption rights.

To help you understand the landscape of LGBT+ rights in Switzerland, this helpful guide provides the following information:

Switzerland ranks 22nd on the 2021 ILGA-Europe rating of 49 European countries. These ratings are based on the agency’s research into civil rights, safety, parenting rights, freedom of expression, and whether it is an excellent place to live for LGBTQ+ people. Despite its near central position in the rankings, Switzerland has improved since the previous year, when it ranked 27th out of 49 countries. It also ranks 25th out of 150 countries on the LGBTQ+ Travel Safety Index in 2021.

In summary, same-sex acts became legal in Switzerland in 1941, and the age of consent (currently 16 years old) has been the same for both homosexual and heterosexual people since 1992. Switzerland also recognized same-sex unions in 2007 and legalized same-sex marriage in 2020. That law was challenged and survived a referendum in 2021. Since 2018, transgender people have been able to change the status of their gender without the previous requirement of sex-affirming surgery. Since 1999, the Swiss Constitution has also guaranteed LGBT+ citizens equal treatment before the law. Furthermore, homophobic discrimination has been a criminal offense since 2020.

A poll commissioned by Pink Cross in November 2020 showed that 82% of Swiss people surveyed believe in same-sex marriage. Switzerland recognized civil unions in 2007. On 18 December 2020, the Swiss Parliament amended the Swiss Civil Code to allow same-sex marriage. It changed its wording from defining marriage as “a union between a bride and a groom” to a “union between two people”.

This amendment made gay marriage equal to heterosexual marriages under the law. The amendment also allowed sperm donation from sperm banks to lesbian couples and recognized both women as equal parents under the law. However, the law was challenged by conservative political parties. They collected enough signatures to force a referendum on the matter. The referendum on 26 September 2021 saw just over 64% of Swiss vote to approve gay marriage and adoption rights.

Read our Guide to getting married in Switzerland

Prior to the 2021 referendum approving changes to the law, the adoption rights of LGBT+ couples in Switzerland were limited. A gay couple could not jointly adopt. Nor could they adopt a child that was not biologically related to one of them. The amended law gives same-sex couples the same rights as heterosexual couples in this regard. In other words, a gay couple can adopt children unrelated to either of them.

In December 2020, the amendment to the Swiss Civil Code allowed married lesbian couples access to domestic sperm banks and for both women to be recognized as full parents. This was reinforced by the 2021 referendum. However, commercial surrogacy for gay married men is currently not permitted by the law.

Discrimination against LBGT+ people in Switzerland

The 2021 referendum built on progress made the year before. In February 2020, 63.1% of people voted on a referendum making discrimination on the basis of sexual orientation and identity illegal. This was a much higher percentage than officials were expecting. The passing of the anti-discrimination referendum was a huge victory for groups that fight for LGBT+ rights in Switzerland.

It also shows that most people favor these rights throughout the country. Generally, the groups that voted no did so on the basis of religious rights and free speech. Essentially, the new law prohibits discrimination and hate speech based on sexual orientation in public.

LGBT+ discrimination in employment in Switzerland

Although the General Equality Act does not explicitly mention gender identity, it does afford protection to everyone regardless of gender identity. Furthermore, any case brought up by a trans-identified person has never been denied. According to Article 261bis of the Swiss Penal Code, discrimination based on race, ethnicity, and sexual orientation is outlawed. Therefore, discriminatory termination based on sexual orientation is against the law. Harassment is also illegal. There are currently measures against discrimination that cover access to employment, promotions, employment termination, and pay.

There are also laws in place that prohibit discrimination in the workplace against people who identify as trans. This includes protection against a reduction in salary, placement in a different work assignment, or termination of work due to identity. It is also against the law to prohibit a trans person from wearing the clothes, hairstyles, or make-up as they choose to fit their gender. Furthermore, trans persons are under no legal obligation to reveal that they are trans. In summary, employers are obligated to ensure the equal treatment and safety of employees regardless of gender.

LGBT+ discrimination in housing in Switzerland

The Swiss Civil Code prohibits any form of discrimination based on sexual orientation or gender identity by mortgage lenders or property owners. Legal measures are also in place to ensure access to housing and address the risk of homelessness in young LGBT+ persons. In July 2020, Zurich and an LGBT+ rights association also announced plans to build retirement housing for LGBT+ seniors by 2025.

Read more about housing in Switzerland

LGBT+ discrimination in education in Switzerland

Tremendous improvements have been made in LGBT+ education since 2019. Students have access to and are taught information on sexual orientation and gender identity. Teachers also have access to teaching materials and training on the subject. Additionally, all schools have equality policies for students.

LGBT+ discrimination in healthcare in Switzerland

In Switzerland, gay men who want to donate blood must have been abstinent for twelve months. Furthermore, Swiss health insurance companies have received criticism for not covering some of the needs of the LGBT+ community. Trans men, for instance, need gender-appropriate medication that is often not covered by their health insurance policy.

Read our Guide to healthcare in Switzerland

Doctors also require psychological confirmation before they can administer hormones or refer patients for surgeries. A ‘diagnosis’ of transgender is also required. In some cases, doctors may require up to two years of therapy. Several hundred trans people are currently under medical supervision in Switzerland.

LGBT+ discrimination in the military in Switzerland

In Switzerland, military service is compulsory for men between 18 and 34 years old and voluntary for women. Following a referendum in 1992, homosexuality and bisexuality no longer feature in the Military Criminal Code. In 2013, the military changed its policy to include trans persons with a medical examination that determines whether they are in good physical health. Since then, some transgender people have served. There is currently a diversity office, and since 2019, draftees have been able to specify their gender identity independent from their assigned sex.

Violence and hate crimes against the LGBT+ community in Switzerland

Unfortunately, there is still no general anti-discrimination legislation or state support for LGBT+ victims. In 2020, the Lesbian Organization Switzerland (LOS), Pink Cross, and the Transgender Network Switzerland (TGNS) also reported a significant increase in reported LGBT+ assaults. These organizations believe that many victims are hesitant to report these crimes to the police or don’t know where to seek help.

As a result, they have called for politicians to launch national awareness campaigns and create a national reporting office on hate crime in Switzerland. According to IGLA-Europe, Switzerland lacks protection for transgender and intersex persons and doesn’t do enough to combat hate crimes. Generally speaking, however, the bigger cities such as Zurich, Lucerne, and Basel have more tolerant populations than rural areas.

According to official statistics, approximately 40 children are born intersex each year in Switzerland. Since 2018, the government has put new measures in place that make it easier to change one’s gender on official documents. However, Switzerland only recognizes male and female as official genders and a third (non-binary) is not an option. In fact, in November 2020, a Swiss citizen was denied recognition of their gender as the authorities argued that registering non-binary genders was against public order. There is currently an appeal against this decision.

To change your name and gender on official documents, you must first contact the canton administration where you live. It is important to note that each canton has different laws. For instance, some may require medical records; even though there is no such law that obligates a trans person to undertake hormone therapy or surgeries. Others, meanwhile, may require proof that a person has lived under their chosen name and identity for at least two years.

In English, non-binary people often go by they or them. In the languages of Switzerland, this works slightly differently.

Public attitudes towards LGBT+ in Switzerland

Learn about the official languages in Switzerland

Generally speaking, Switzerland is tolerant and gay-friendly. The cities of Zurich, Geneva, and Basel are the centers of gay life. Meanwhile, Zermatt and Arosa also among the most gay-friendly ski resorts in the world. The Italian-speaking canton of Ticino also held its first Gay Pride event in 2018.

The LGBT+ rights movement in Switzerland

Numerous LGBT+ organizations are operating on both a regional and national level in Switzerland. Most information is in French or German with some Italian. The Lesbian Organization Switzerland (LOS) was founded in 1989, while Pink Cross was founded in 1993 to advocate for gay and bisexual men’s rights. Both groups work on representation, visibility, and civil rights. The Transgender Network Switzerland (TGNS), meanwhile, advocates for the transgender community.

There are several Pride Parades throughout Switzerland, the largest of which is Zurich Pride, which was first held in 1994. Most cities in Switzerland also have a vibrant and thriving LGBT+ bar and club scene.

On international Coming Out Day, on October 11, many schools, universities, and institutions throughout Switzerland also host events such as lectures or film screenings to celebrate diversity.

There are many LGBT+ politicians in Switzerland, including the Mayor of Zurich, Corine Mauch. Michael von der Heide of Eurovision fame is also openly gay, as is blues singer Naomi Lorraine. In 2018, Fabienne Peter also became the first transgender woman in a sports league. Every May in Zurich, the Pink Apple LGBT Film festival also promotes positive representation in the arts and media.