Cycling in the Netherlands

The best way to appreciate Dutch life is to travel like a local and hop on a bicycle. Here’s a guide to cycling in the Netherlands.

One of the best ways to appreciate the Netherlands is to take a bicycle ride through its beautiful landscapes. The Netherlands boasts 20,000km of fietspaden (bicycle paths) making cycling an extraordinarily pleasant activity, and one not exclusively for the very fit or sporty; although you will have to put up with a spot of rain every now and then.

Cycling in the Netherlands? Get yourself covered for every eventuality by taking our liability insurance. With FBTO, you're covered if someone is injured or someone else's property is damaged by your or your family while out on your bikes. Sign up for liability cover and get peace of mind on the bike paths by taking out a policy with FBTO.

Get a quote today

Introduction to cycling in the Netherlands

The Netherlands has more bikes than the country’s 16-plus million citizens. In fact, many people have at least two bikes, one (in not-so-excellent condition) for everyday use and the other for excursions. You don’t have to be here long before realizing that bikes rule; children learn to ride before they walk.

Peddling pensioners ride alongside stockbroker types in tailored suits and women in short skirts; parents often have two or even three kids strapped on and they’re all singing; cyclists carry anything on the back of a bike while rolling a cigarette with the other hand. Fancy racing bikes with a hundred gears are simply not necessary to explore this country.

And, everyone does it. Yes, people use their bikes to get from A to B, but they also ride bicycles to discover Rotterdam’s harbor the coastline, the countryside and a plethora of charming villages peppered around this, extraordinarily, bike-able country.

A network of cycle paths replete with cycle bridges, tunnels, and ferries await anyone curious about exploring the Netherlands on two wheels. The abundance of paths means cyclists rarely have to share space on the roads with cars.

The coastline, forests, maritime harbor villages, meandering rivers, rolling hills are accessible by bike. Armed with a few maps, water bottles, and a bicycle repair kit, it doesn’t take a heap of planning before setting off.

Exploring by bike is extra special, particularly because it’s your peddling that got you there. But you will also notice things about a place and the people that you wouldn’t in a car. Locals are often nicer to cyclists because they appreciate the effort made to visit.

Your bike should be tuned up (bell, gears, brakes and lights working) and you should feel comfortable on the saddle. Repair kits are cheap and easy to find. Or, hire a bike from any of the main train stations. Wear comfortable clothing and bring water bottles.

It’s possible to buy a ticket for your bike on the train if you decide to pedal one way and train it back! A ticket for a bike for a day (Dagkaart Fiets), costs €6 but you must place the bike in the appropriate car on the train.

If you are keen to combine biking and train travel, the Lentetoer train ticket is available between 21 March and 15 June allowing two people one day of unlimited train travel in first class for €39.

The 2008 address book for Friends on the Bike is available by going to their website for €9. The rates for B&B may vary but won’t exceed €17 per person per night, a steal in comparison with most hotels. Remember you can’t just turn up as reservations are necessary at least 24 hours in advance.

If you want to reserve, you must become a member to receive the address book. Sometimes you can ask for a packed lunch for a maximum of €4. At a few addresses dinner is available for about €8 per person. It’s also fun to stroll around the village once you’ve dumped your bike and gear off at the B&B for the night and try a local café.

To blend in with the crowd, select your Gazelle or Batavus city bike from one of the many bicycle dealers in Amsterdam.

Kroonenberg Tweewielers and Bob Orange Bicycles are both centrally located and have good selections of new touring or mountain bikes and second-hand city bicycles; a new Batavus Flash City Bike should cost around EUR 600. Their technicians will service and repair your bike, as will any good bike dealer in the city. In fact, should you get a puncture on the way to work, there will always be a nearby store that can repair it for you in time to pick it up on the way home.

From these shops, you can get a reconditioned second-hand bike for about EUR 300. If you would like something cheaper, there are bike dealers in Waterlooplein market; get there early in the day for a good selection.

Before looking for an expensive bicycle, make sure you have a safe place to store your bike and a really good set of locks. Wheel locks are available from EUR 20 but are usually fitted as standard, and you will need an extra lock to fasten the bike to something solid. A good one will set you back EUR 120.

If you are looking for something special, try Kaptein Tweewielers, which has a good selection of racing and mountain bikes. It runs “fiets klinics” for beginner racers. For a racing bike, prices start at around EUR 720 but can cost thousands of euro for a high-end model. For an eye-catching chopper bike go to the Chopperdome Amsterdam, where the colourful and cool bikes start at EUR 400 but can cost as much as EUR 4,000.

Cycling with a child

Once you’ve caught the cycling bug, having a child seat fitted front or back costs about EUR 75. Most dealers stock these seats, including Halfords, which offers a good range of accessories and new bikes for adults and children. If you haven’t the stamina to carry toddlers and the weekly shopping home, a cargo bike from Bob Orange Bicycles will set you back about EUR 1,500. Consider it a good investment.

All about the bakfiets

Bicycles have been a staple of Dutch society since their invention in the 19th century. But the bakfiets has had its own place in history. Cargo bikes, which followed the invention of the standard bicycle fairly quickly, were originally used for industrial purposes. They moved goods such as bread, milk, and mail. They fell out of favor with the rise of motor vehicles, but have since seen a resurgence in popularity.

These days, the bakfiets is generally used to carry far more precious cargo: children. But the bakfiets’ popularity has also become one of the leading green methods of transportation. It captured the attention of eco-conscious millennials trying to reduce their carbon footprints. Now, with so much more interest in buying a bakfiets, there has been an increase in innovation and design.

The Netherlands Board of Tourism
www.holland.com/

Taking your bike on the train: 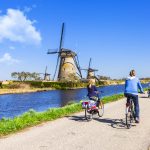 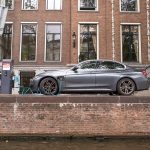