The 10 best museums in the Netherlands

From Dutch art and culture to modern history and science, we explore the most popular museums in the Netherlands that are well worth a visit.

Despite being a relatively small country, the Netherlands boasts a huge variety of museums that reflect all aspects of Dutch art, culture, and history. Amsterdam alone is home to more than 50 museums, many of which are famous throughout the world. With so many on offer, it comes as no surprise that Dutch museums cover an impressive range of topics. From Golden Age art and World War II history to post-modern architecture and modern science, there is to satisfy all interests. Just check out these top museums in the Netherlands.

Want to explore the best of Dutch culture? Then check out online ticketing platform Tiqets and buy tickets to top museums, attractions, and cultural events throughout the Netherlands. Whether you purchase them in advance or last minute, you can get digital tickets instantly sent to your phone with no fuss.

But before you go, here’s a little tip. If you’re planning on staying in the Netherlands for a long period of time, it might be worth investing in a Museumkaart. This handy little card costs €64.90 and grants you unlimited access to over 400 museums throughout the country for a year. This can work out cheaper than buying individual tickets if you plan to visit a few.

Located on Museumplein in Amsterdam, the Rijksmuseum houses one of the most impressive art collections in the world. Some of the most famous paintings from the Old Masters of the Dutch Golden Age can be found here. These include Vermeer’s The Milkmaid, Rembrandt’s Night Watch, and Van Gogh’s Self-portrait. The colossal 30,000-square-meter museum also contains around 8,000 objects spread across its four floors. These include sculptures, glass, Delftware, furniture, clothing, and archaeological artifacts dating back 800 years. Needless to say, there is more than enough to fill a visit.

Also located on Museumplein, the Van Gogh Museum is another essential stop for those interested in Dutch art. Most of Van Gogh’s work, including 200 of his paintings and 500 of his drawings, are on display here. These include his most famous masterpieces Sunflowers, Almond Blossom, and The Potato Eaters, alongside many of his earliest self-portraits. The museum’s permanent collection also includes important works by Van Gogh’s contemporaries from the 19th century; namely Gauguin, Toulouse-Lautrec, and Monet. Depending on when you visit, you might be lucky enough to catch a temporary exhibition which focuses on the same period. One such exhibit, Your Loving Vincent, offers visitors a unique opportunity to see the artist’s greatest letters alongside his masterpieces.

No account of the Nazi genocide of the Jewish population during WWII is more well-known than that of Anne Frank. Every year, over a million visitors come to the Anne Frank House to see where the young girl and her family and friends went into hiding to escape the Nazis. Located on the Prinsengracht canal in central Amsterdam, the museum allows visitors to walk through the tiny 75-meter-square annex and gain a sense of what life must have been like during her two years in hiding. It was within the confines of this hidden space, concealed behind a movable bookcase, that Anne wrote her world-renowned diary. A collection of personal belongings, family portrait photos, and Anne’s original red-checked diary helps to convey her inspiring story. The museum is only open to visitors who reserve a time slot between 9:00 and 15:00.

Located in the charming medieval city of Haarlem, the Frans Hals Museum is home to the most famous 17th-century paintings by the renowned Dutch Golden Age painter, Frans Hals. The famous artist specialized in painting people; from the wealthy citizens of Haarlem to less prominent people such as the village idiot and laughing fishermen. Visitors to the museum can see some of his most famous paintings from the Golden Age alongside contemporary art installations; allowing them to view them in a totally unique way. The museum is split between two locations, Hof and Hal, which are situated within a short walking distance from each other, giving visitors the chance to stroll through Haarlem’s scenic historic center.

Located in Amsterdam, the NEMO Science Museum is the largest science center in the Netherlands and one of the most popular among curious minds. A different scientific theme is presented on each of its five floors, beginning with an exploration of DNA and chain reactions – look out for the giant dominoes and flying car. From here, visitors can move up through the different levels of the building, learning as they go. Along the way, they will discover several key features including a science lab, a display about the human mind, and a performance hall that screens movies about science. The top floor, meanwhile, has a café which offers a fantastic view of Amsterdam down below. Crammed full of exhibitions, experiments, demonstrations, and workshops, the museum is also one of the most popular family attractions in the Netherlands.

Located in Hoge Veluwe National Park, one of the largest nature reserves in the Netherlands, the Kröller-Müller Museum is home to the second-largest Van Gogh collection in the world. Almost 90 of his paintings and 180 of his drawings can be found here. The enormous collection belongs to German art collector Helene Kröller-Müller who recognized the artist’s value early on and spent her life gathering his work. The museum also houses other priceless pieces by various Old Masters including Claude Monet and Piet Mondriaan. And within its grounds is a beautiful garden that features more than 160 sculptures. The museum, along with the stunning nature reserve, is one of the most popular places to visit in the Netherlands.

Located in the picturesque village of Zaanse Schans, the Zaans Museum offers a glimpse into the culture and heritage of the Zaan region over the centuries. Surrounded by traditional wooden houses and 17th-century windmills, the museum is a recreation of a traditional Dutch village spread across three locations; the Cooperage, the Jisper House, and the Weaver’s House. Visitors can peek inside a preserved fisherman’s house from the 1950s and go inside a working windmill to watch a craftsman hard at work. They can also explore displays of regional Dutch costumes and visit workshops on artisan crafts such as wooden clog carving and barrel making. At the heart of the museum, the Verkade Experience also features exhibits on chocolate and biscuit making. Needless to say, there is plenty to fill a visit to this colorful museum.

Located in the heart of The Hague, close to the Binnenhof, the Mauritshuis is home to the most prominent Dutch and Flemish paintings of the 17th century. Among the two hundred masterpieces on display are Vermeer’s Girl with a Pearl Earring, Rembrandt’s The Anatomy Lesson of Dr. Nicolaes Tulp, and Potter’s The Bull. Decked out with silk walls, sparkling chandeliers, and monumental painted ceilings, the building alone is worth a visit. In fact, it is listed among the top heritage sites in the Netherlands. Each year, hundreds of thousands of visitors come to admire its Golden Age treasures. The Mauritshuis also hosts regular temporary exhibitions that center on certain aspects of 17th-century life. Therefore, it’s worth checking the website ahead of your visit to see what’s in store.

The Netherlands is famous for its blue and white Delft pottery which is made in the beautiful Dutch city of the same name. Visitors to Royal Delft can walk through the original – and last remaining – factory where Royal Delftware is still being produced today. They can learn about the history and production process of Royal Delftware and watch a skilled artist hand-paint a traditional porcelain piece using centuries-old traditions. The museum also displays exclusive tableware used by the Dutch royal family which carries the official Royal Delft trademark. Visitors can end their tour by browsing a treasure trove of Delftware in the huge gift shop. This sells everything from small gifts to elaborate collectibles fit for royalty.

Many people consider the abstract and post-modernist Groninger Museum to be a work of art in itself. But beyond its playful design, the building is home to an extensive collection of art, fashion, photography, and design. It consists of three main pavilions; a silver cylindrical building designed by Philippe Starck, a yellow tower by Alessandro Mendini, and a pale blue deconstructivist space by Coop Himmelb(l)au. The museum’s permanent exhibition includes a world-renowned collection of Chinese and Japanese porcelain and paintings by the local Groningen artist collective, De Ploeg. Its temporary exhibitions, meanwhile, have previously paid homage to David Bowie, The Rolling Stones, Nordic art, and Cuban art. Each year, around 200,000 people visit the museum, making it the most popular in Groningen. 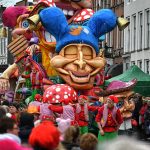