Study in the Netherlands at the oldest Dutch university. Leiden University was founded in 1575 by the Prince of Orange, William the Silent.

The oldest university in the Netherlands, Leiden University was founded in 1575 by the Prince of Orange, William the Silent. According to legend, Prince William chose Leiden as the site of the new school to reward its people for bravely fighting the Spanish, who forbade study in the city and ruled the Netherlands at the time. Despite this decree, Leiden University survived and over the centuries, established itself as one of the country’s foremost institutions of higher learning.

Though the school was originally housed in a succession of churches and convents, Leiden University’s buildings are now spread throughout the city of Leiden. Twenty percent of local residents are university students, many of who belong to studenten verenigingen, the Dutch equivalent of fraternities and sororities. Long established at the school, these prestigious groups have contributed to Leiden University’s storied reputation, bolstered by its long association with the Dutch royal family. The town of Leiden also offers plenty of places for socializing outside of class, including clubs, pubs and restaurants.

Leiden University has nearly 50 bachelor’s degree programs, one of which, the liberal arts degree offered by Leiden University College The Hague, is taught in entirely English. There is also a BA in Dutch studies for foreign students who wish to learn Nederlands, but have no prior experience with the language. The law school in particular is well known and highly regarded.

The motto of Leiden University, Praesidium Libertatis, translates as ‘bastion of liberty’, invoking the school’s legacy as the first Dutch university to practice the freedom of religion and belief. The sentiment behind this motto is reflected by several core values:

Academic prerequisites at Leiden University vary from one program to the next and have differing requirements in concern to Dutch and English language capabilities, some of which require proficiency testing. Non-EU residents also need residency permits, and possibly visas, in order to study at the school.

Tuition for Dutch, EU, EEA and Surinamese students, studying for a first bachelor’s degree or a master’s, is EUR 1,771 for the 2012/2013 school year. For all other students, tuition ranges from EUR 10,500 to EUR 13,300, depending on major. Master program fees for international students range from EUR 9,750 to EUR 22,200 and are again dependent on major.

Leiden University estimates that the average student will require EUR 800 to EUR 950 a month to cover expenses like rent and food. Foreign students will need to prove they can cover these costs when applying for residence permits. Though both European and international students are permitted to work while studying, restrictions and rules apply. Scholarships and grants may be available to help students with the cost of study. 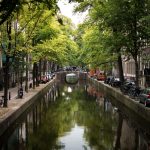