Getting offered a job overseas sounds like a huge breakthrough, but does it pay enough? Here’s all you need to know about salaries and the minimum wage in Spain.

Your finances can make a big impact on your quality of life. As such, if you plan to move to Spain to live and work, you should be aware of how much you can expect to earn.

If you’re unsure how much your salary should be in Spain, read on to learn about the following topics:

The minimum wage in Spain

The minimum wage (SMI, or Salario Mínimo Interprofesional) applies to all workers regardless of their age, gender, or employment contract in Spain. It includes casual, temporary, and domestic work.

The Spanish government adjusts the minimum wage each year based on a variety of factors, including national productivity and employment levels. The Ministry of Employment and Social Security sets the minimum wage in Spain at daily, monthly, and annual levels.

As a full-time worker with a minimum salary, you will generally receive €1,000 a month, payable in 14 installments to allow for the double monthly salary in July and December.

Learn about your worker rights with Spain’s labor laws

Spain provides secure legal protection for workers. As such, contracts, working hours, paid leave, and wages are just a few of the highly regulated areas of Spanish employment. Under Spain’s labor law, an employee’s salary can be monetary or in-kind, but the latter cannot be higher than 30% of the total amount of the salary.

Every worker in Spain is entitled to receive the minimum wage, including minors (at least 16 years old).  Many industries in Spain operate collective agreements. These cover minimum wages and workers’ rights within either a group of companies or the industry as a whole. If your employment falls under a collective agreement, you could benefit from a higher minimum salary.

A full-time workweek in Spain is 40 hours. For part-time workers, the Spanish minimum wage is half of the total value.

Domestic workers in households are employees. Employers of domestic workers must pay at least a pro-rata Spanish minimum wage per hour (if less than a full day) and follow the regulations of Spanish labor law.

General labor laws also apply, even if the working relationship lasts less than three months. In some cases, they may be able to claim a pro-rata payment for Sundays and Spanish public holidays, plus their minimum legal holiday entitlement for time worked, assuming that such holidays were not taken during the contract term.

Interns and apprentices in Spain

Students in Spain who have a contract as a trainee or apprentice are generally paid at least the national minimum wage. One exception is in the case of certain apprenticeship contracts. In some instances, the apprentice receives a grant of up to a maximum of €300, while the company receives allowances for taking responsibility for training the student.

These contracts are typically for between one and three years. Above all, the salary should always be proportional to the hours that the student works.

Spain has a lower cost of living than many other western European countries. However, expenses can vary depending on where you live. For example, if you move to Barcelona or Madrid you can expect to pay much more for renting or buying a home than in smaller, less expensive towns.

Looking for a new job? Learn more about employment in Spain

As such, you should ensure that the minimum wage provides you with an acceptable standard of living and complies with Spanish labor laws before you sign a work contract. You can use a salary calculator to verify this.

If you’re not earning at least the minimum wage in Spain you can complain to the Labor Inspectorate, who will assess your case. The Spanish authorities can fine employers who fail to adhere to Spain’s minimum wage regulations.

The Spanish Salary Guarantee Fund (Fondo de Garantí­a Salarial, FOGASA) works with the Spanish Ministry of Labour (Ministerio de Trabajo) to guarantee the compensation of unpaid workers’ salaries as a result of their employer going insolvent, ceasing payments, going into liquidation or entering into composition with creditors.

Another protection for workers within Spain’s labor laws is the right to strike. Strikes against a single company can be organized by trade unions, elected representatives (work councils, employee delegates), or the employees themselves. However, only trade unions can officially call strikes affecting an entire sector.

The average salary in Spain

The mean annual earnings for a full-time worker in Spain are €29,994, which is lower than many other western European countries. However, Spain also has a lower cost of living than most of its western European neighbors. A full-time worker may take 22 working days (30 calendar days) of paid holiday time annually. Furthermore, Spain has ten national public holidays in 2022 and two to three times as many at the local and regional levels.

Read more about the cost of living in Spain

Your employer will deduct your contributions to the state social security system from your salary. By paying into the system, you will be able to access public healthcare, 16 weeks of maternity and paternity leave, paid sick leave, state pension, and unemployment.

Your payslip in Spain should clearly state the name of the company and worker, salary, and deductions (including the worker’s social security contributions and IRPF (Impuesto sobre la renta de las personas físicas) or personal income tax deductions. The amount deducted for IRPF depends on pay and personal and family circumstances (children and people dependent on the worker). Workers must provide the required information to their employers to properly calculate the corresponding deduction.

Average salary in Spain by sector

Many minimum-wage workers in Spain are in the service sector. In 2022, a restaurant server in Spain typically earns from €510 per month (minimum salary) to €1,610 per month (maximum salary). The salaries vary based on experience level and the number of hours that they work.

At an industry level, companies within the banking and investment sectors, as well as insurance, pay the highest salaries. The jobs with the highest annual salaries in Spain are:

The average salary in Spain by job level

Here is a quick summary of average salaries for different job levels, according to Paylab:

If you’re moving to Spain for work, you can secure a higher salary by making sure your academic qualifications are recognized. You could also take advantage of opportunities to upskill with job training programs.

Average salary in Spain by region

Workers in Madrid earn the highest monthly salaries (€2,077 on average per month). The second and third best-paid regions are Basque (€2,051 on average) and Navarre (€1,883 on average). The lowest monthly salary belongs to the Canary Islands, where workers earn an average of €1,416 per month.

You can use a salary checker to see what your profession will likely pay in Spain. Here are a couple of online platforms to help you:

Spain ranks in the top 20 on the World Economic Forum’s global gender gap index. It also is the sixth-best EU country on the Gender Equality index with high marks when it comes to finances. That said, Spain still has a large pay gap between men and women. In fact, while men working full-time earned an average of €28,127 annually, women had annual average salaries of €25,243. The gender pay gap is higher in the private sector than in the public sector.

To improve gender equality in the workplace, companies with 50 or more workers must create and implement an equality plan, as of 2021.

They must include a salary audit in the plan and make it publicly available. For companies with 50 or more employees, if one gender earns at least 25% higher than the other gender, the employer must justify that those salary differences are not based on discrimination.

Salaries and wages for expats in Spain

Find a job in Spain with our expat job board

According to the Instituto Nacional de Estadística (Spain’s national statistical agency), Morocco is the largest single origin country for immigrants to Spain. In 2021, 60,324 people migrated from the North African country to Spain. The second largest group is Colombians (42,573 newcomers), followed by the British (34,510) and the Argentinians (32,877).

English teaching positions, especially during seasonal periods, are common among expats moving to Spain. According to Glassdoor, you can expect to earn around €15 per hour for this work. This is double the minimum wage in Spain.

Other popular work industries for expat workers include tourism, IT, engineering, finance, and healthcare.

What to do if your salary is too low in Spain

If you are the victim of sex-based pay discrimination (or other kinds of discrimination) in Spain, you are entitled to claim and receive compensation and/or some other form of reparation. In this case, the complaint will likely be taken up by a specialized labor and employment court. Generally, before the labor courts will hear a case, the two sides must try to resolve the issue. The national public Mediation, Conciliation and Arbitration Services (Servicios de Mediación, Arbitraje y Conciliación – SMAC) or a regional equivalent provide conciliation services. 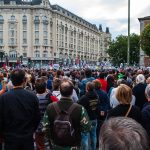