10 things I find weird about Germany

There are certain idiosyncrasies in this lovely, and somewhat strange, country to get used to, says South African expat Charlotte Otter.

There are some things you may not know about this lovely, and somewhat strange, country where I live. Germany is a land to discover – and abide by – certain local German customs.

1. Fresh air coming in through a window or door is toxic

Many of us might welcome a breeze in a hot, non-air-conditioned office. But here in Germany, a draught can lead to unhealth. You will hear es zieht (literally ‘it pulls’), which means all windows must be closed and that dangerously fresh air must be kept where it belongs: outside. Fresh air is also lethal when combined with wetness. If, for instance, you’re at the pool on a very hot day, it’s essential to be completely dry before leaving for home. If you aren’t, you never know when one of those terribly dangerous breezes might combine with your own wetness to track you down and knock you into your sick bed for days.

Confusing, no? Let me tell you how. If you’re at the bakery and the person behind the counter asks you if you would like your bread sliced, make sure you say bitte (please) or ja. If you go the overly polite Anglo-American route of saying ‘thanks’, your bread will be handed to you, nicely wrapped, but whole.

It may be 35 degrees and a heatwave outside but being barefoot leaves you open to a multitude of unnamed dangers. We moved back to Germany in the hot summer of 2003 and one evening took our two little girls for a walk in their respective prams. It was about 37 degrees in the shade and their feet were at no point going to touch the ground, but our friends looked upon us in shock, saying, “What? No shoes?” Also, in the winter, if you are home, it is essential to always have clad feet, despite a heated house. If you don’t, you are welcoming pneumonia, at best.

4. People of all ages suffer from bad circulation

Kreislauf or the failure thereof may not actually kill you, but it may force you to call in sick and spend a few days lurking on the sofa watching DVDs. It is not something only old people get, but is a lovely umbrella term that covers all sorts of problems: need for a mental health day, a hangover, or avoiding that work deadline. What in England would be called pulling a sickie, is here a medically acceptable self-diagnosis.

5. If you want to pull a sickie, have used kreislauf once too often, turn to that great source of sick notes: your doctor

I discovered that, when my job was boring me to tears (often) I could go to my GP, mention tiredness, headache, perhaps mutter, “Stress,” and my GP would give me a sick note for three days. Fabulous. I injured my left wrist falling off my bike once. I got two weeks off work. During that time, I spent that time on the sofa watching Wimbledon and nursing my debilitating sprain.

6. People say exactly what they think

This I have come to find refreshing, but it has taken a lot of getting used to. No need for that Anglo-American overly polite white-lie telling that oils the social wheel. No, they’ll ask if you’re pregnant when you’re still not showing. They’ll tell you your children aren’t dressed properly for winter. Also, the weeds in your garden are too high. In the street, you will be asked why one of your children screamed all night. Daisy’s first summer here was a difficult one for her: it was hot, she was nearly two, she wouldn’t sleep and she screamed a lot. One of my neighbors gave me a child-raising book, saying it would help me work out what I must do.

7. Tats and tans are the summer accessory of choice (winter, too)

I have mentioned these before, but still can’t come to terms with them. All I want to say is that the best way to accessorize your orange tan is with butt antlers. It’s apparently the only way to go.

I’ve gone native on this one. It suits me to cook a hot meal for my kids at lunch. In the evening, when I have no energy, I can slap a yoghurt or a bowl of cereal down in front of them. However, the weirdness comes in that the whole society is predicated on the home-cooked lunch. Work canteens provide the same for the poor souls who can’t get home for their meal. In our town, most shops close for the two-hour lunch period. It’s one of those unwritten rules on which Germany is based, without which the fabric of society would be rent.

Speaking of rules, there are lots here. It’s evidence of how eingedeutscht I have become that I no longer find any of these really strange: no washing cars or mowing lawns on Sundays, no playing at playgrounds between the hours of 1–3pm, no shopping on Sundays, no disturbing the neighbors after 9pm, no barking dogs (dogs here are strangely silent) especially after 9pm or between 1–3pm or before 9am. Friends of ours arrived here with three unruly barking dogs. They soon received letters from municipal officials asking them to keep their dogs silent during quiet hours. They wrote back to say they had informed the dogs. Now they live in the country and their dogs bark when and how they please.

10. Work and play are separated

Another weirdness I’ve grown used to. Back in South Africa, you had to be best friends with someone and preferably had got drunk together the night before, before you could ask them to do something for you at work. Here the opposite is true: you barely even need to know their names, and you certainly don’t care about the health of their children or their elderly parents. When visitors are in town for work, it’is always the expats who make the effort to take them out; the Germans tend to melt into the shadows at 6pm. Work is work, play is play, and the twain should never meet. 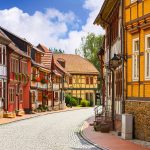