Home Moving to the Netherlands Where to Live Where to live near Amsterdam
Last update on July 16, 2020

Moving to the Netherlands? Escape the bustle of the capital and relocate somewhere a little quieter with our guide on where to live near Amsterdam.

Generally speaking, living in the cities close to Amsterdam is much cheaper, thanks to more affordable rents and lower day-to-day costs. With more land available, homes are also bigger in these areas. This can be great for families with young children who are looking for more space and a garden.

Excellent transport links make it easy to commute from the cities close to Amsterdam, whether by bus, train, tram, or metro. Thanks to an excellent cycle network, it’s also possible to make the journey by bike – weather permitting, of course.

To help you decide where to live near Amsterdam, here’s our complete guide from A to Z – that’s Almere to Zaandam.

Close to Amsterdam, Almere is one of the newest cities in the Netherlands. It was built during the 1970s and 1980s on Flevoland, an entire island province reclaimed from the sea. This gives Almere a more modern feel than other places on this list. It has well-planned neighborhoods and lots of spacious, family-friendly housing.

The city is popular with expats seeking a more laid-back lifestyle. It has plenty of green spaces, as well as easy access to the nearby Markermeer lake. The city is well-stocked with shops, restaurants, and international schools. However, cultural and entertainment offerings in Almere generally cater for families.

Almere is a 20-minute train journey from Amsterdam Centraal, putting it within easy commuting reach. This distance is reflected in Almere’s rental prices, which are generally more affordable than most other locations within the wider Amsterdam area.

South of Amsterdam sits the up-and-coming city of Amstelveen. Close to Amsterdam and Schiphol Airport has made Amstelveen a popular city with local families, international arrivals, and multi-national companies alike. These include Canon and Ricoh, who have offices in the city.

Many see Amstelveen as one of the main expat cities close to Amsterdam. It has large Japanese and Indian communities which give the city a lively international feel. Unsurprisingly, the city has an excellent selection of international restaurants, grocery stores, and schools – including the reputed International School of Amsterdam. It’s also home to some great days out, including the Cherry Blossom festival and the Netherland’s largest Diwali celebration.

Amstelveen’s growing popularity has seen a steady rise in property prices in the city. However, it remains more affordable than much of Amsterdam. This makes it a great option for expat families, as well as international students studying at the nearby Vrije Universiteit.

Thanks to its location, Diemen is incredibly well-connected to the wider Amsterdam area. Direct train services to Amsterdam Centraal take just 11 minutes. In addition, metro and bus lines offer easy access to the nearby Zuidas and Bijlmer business districts, where many multinational companies are located.

Read our guide to renting in the Netherlands

Amsterdam largely overshadows the limited cultural life that exists in Diemen. That said, there are plenty of family-friendly options in the area. There are also a whole host of expansive green spaces for those who enjoy the great outdoors, including the massive Banjerbossie forest.

Although an important city in its own right, Haarlem is also a great option for expats looking for somewhere more lively while still being close to Amsterdam. The city has a well-established expat community and is conveniently located halfway between Amsterdam and the beach.

The city center’s picturesque lanes are home to well-known retailers, cozy cafés, and international eateries. There are also plenty of options for families, including cinemas, swimming pools and, of course, the nearby seaside attractions at Zandvoort.

Haarlem is just a 15-minute train ride from Amsterdam Centraal. This makes central Haarlem popular with commuters, pushing up property prices. However, the city’s residential neighborhoods often provide more affordable – and larger – homes. For more information, check out our guide on where to live in Haarlem.

Located next to Schiphol Airport is the residential town of Hoofddorp. Established in the mid-19th century on the site of the drained Harlemmermeer lake, Hoofddorp is now a largely residential town with plenty of green spaces that is popular with young families.

Amsterdam Centraal is just a 25-minute train ride away, while further connections exist to Haarlem, Zuidas, and, of course, Schiphol. Authorities also have plans to extend Amsterdam’s metro system to Hoofddorp in the next decade; this would significantly improve transport links.

Hoofddorp’s proximity to Schiphol has helped keep property prices relatively low (even though the tranquil suburb is only on the airport’s flight paths on windy days). This makes it a good option for expat families looking to get more bang for their buck, while still staying close to Amsterdam.

The northern-most spot on our list is the quiet town of Purmerend. Although near the popular tourist towns of Volendam and Edam, the largely residential town of Purmerend is a great option for expat families looking for one of the quieter cities close to Amsterdam.

Purmerend is popular with commuters working in the capital, with Amsterdam Centraal just half an hour away by train. Generally speaking, it’s also significantly more affordable than the other options on this list. This makes it popular with families looking for larger, cheaper homes.

Things to do in Purmerend are generally limited to family-oriented activities and outdoor pursuits. However, expats moving to the town hope to see that change as the current wave of development shapes Purmerend’s future.

The picturesque town of Zaandam might be just a 12-minute train ride from Amsterdam Centraal, but at times it feels like it isn’t one of the many cities close to Amsterdam. With twee streets and a small-town feel, it’s easy to see why the town is becoming increasingly popular with commuters moving out of the city.

Despite its proximity to Amsterdam, property prices are still relatively low in Zaandam, meaning there’s something for every price bracket. Prices vary significantly between neighborhoods, though, so it’s best to do some research ahead of time.

Entertainment options in Zaandam are limited. However, there’s a clutch of shops and restaurants in the center alongside plenty of activities to keep most families occupied. Zaandam also has a surprisingly rich cultural offering, including a Claude Monet museum and the iconic Inntel hotel.

Other cities close to Amsterdam

We’ve taken a look at some of the more popular options for expats looking to live in the cities close to Amsterdam. However, it doesn’t end there. Thanks to strong public transport connections, it’s possible to live even further afield and still commute into Amsterdam.

For more information, visit our where to live in the Netherlands section. 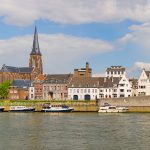