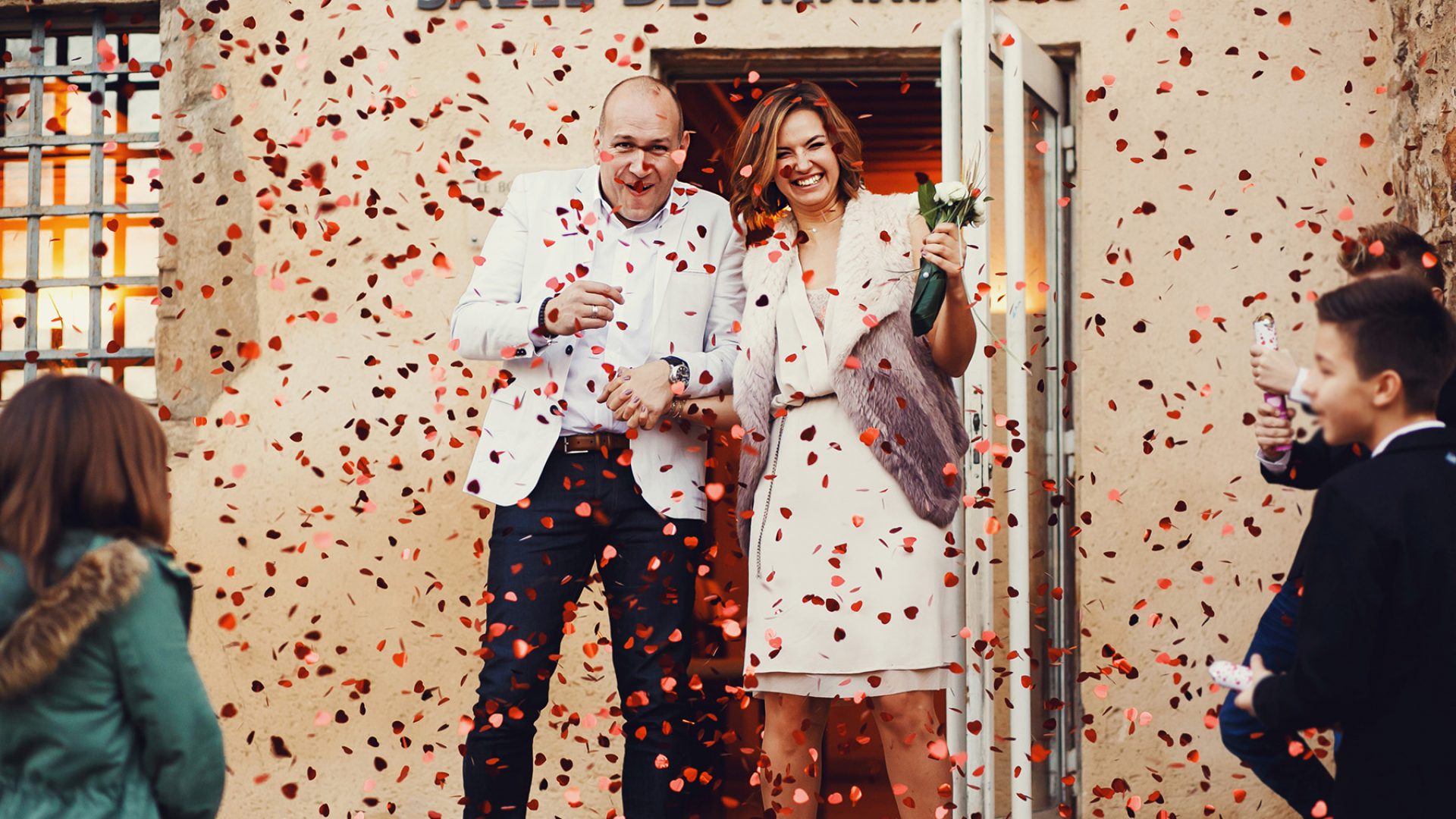 Home Living in France Love, Marriage & Partnership French weddings: a guide to getting married in France
Last update on 02/07/2022
Share

If you are planning to get married in France, this guide explains the paperwork and processes for arranging a French wedding.

If you’re already picturing getting married in France in a country church or a French vineyard, you’ll need to prepare in advance for the inevitable paperwork of a French wedding. It can also be difficult to marry in France if you don’t have ties to the country. Check all of the requirements for a French wedding.

Getting married in France

Getting legally married in France is only possible through a civil ceremony which takes place at the council offices (mairie). The couple can then follow this with a religious ceremony, a secular service, or whatever celebration they choose, in a destination of their choice.

This is the case for both heterosexual and same-sex couples. Same-sex marriage became legal in France in 2013. The procedures are nearly identical to those for a heterosexual marriage. Both are marriages (mariage).

Citizens of 11 countries (Algeria, Bosnia and Herzegovina, Cambodia, Kosovo, Laos, Morocco, Montenegro, Poland, Serbia, Slovenia, and Tunisia) cannot enter into a same-sex marriage in France. This is due to pre-existing treaties which mean that citizens of these countries must abide by certain of their own laws while in France. At the time of writing, in 2014, various challenges were underway but success is not in sight.

The civil ceremony at the mairie must be in a commune that you or your future spouse have links with. For example, one where one or both of you live, or where one of your parents live. Find the address and other details of your local mairie online. Most mairies are so small they only have one receptionist (many have quirky opening hours as a result); simply saying you want to marry is enough to start procedures. In larger towns, you can ask for the office des mariages (office of marriages) although this may cause some confusion if they don’t have a separate department.

You must apply together to the mairie in question, and prove that you are are both free to wed. This may include a face-to-face interview, either together or separately. The mairie will then publish the bans for a fixed period. This is a formality where you publicly announce your intent to marry, to allow anyone with knowledge of a legal impediment time to notify the registrar.

This process typically takes at least four weeks, longer if one or both of you are not French. You may have a limited choice as to which day you can get married. Be flexible.

You must be over 18 and not in a marriage already.

Many people stage their wedding in France. However, the paperwork to arrange a civil wedding while out of the country is complex. Non-residents without a parent living in France must acquire a special dispensation before getting married in the country. In practice, authorities rarely allow it. Many couples prefer to have a civil wedding in their country of origin or residence, and hold a second ceremony in France.

Conversely, couples who are residents in France may find it easier to hold the civil ceremony in France and then celebrate abroad.

Documentation for getting married in France

Expect to have to provide:

Medical certificates are no longer necessary.

If you are not French, you may require a Certificat de Coutume from your embassy. This ensures that your marriage will be equally valid in France and in your home country.

A translation is typically necessary for any documents not in French. Foreign documents may have to be authorized with an Apostille stamp or equivalent, also known as ‘Apostillisation’ or ‘legalisation’. The issuing authority stamps a document with a unique ID, indicating that it is a true and accurate copy.

The ceremony must take place at the mairie, in a room open to the public, no less than 10 days, and no more than one year after authorization. If you wait more than three months, you may have to supply new copies of your birth certificates. The mayor (maire) or their representative will preside over the ceremony.

The ceremony will be in French. If either of you are not fluent in French, you should have a translator present. They do not usually need to be a professional or certified translator.

In France, a prenuptial agreement (contrat de mariage) is only valid if the couple arranges it before the wedding. You must present a certificate from a public notary who has witnessed the contract when you apply to the mairie.

A prenuptial agreement alters the standard form of inheritance, joint ownership of property, and mutual responsibility within the confines of French law. It is common where there are children from previous relationships, other dependants, where one or both spouses own a business, or where there is significant wealth. Consult a legal professional for advice on your particular situation.

Unmarried couples (same-sex or heterosexual) may create a Pacs (pacte civil de solidarité), a legally binding document that arranges certain aspects of their life. This is not an impediment to marriage, nor is it a prenuptual agreement. Marriage dissolves this.

After the ceremony, you receive a family record document (livret de famille) unless you already have one. This is an ongoing record of all elements relating to the marriage (e.g., births, adoptions, deaths, divorce) and includes a copy of your marriage certificate (l’acte de mariage). If you require a separate or additional copy of the certificate, you must request this separately.

By default, both spouses keep their own name. Each may add the other’s name to theirs at this time for no charge, or a woman may replace her name with her husband’s. Either or both may go through the process to legally change their name. Guide to dating in France