Home Moving to Switzerland Where to Live The cheapest places to live in Switzerland
Last update on March 28, 2022 We share the cheapest places to live in Switzerland for expats looking to live the good life in the most expensive country in the world.

It’s no secret that Switzerland is the most expensive country in the world to call home. Furthermore, according to the 2020 Worldwide Cost of Living report, three of its main cities – Geneva, Zurich, and Bern – ranked within the top 10 most expensive cities in 2020. Despite this, however, there are many affordable places to live throughout the beautiful alpine nation. In fact, there are several great options for expats looking for the cheapest places to live in Switzerland. That said, this does depend on your lifestyle.

Generally speaking, the more affordable places to live in Switzerland are often quite rural. These locations can also be somewhat more expat-unfriendly than the country’s major cities. Nevertheless, if you are moving to Switzerland and your work is relatively location-independent, you might consider these areas. Many of them also offer a very high quality of life, affordable housing, cheap public transport, low tax rates, and even inexpensive childcare and health insurance. These are all factors that Credit Suisse Bank takes into account in its cost of living in Switzerland study.

Read more about the cost of living in Switzerland

The most recent survey found that for families, the cheapest places to live in Switzerland are the cantons of Valais, Jura, and Fribourg. This is due to the fact that these cantons make plenty of allowances, subsidies, and tax deductions for families and childcare. Commuter hubs such as Uri, Glarus, and Graubünden also offer plenty of other tax breaks alongside affordable housing and transport. To give you an idea of the more affordable options, here is an overview of the cheapest places to live in Switzerland.

The canton of Uri is consistently making the cut as the cheapest place to live in Switzerland. Its comparatively cheap property costs are, of course, a big draw. However, the canton also offers relatively low tax rates. For example, there is no upper limit for tax deductions for the cost of childcare. Commuters can also enjoy unlimited tax deductions.

And while health insurance can be expensive in Switzerland, you can enjoy low insurance premiums in Uri. The country-wide hike levied in 2017 amounted to less than 3% in the canton. This German-speaking canton is one of Switzerland’s oldest and enjoys a low unemployment rate; this was just 1% in 2018. That said, there isn’t that much to do here and there aren’t that many expats. In 2016, for instance, there were only 4,295 foreign residents in the canton.

Like Uri, Glarus enjoys many of the same financial benefits of lower-cost housing and modest tax rates. As a result, it is also often named the cheapest place to live in Switzerland. Because of its relative affordability, apartment rentals here are around CHF 1,500 to CHF 3,000/month. And, if you want to buy, you can expect to spend around CHF 300,000 to CHF 800,000 on an apartment or CHF 400,000 to CHF 900,000 on a house. However, utilities for an 85-square-meter apartment are, on average, about CHF 150.

Similarly, a three-course meal for two will set you back around CHF110. Because of this, the cost of living may be slightly higher than other “cheap” places to live in the country. This is somewhat mitigated, however, by the fact that Glarus residents have a relatively higher freely disposable income value and enjoy tax benefits.

Unlike Uri, though, the canton of Glarus has plenty of economic opportunities. As such, many leading companies in the fields of mechanical and electric engineering, construction, and food and environmental technology are located in the area. Furthermore, the canton’s location in the heart of Switzerland means that residents of Glarus can easily get to Zurich and its international airport. Its relatively young population, of which around 25% are foreign-born, also makes it a more expat-friendly option.

Located in the east of the country, Appenzell Innerrhoden may just be the cheapest place to live in Switzerland. Residents of this small canton are said to enjoy the highest levels of post-tax disposable income. As such, you can expect low real estate prices. In fact, a house costs around CHF 780,000 to CHF 1,306,000 to buy. Meanwhile, an apartment rental costs, on average, CHF 1,100 to CHF 2,552/month. Additionally, low tax rates, social security payments, and compulsory health insurance mean that residents keep more of their income.

Although it is a very picturesque area, Appenzell Innerrhoden is very rural. So while residents of the canton enjoy hiking the verdant Alpine hills and twee villages, it’s not exactly an economic powerhouse. And, with a foreign population that amounts to about only 10%, it’s not the best choice for expats, either. That said, if you are able to work remotely and love spending time in the great outdoors, then it might be an appealing option.

When it comes to the cheapest places to live in Switzerland, Obwalden is another great option. That said, the cost of living will depend on exactly where you live in this economically diverse canton. For example, residing in rural villages such as Lungern and Giswil is more affordable than in the historic center of Sarnen or Kerns. House prices reflect the economic realities of Obwalden, too. As such, you might expect to pay between CHF 370,500 and CHF 3,302,000 for a house or CHF 1,100 to CHF 2,946 on renting an apartment.

Nevertheless, you’ll enjoy some of the lowest taxes in Europe. Indeed, these were slashed in 2007, which might balance things out. Furthermore, thanks to a well-developed network of roads and railways, you’ll be within easy reach of major centers like Zurich and Lucerne.

Discover the 10 best places to visit in Switzerland

Not to mention you’ll get to enjoy all the breathtaking scenery the canton has to offer, coupled with an unbeatable quality of life. It’s also an especially attractive proposition for German-speaking students since the University of Lucerne is easily accessible. There are plenty of technical colleges to choose from too.

A plethora of advantages come together to make Neuchâtel a top choice for expats looking to settle in Switzerland. However, only some of them make it a contender for the cheapest place to live in Switzerland. For instance, residents can benefit from affordable health insurance and a tax deduction of up to CHF 19,000 for childcare. Salaries are nothing to sneeze at either, with the average hovering around CHF 6,200/month. As for housing, a city-center three-bedroom apartment costs around CHF 1,886/month to rent and CHF 350,000 to CHF 2,800,000 to buy. In addition, you’ll pay just CHF 65 for a monthly transport pass, and perhaps CHF 100 for a three-course meal for two. And people say you can’t find a good deal in Switzerland!

Neuchâtel is also an attractive proposition for other reasons. A charmingly classic Swiss canton, it boasts many cultural and commercial attributes. These include UNESCO-listed sites, museums, schools, twee towns, and thrilling outdoor activities. The canton is also home to numerous major brands, including Rolex, Breitling, Kiko Milano, Bata, and Zara, as well as major universities, so there are opportunities to find work. It’s also expat-friendly, with around 25% of the population being foreign-born.

You might not have even heard of the canton of Thurgau, but it regularly crops up as the cheapest place to live in Switzerland. Located in the country’s northeast, near the German border, it boasts an admirable Alpine climate as well as vineyards, hills, picturesque villages, and charming timbered housing. In fact, the capital of Frauenfeld is surprisingly affordable. As such, you can buy an apartment for around CHF 410,000. Nicer properties in the city center, on the other hand, will cost up to CHF 1,223,6000. If you’re renting, however, you might only pay CHF 950 to CHF 1,050/month for an apartment.

Although salaries here are comparatively low – around CHF 5,000 on average – the cost of living is also quite low. Because of this, you can expect to pay around CHF 138/month for utilities, CHF 100/month for public transport, and CHF 100 for a three-course meal for two at a nice restaurant.

A surprisingly attractive contender for the cheapest place to live in Switzerland, the French-speaking canton of Jura has plenty going for it. Property is, of course, cheap. However, the tax breaks are great, which makes it highly appealing for startups and those looking to invest. The cost of living is practically negligible. As such, you can expect to pay as little as CHF 510/month to rent an apartment (although this can go up to CHF 1,800), along with CHF 123/month for utilities.

There aren’t too many expats, however, with only around 15%. That said, if you do decide to live here, then you’ll be less than three hours away from the hubs of Basel and Paris when you need a break. The capital of the canton, Delémont, is positively resplendent in its medieval architecture. Elsewhere, you’ll get to bask in some of the most exquisite forests and hiking trails in the country.

Home to the Matterhorn, chi-chi ski resorts, and the Rhône Valley vineyards, the canton of Valais has plenty to offer expats seeking adventure. And that’s even before you get to the affordability that makes this a strong contender for the cheapest place to live in Switzerland. Tax breaks are, of course, very attractive. These include a CHF 3,000 minimum tax deduction for childcare and an unlimited tax break for commuters. Health insurance is also very affordable, and rates were raised less than 5% in 2017.

The most expensive area in the canton is its capital, Sion, but even this is incredibly affordable compared to the rest of the country. As such, you can rent a city-center apartment for approximately CHF 1,787, get a monthly transport pass for CHF 100, and indulge in a three-course meal for two for just CHF 93. Not only that, but you’ll also get to enjoy the magnificent Swiss Alps, a healthy tourism industry, and a bustling economy dedicated to the service industry, environmentally-friendly energy, and agriculture. 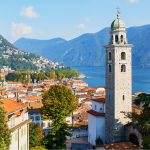 Living in Geneva: the best neighborhoods for expats