Top 10 places to visit in Switzerland

Home Lifestyle Things to Do Top 10 places to visit in Switzerland
Last update on January 12, 2022 Ready to explore majestic Switzerland? Whether you’re visiting or relocating, don’t miss our top 10 places to visit in Switzerland.

Switzerland may be small but it has a whole host of great places to visit. From breathtaking mountain peaks to dreamy turquoise lakes and a countryside littered with ancient wonders, Switzerland really does have something for everyone.

In fact, there’s so much packed into Switzerland’s borders that expats and visitors alike will find it difficult to decide where to visit next. But fear not! With our guide to the top 10 places to visit in Switzerland, you’ll soon be exploring the stunning beauty of this unforgettable Alpine gem.

Do you know your guten tags from your bonjours? Get more out of your Swiss adventure by brushing up on the local lingos with language-learning app Babbel. Whether you want to learn French, German, or Italian, their professionally-made courses can help get your there. Download Babbel today and travel with confidence.

This pyramid-shaped giant is one of the world’s most photographed mountains, which means it’s definitely a top place to visit in Switzerland. Standing at an impressive 4,478 meters, thrill-seeking mountaineers from around the globe descend on Switzerland to attempt the summit. If you’re not feeling quite so energetic, why not stick to the cable car? The mountain is home to the highest cable car station in the Alps, which offers some excellent views of the mountain peak and beyond. It really doesn’t get much more Swiss than a trip to the Matterhorn.

No trip to the Swiss Riviera is complete without checking out the medieval Château de Chillon. Located on an island in Lake Geneva near the popular town of Montreux, the castle dates back to the 10th century, when it was used as a strategic water fort. It then became a lakeside summer home for the wealthy Counts of Savoy, when the castle rooms were decked out with all manner of art and treasures visitors can enjoy today. The castle is Switzerland’s most-visited historical monument and is definitely a must-see while you’re exploring the country.

The Jungfraujoch is an Alpine wonderland that fully deserves its nickname of the Top of Europe. Technically a glacier saddle between two mountains, the Jungfraujoch is one the best – and highest – attractions in Switzerland. And don’t let the altitude put you off – there’s plenty for the whole family up there, from mountain climbing to tobogganing and much more. However, perhaps the most impressive attraction is the world-famous Jungfrau railway. Starting at Kleine Scheidegg, the train climbs up to 3,454 meters above sea level to Jungfraujoch, the highest railway station in Europe.

In a country with amazing scenery at every turn, it can be hard to know where to go. But one thing for certain is that you’ll want to visit the Swiss National Par near Zernez. As the country’s only national park, it’ll give you an idea of how the Alps were before tourism. From snow-crusted glaciers to captivating meadows, this place has it all. There are plenty of hiking trails to choose from, each taking visitors past unforgettable sights. And, if you’re lucky you might catch sight of some of the park’s local residents – red squirrels, ibexes, and red deer all call this park home.

Stretching from Geneva in the west to Lausanne in the east, Lake Geneva is one of Switzerland’s most beautiful places. From the international bustle of Geneva to the many vineyards that crawl up the hillsides around the lake, there’s plenty to do in the surrounding region. And there’s a lot of activity on the lake, too. Windsurfing, water skiing, and kayaking are all possible for more active visitors to the area. Or, if you’re feeling a little lazier, you can simply sit back and take in the beauty of the lake from the deck of a paddle steamer as it crosses the water.

See Switzerland in a whole new light with a trip to the southern city of Lugano. Nestled on the shores of the breathtaking Lake Lugano, the city dubbed the Monte Carlo of Switzerland blends Swiss and Italian cultures into an unforgettable weekend break. Home to plenty of museums and warmed by Mediterranean breezes, you might even think you’re in nearby Italy when you visit. Outside the city, impressive villas are sprinkled around the lush hillsides that rise from the lake.

Not only is the medieval city of Bern Switzerland’s capital, but it’s also one of its most enchanting places to visit. Walk around the old town’s narrow cobblestone stones and you’ll soon realize just why the neighborhood is listed as a UNESCO World Heritage Site. All across Bern’s historic center, you’ll find a whole host of boutiques, bars, and bears. Yes, that’s right, a family of bears – the city’s symbol – lives at the city’s aptly named Bear Park just across the river from the old town. If that wasn’t enough, the city hosts plenty of lively markets, including some memorable Christmas markets during Advent.

In a country of picture-perfect lakeside cities, it doesn’t get much more impressive than Lucerne. Surrounded by three large mountains, the compact medieval city sits on the shores of Lake Lucerne. Wandering around the captivating old town, you’ll be forgiven for thinking you’ve stepped into a painting. There are ancient churches, bustling squares, and plenty of boutiques to explore as you marvel at the architectural wonder of the city. But the highlight is the Chapel Bridge, a covered wooden bridge that has been connecting the center of Lucerne since 1333.

As Europe’s most powerful waterfall, it’s easy to see why Rhine Falls is one of the top things to do in Switzerland. Visitors can take in the beauty of the waterfall – located near the northern town of Schaffhausen – from several viewing decks. If you’re feeling more adventurous, you can even rent a canoe and check out some nearby castles from the water. Every August, the falls host a spectacular firework display that attracts visitors from around the country as part of Switzerland’s National Day celebrations.

And last but not least, no list of the top things to do in Switzerland would be complete without mentioning Zurich. The largest Swiss city, Zurich is also the social and cultural hub of the country. In fact, despite its world-renowned financial offerings, Zurich has a surprisingly bustling social scene. From the popular Pride parade to Europe’s largest street rave, there’s a lot going on. And, if all that wasn’t enough, the city’s pretty easy on the eye – from the charming streets of the old town to the stunning scenery of Lake Zurich. 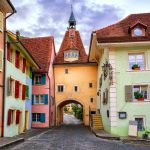