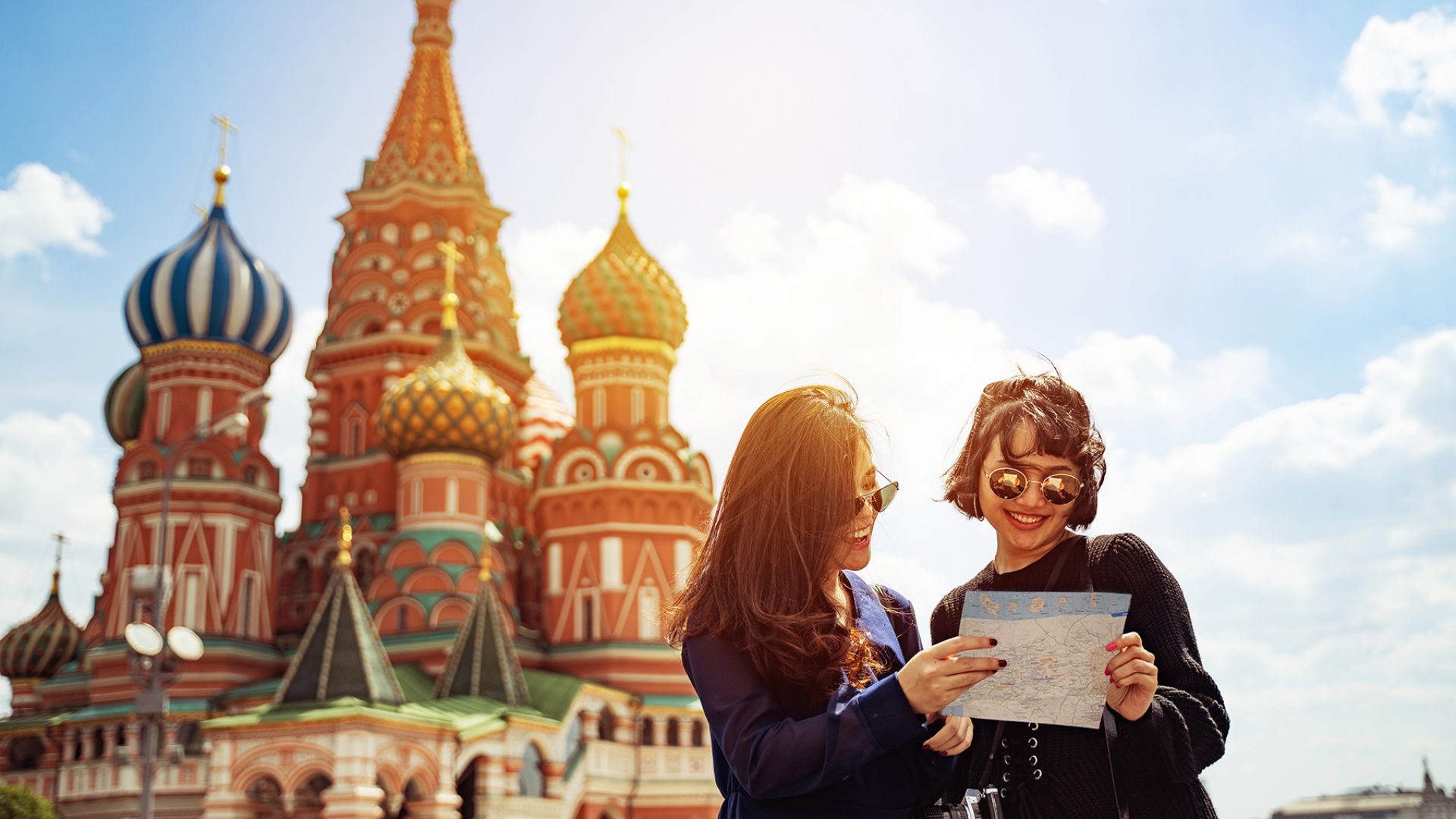 We take a look at the Russian language, from its origins in medieval Eastern Europe to its fascinating grammatical structure.

The Russian language, as beautiful as Russia itself, is the medium in which some of history’s greatest writers and orators have crafted their works. Today, it is one of six languages with official status at the United Nations and is spoken by 258 million people.

Learning Russian will of course help you integrate. But it will also enable you to gain a deeper understanding of Russia’s unique history and culture. Our guide to the Russian language aims to furnish you with some key information on its origins and modern-day usage, including:

What languages do people speak in Russia?

Russia is a vast and diverse country and is home to over a hundred languages. However, Russian is the only official language nationwide. It is spoken by over 142 million out of 144 million Russian citizens. Of these, 119 million say it is their first language.

A further 35 minority languages are recognized as official in their regions of origin. The largest of these include Tatar (5,3 million speakers), Bashkir (1,38 million), and Chechen (1,33 million).

Russia is also home to significant foreign-born communities, largely originating from the former USSR. As a result, languages such as Ukrainian, Uzbek, Kazakh, Armenian, and Georgian are frequently heard in major cities.

Where the Russian language is spoken worldwide

Russian is an official language in four countries: Russia, Belarus, Kazakhstan, and Kyrgyzstan. Over 258 million people speak Russian worldwide, making it the eighth most-spoken language in the world. While over half of those speakers reside in Russia, large Russian-speaking communities can be found elsewhere too.

Russian is one of the two official languages of Belarus, along with Belarusian. In the 2019 census, 38.1% of Belarusians named Russian as their native language.

Although it is not an official language in Ukraine, the Ukrainian constitution explicitly recognizes Russian as a minority language. It is the native tongue of 22% of Ukrainians, while 29% say they predominantly speak Russian at home.

Like Belarus, Kazakhstan grants Russian the status of official language, and around 3.8 million Russian speakers live in the former Soviet republic.

There are no official statistics as to the exact size of the Russian-speaking community in Germany. However, Russian is the second most spoken language in the country, with the number of speakers estimated between 2.2 million and 3.5 million.

There is a sizeable Russian-speaking community in the United States – in 2016, over 900,000 Americans reported speaking predominantly Russian at home.

An estimated 1.3 million Israeli citizens speak Russian, making it the third most-spoken language in the country after Hebrew and Arabic.

In addition, there are also Russian speakers in Central Asia, the Caucasus, and the Baltic states.

Origins and history of the Russian language

Russian is a member of the East Slavic subgroup of the Slavic language family, along with Belarusian and Ukrainian. Like almost all European languages, it has its roots in the wider Indo-European family.

The roots of the language

Around 880, the territory of modern Ukraine, Belarus, and west Russia was unified into Kyivan Rus’, and the East Slavs, who had previously spoken in a variety of closely related dialects, established Old East Slavic as a common language for the region.

Russian began to differentiate itself as a language following the breakup of Kyivan Rus’ in approximately 1100. It became a distinct language in the 13th century. The development of Russian was strongly influenced by Church Slavonic, which remained the official literary language in Moscow until the late 17th century.

Reform of the language

Reforms introduced by Tsar Peter the Great (1682–1725) aimed to secularize the language and reverse the influence of Church Slavonic. As part of Peter’s reforms, he also introduced blocks of specialized vocabulary adopted from languages of Western Europe. However, up until the Napoleonic Wars in the early 19th century, the Russian aristocracy preferred to speak French, with Russian being predominantly the language of the common people. To this day the Russian language contains a large number of French loanwords, such as кошмар (koshmar, from cauchemar, “nightmare”) and тротуар (trotuar, from trottoir, “sidewalk”).

Read our introduction to Russian history

The great poet Alexander Pushkin revolutionized the written Russian language in the early 19th century. Pushkin rejected the archaic written grammar and vocabulary in favor of that used in the common vernacular of the time.

This made his work more accessible to his contemporaries. Russians revere Pushkin as the father of modern Russian, similar to how English speakers view Shakespeare, and his writing remains popular today.

A revolution in Russian

The most recent stage in the evolution of the Russian language came shortly after the Bolshevik Revolution, with the spelling reforms of 1918. Reforms introduced by the new Soviet government aimed to simplify Russian writing. Most notably, they dropped four letters from the alphabet. In addition, they abandoned the use of the Cyrillic hard sign (ъ) following consonants at the end of words. The latter change had the added effect of reducing the costs of typesetting and writing by about one-thirtieth.

The Russian language alphabet is a variation of Cyrillic script. It has 33 letters, including 20 consonants, 10 vowels, one semivowel («й», which is similar to the letter “y” in English), and two unvoiced modifiers, or “signs”. The latter alters the pronunciation of a preceding consonant and/or following vowel within a word.

Five letters of the Russian alphabet – three consonants («к», «м», and «т») and two vowels («а» and «о») – look similar or identical to their English equivalents. Others resemble letters in Latin script but are pronounced differently. These include «х» (pronounced “kh”) and «у» (“u”).

Word stress is very important in Russian and is one of the things that most distinguishes it from other languages. Every word has only one stressed vowel, pronounced distinctly, whereas Russian speakers shorten other vowels within the word. Normally, the second-to-last vowel within a word is stressed. However, this is not a universal rule.

Fortunately, once you get the hang of the alphabet and word stress, Russian is almost entirely phonetic, with just a handful of exceptions. For example, the letter «г», which is usually pronounced “g”, becomes an “h” sound when immediately followed by the letter «к».

In Russian, every noun is either masculine, feminine, or neuter. Verbs and adjectives have different endings based on gender, case, and singular/plural.

Unlike English and German, the Russian language has no formal word order. The subject, object(s), and so on are recognizable through case endings, rather than through their position within a sentence. Russian has six cases:

Although Russian has a verb “to be”, rarely used in the present tense. In addition, Russian has no articles. Thus, an English sentence like “I am a student” becomes “I student” in Russian.

Dialects of the Russian language

There is surprisingly little variation in how Russian is spoken, despite the size of the country. Regardless of their location, Russians tend to speak standard Russian, with only very minor regional variations. For example, in the northern territories of European Russia, people often stress multiple syllables within a word. This differs from standard Russian pronunciation.

There is more variation among other Russian-speaking peoples. Ukrainians, for example, tend to pronounce the Russian letter “g” as an “h” sound, which is also how the letter sounds in the Ukrainian language.

Chechens often pronounce the letter “v” as a “w”, as many native German speakers do when speaking English.

Many Russian-speaking Israelis speak a dialect called “Rusit”, which contains a large number of Hebrew loanwords and unique expressions not found in standard Russian.

Interesting facts about the Russian language

You are probably familiar with some Russian loanwords in English, such as vodka and tsar, but there are many others. For example, mammoth, balaclava, and tundra all derive from Russian.

For more fun trivia, read our list of 30 facts about Russia

Along with English, Russian is one of the official languages of space. Astronauts have to learn Russian as part of their training, and computers on the International Space Station use both English and Russian. Around 7.4% of all online content is in Russian.

The name Red Square (Красная Площадь, Krasnaya Ploshchad) has no connection with communism or the USSR. The word for “red” actually derives from an archaic Russian word meaning “beautiful”. There is also no single word for the color blue in the Russian language. Instead, it has numerous words for different shades of blue, the most common being голубой (goluboy, light blue) and синий (siniy, dark blue).

And, lastly, the word царь (tsar) derives from the Latin “Caesar”, which means hairy.

Learning the Russian language in Russia

If you are planning to move to Russia, learning Russian should be near the top of your to-do list. According to a 2019 poll, only 5% of Russians speak fluent English, so learning Russian will make it much easier to communicate.

Most jobs in Russia will require you to speak at least basic Russian. If you intend to seek Russian citizenship by naturalization, you will need to provide proof you can speak the language.

Fortunately, you have plenty of options.

If you thrive in a classroom environment, you could enroll in one of the many language schools dotted around the country.

Search our Directory for language schools in Russia

Alternatively, there are numerous smartphone apps and computer programs available to help you learn Russian, including:

Finally, you may want to seek out a language exchange partner – a Russian native speaker who will help you practice your Russian in exchange for helping them practice speaking your native language.