An expat’s guide to finding jobs in Paris, including how to find English-speaking vacancies in the City of Lights.

Looking for jobs in Paris? With its romantic backdrop, stunning cityscape, and fine-dining, the lure of the French capital is too much to resist for adventurous expats that dream of living in one of the world’s most happening capitals. There’s plenty to do in Paris during your free time, but how easy is it to get a job in Paris?

This guide will explain the opportunities for expats looking for work in Paris, together with useful tips on where to Paris jobs, legal requirements, and how to apply for English-speaking jobs in Paris with French recruitment agencies. The guide includes:

Due to the tentative economy throughout the European Union, jobs in Paris are harder to acquire for expats unless you have qualifications in specialist areas. In January of 2017, the unemployment rate for France was back up to around 10% after hitting a low of around 9%.

A contributing factor to the recent decline, however, is that new regulations mean companies have to pay higher taxes. This resulted in a high number of redundancies. Furthermore, the French economy has been stagnant as of late, making it harder to find work in Paris or any other French city. Not enough new jobs are being created.

On the upside, higher taxes mean the social security system is strong and in good working order. Therefore, if you are moving to Paris for work, you will reap the long-term benefits of your French pension.

It can be difficult to find permanent contract work in Paris, as flexible contracts seem to be more popular among employers. The minimum wage in France is €9.67 an hour, which, coupled with a 35-hour workweek, comes out at €1,466.62 a month. Unfortunately, employers aren’t likely to hire someone who needs a visa sponsorship unless they absolutely have to.

Who can work in Paris?

The simple answer is anyone can work in Paris, provided you have the proper visa and permit. Citizens of EU countries, EEA countries, and Switzerland don’t need a French work permit to secure jobs in Paris. Another way to work without a permit is to come to Paris with a family member who has a specific permit for skilled labor.

Anyone coming from any other country will need a visa or some kind of work permit to work legally in Paris. Getting a job is often the first step to getting a work visa in Paris. The company will typically complete part of the visa process for you. But first, you have to prove you are a better candidate than the French or EU/EEA candidates. French companies invest a fair amount of time and money to secure work visas for foreign employees, and they are well aware of this, so they have to believe it will be worth it.

French speakers have the best chance of finding work in Paris, as the choices become much more limited if your language skills are not that great. Even for jobs where you will use your mother tongue, a proficient level of French is needed in order to communicate with managers and other work colleagues. If you aren’t confident in your French, think about English teaching as a job while you take French classes.

Not knowing enough French doesn’t have to be an issue for finding a job, however. There are many ways around the language issue. Even better, there are opportunities for expats to target English-speaking jobs in Paris that work nicely for someone who is new to France and the language. Some companies actively look for English speakers, so make sure to check those out first. Here are some ideas:

Work in Paris as a nanny or au pair

Being a nanny or au pair is always a good option for anyone who is still learning French, though you should have mastered the basics. Paris is home to many families who need someone to look after their children and do house chores. Parents that want their children to learn English are more inclined to hire native speakers. EU citizens tend to have an advantage over non-EU citizens, due to visa issues, but no certification is needed, just experience in childcare. Also, men are rarely hired as au pairs.

Work in Paris as an English teacher

One of the more obvious job options in Paris is an English teacher or teaching your native language. English language teachers are in very high demand all over France, and native speakers already have an advantage over any native French speakers. However, getting a teaching job in the Paris public school system is very difficult, especially as a foreigner, so look for private language schools or agencies. The pay per hour is generally good, but make sure you keep in mind the time spent preparing for classes and on transportation.

Work in Paris as a tour guide

Tour guide is another one of the English-speaking jobs in Paris that doesn’t involve a lot of requirements besides English skills and an excellent memory for dates and names. Paris is a huge tourist destination, many of whom come from English-speaking countries. Certified tour guides do exist, but you can research on your own and use that knowledge to land a job. Make sure you are ok with handling groups of up to 20 people, sometimes more. Proficiency in any other language is a huge plus as well.

Work in Paris as a bartender or in a hotel

When all else fails, bartending or hotel jobs in Paris prevail. These jobs have saved the lives of many an expat who needed a job and had poor French. It is one of the easiest jobs to get for those who aren’t great French speakers. Also, lots of young Parisians frequent bars and pubs, and some will be excited to have the chance to practice their English while drinking and relaxing.

For more ideas about jobs for English speakers, check out The Local, even if just for part-time jobs in Paris.

There are some English-speaking jobs in Paris that are perfect for expats. For example, there is a need for English-speaking real estate agents as there has been an influx of British citizens moving to France due to economic issues and rising house prices in the UK. There are actually English real estate agencies in France that help British expats find a home in Paris – and they are looking to hire native speakers. One example of such an agency is Leggett Immobilier.

Due to the touristic nature of Paris, hospitality jobs for English speakers are always a good choice. Hotel jobs in Paris are more common during high season for tourism, and you would have to have some level of French as well as some experience (though that depends on the position). Since Paris is such a huge city, there are tons of different hotels and even hostels and other kinds of lodging that need staff that speak English and are willing to hire people without much experience in some cases.

Just like in any other large city, IT jobs in Paris are not too hard to find. Since English is a huge part of the IT culture, being an expat, especially one with IT experience, can be a big advantage. Even if the job isn’t with a company that only does IT, there are many huge companies based in Paris, such as Lacoste and Dailymotion. These types of companies often look for employees with specialist skills and are generally open to hiring foreign nationals with English language skills – the language of modern business.

Creative freelancing is always an option for expats. Native English speakers can often find work with French companies looking for marketing content in English. Editing and translating are other freelance skills that come in useful.

If none of these work for you, take a look at www.jobsinparis.fr or any other search engine for jobs in Paris. Here are a few of the better job websites for France.

Recruitment agencies with work in Paris

Employment agencies in the city are one of the best ways to find work in Paris. They offer a variety of jobs in all employment sectors. However, it helps if you speak French as the interviews are typically held in the native language of office workers.

The French capital has several local newspapers and magazines that advertise English-speaking jobs and multilingual jobs. If you’re looking to work as an au pair in Paris check out the classifieds in FUSAC. They also advertise teaching jobs in Paris.

The Paris News has a comprehensive job section covering a wide range of industries including sales, marketing, technology, finance, engineering, and restaurants.

To find a job in a field you are experienced in might take more time than in your home town even if you have relevant qualifications and experience. One of the best ways to find work is to build a network of contacts in your preferred field.

Paris is a large city and businesses are very active in the community there. You will have no problem finding networking events and showcases to attend where you can make contacts. Here are some of the bigger companies that have a lot of networking events for professionals.

Preparing a French CV and interview tips for Paris jobs

Resumés, or CVs, as they are called outside of the US, are a bit different in France. In terms of length, for senior positions, they shouldn’t be longer than two or three pages, and for anything else, no more than one page.

Cover letters must be handwritten in ink on good quality paper. This is because many French companies will look at your handwriting to analyze your personality.

Once you get to the interview stage, you should know that French companies in Paris often will make you go through up to four separate interviews. For each one, prepare yourself by researching the company and job so you have a few questions to ask the interviewers at the end. Your personality will be analyzed along with your skills, and you might be asked to handwrite something.

Dress is very formal, and the tone of the interview will be as well. Small talk and joking will not happen, and try to refrain from it as it will be seen as unprofessional rather than friendly. Use monsieur and madam to address the interviewer, and use the formal vous rather than tu no matter what age they are. You should greet them by shaking hands. Wait to sit until after you are invited to do so, and be ready for questions regarding your marital status and other personal things such as whether you want to have children any time soon.

Read our guide about the best neighborhoods to live in Paris for more information on living in the city. 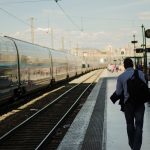 Guide to finding jobs in France