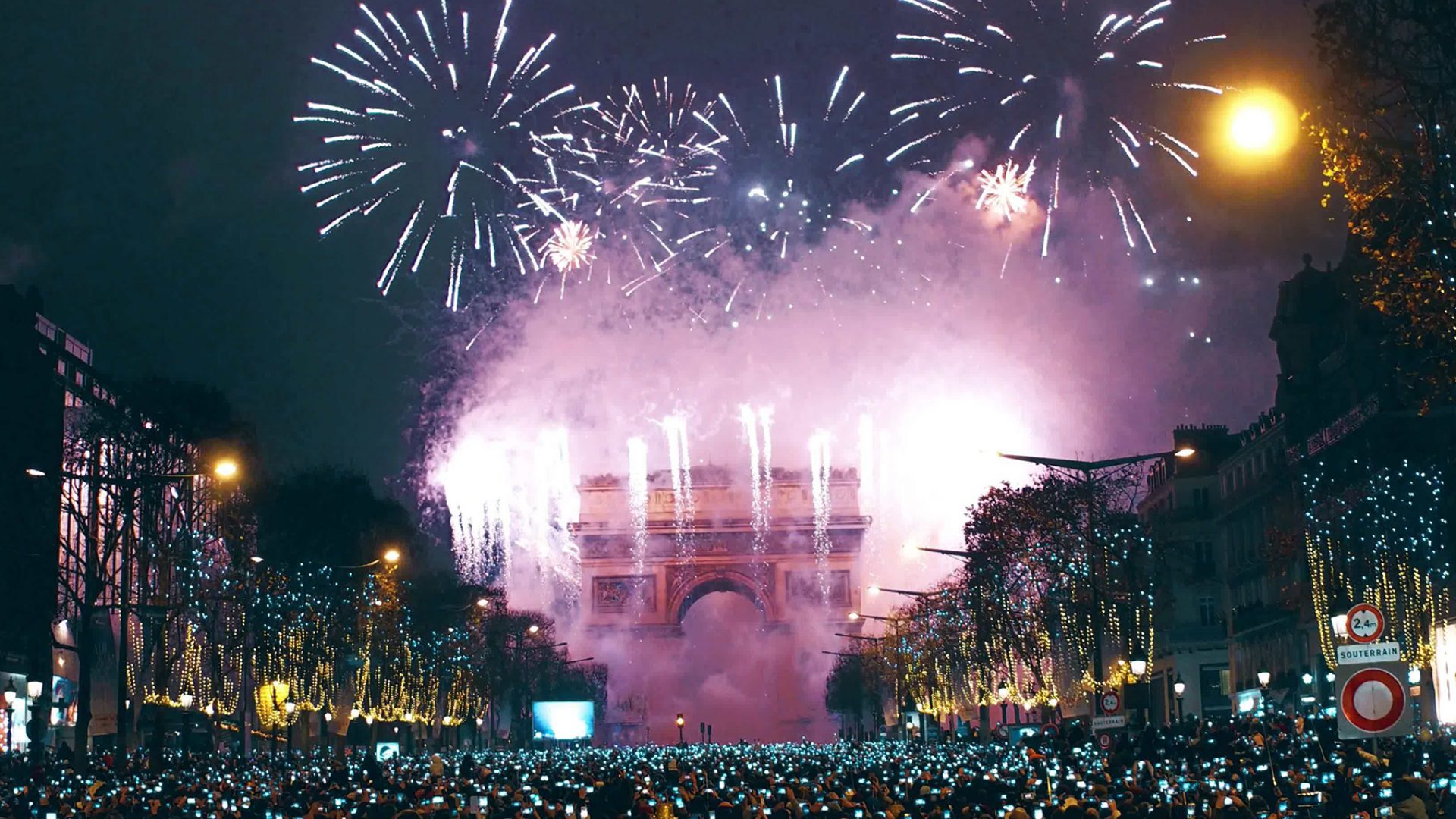 Find out how to jump into French New Year traditions. Make your own French King cake to share with friends for Epiphany in France.

Each year people are unsure what to do to celebrate the new year in France. You can be sure the French New Year involves some delicious food and drink. In France, 31 December is known as la Saint Sylvestre because it is the day dedicated to the saint’s feast day, known as la fête de Saint Sylvestre. The New Year’s Eve feast is also referred to as le Réveillon de Saint-Sylvestre.

Traditionally, New Year’s Eve in France kicks off with a glass of champagne and foie gras; each region also has its local specialties. Here in Fontevraud, locals eat oysters or moules à la marinière (mussels) and toast the French New Year with a glass of Crement de Loire or one of the delicious pettilants wines from the caves of Gratien et Meyer, Vouvray, or Ackermans of Saumur.

French New Year’s parties range from intimate dinners with friends to ‘une soirée dansante’ in the form of une Grande ball. At our local hotel, they sometimes put on a special party with gastronomic delights and degustations for New Year’s Eve in France.

Imagine you’re in a fine restaurant in Paris. A small band is playing jazz. Towards midnight, paper hats and confetti are distributed and everyone counts down to the New Year in France together. Next, watch out for your hats; everyone in the room exchanges kisses and wishes each other a Bonne Année (Happy New Year).

Millions of French people dine out on New Year’s Eve and also the next day. It’s an elaborate feast of as many as 15 courses; eight courses is more usual.

We’ve done it in the past; thus, we may have a fish supper featuring sandre (perch fish) or crab from La Rochelle. Sandre tastes heavenly if prepared simply and paired with a ripe Chenin Blanc or Muscadet wine.

We normally keep some Christmas crackers nearby and pull one with our French New Year’s dinner. At midnight, everyone shares a kiss under a sprig of gui (mistletoe) and offers best wishes. The French kiss under mistletoe (gui’) on New Year’s Eve in France and not before.

It’s common to finish the New Year celebration in France by setting off some fireworks from the garden.

On New Year’s Day, we share our resolutions. Unlike our French friends, we do not usually exchange gifts or cards. In fact, in France you are more likely to receive a New Year’s card wishing you Bonne Année then you would ever receive a Christmas card from a French friend.

According to Clement A Miles who wrote a book in 1912 on the subject of New Year traditions in France, it is on this day ‘that presents are given, family gatherings held, and calls paid’ in France. ‘In the morning’ he goes on ‘children find their stockings filled with gifts, and then rush off to offer good wishes to their parents. In the afternoon the younger people call upon their older relations, and in the evening all meet for dinner at the home of the head of the family’.

Some families may carry on this New Year tradition in France. Most of our French friends exchange presents on Christmas Eve or Christmas Day as times are changing.

For our New Year in France, it is almost certain that following a delicious and extravagant meal we will go for our annual long and winding walk along the picturesque riverbanks at Chouzé sur Loire.

On 6 January in honour of the Epiphany (the day when the Three Kings visited baby Jesus), it is traditional to share with family, friends or neighbours a slice or two of La Galette des Rois, or French King cake. This is a rich puff-pastry case filled with an almond cream paste, in which if you are lucky you will find a little china treasure or ‘feve’. If you do, you are then entitled to wear the golden crown that is usually attached to the cake and become the King or Queen of the party, who then can also choose someone to be their king or queen and lead a traditional dance.

At this time of the year, a profusion of the kits for these galettes fill the shelves of French supermarkets, though, you can also have a go at making one with the below King cake recipe.

Combine the almonds and sugar, and add egg white while working the mixture vigorously. The paste should be firm and smooth when ready. Sandwich one side of the pastry with a generous slathering of apricot jam. Next do the same with the almond paste onto the second round of pastry.

Place on top of each other and brush over the beaten egg yolk. Sprinkle with sugar. Bake in a pre-heated oven (180°C) for around 15 minutes or until it is a rich golden brown colour.

When you make a French King cake, the advantage is you put in your own special ‘fève‘ (token).

French King cakes are traditionally served with a plain top, but you can adorn it with candied fruits or fill it with a chocolate paste if you prefer it to the Frangipane one above.

You can make your own crown with card, foil, stickers, faux jewels, glitter etc.; it’s a fun activity for children to create your own mini workshop dedicated to the theme of Epiphany in France and La Gallette de Roi.

Let your imagination express itself: if tidying up is a problem, play a game of carefully taking down the decorations and putting them away for next year.

A taste of the New Year in Paris

To give you examples of the kinds of French food eaten at New Year’s in Paris, here are some inspirations for your New Year menu (la menu pour le Jour de l’An):

What was it that Sir Walter Scott said about New Year? ‘That each age has deemed the new-born year the fittest time for festal cheer’. Well certainly according to New Year traditions in France on December 31 and January 1, the New Year celebration in France can be even more ‘festal’ than Christmas.