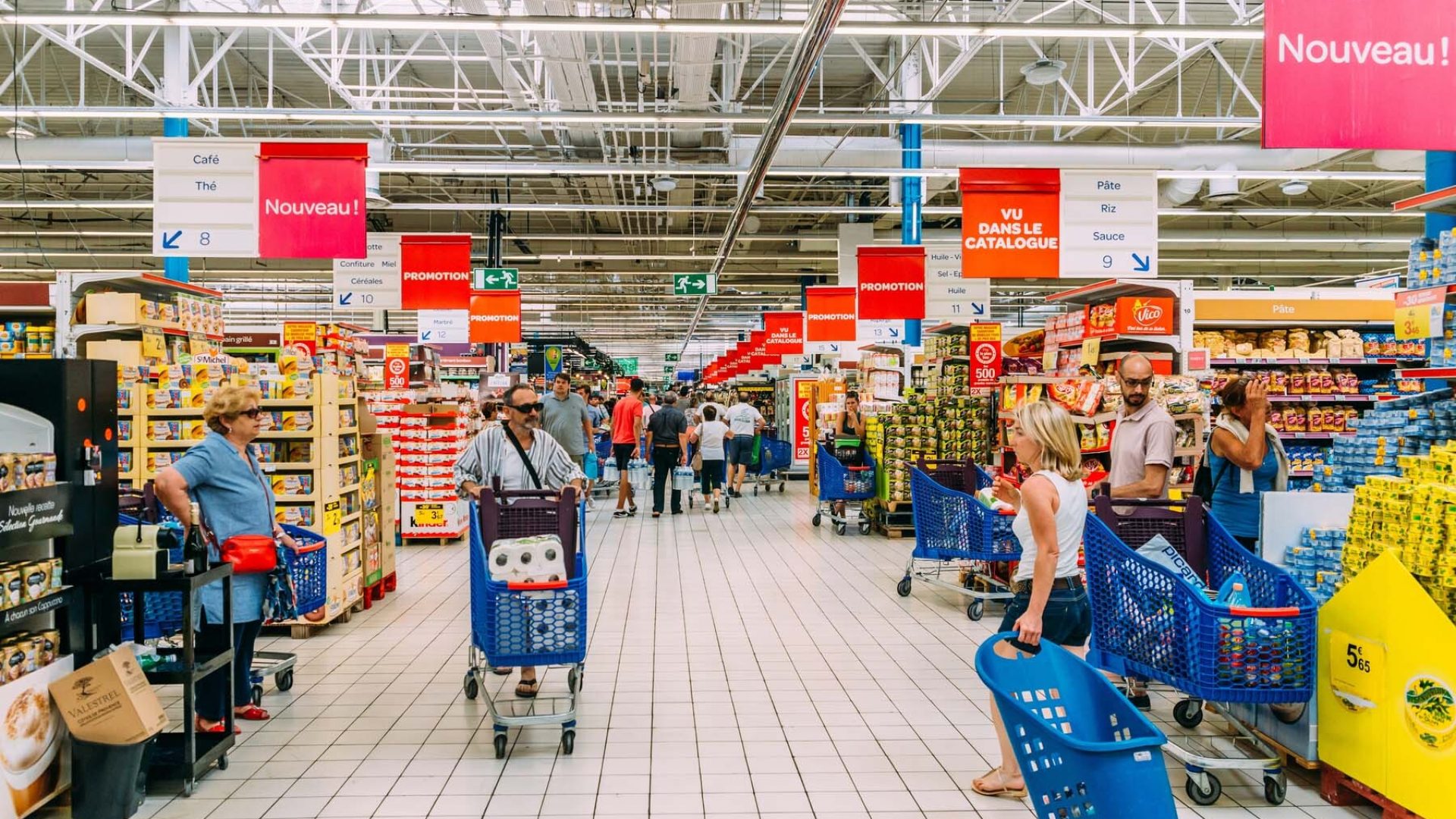 Enjoying the taste of French life? Find out how to bring all those French flavors home with our guide to supermarkets and grocery stores in France.

From baguettes to Boeuf Bourguignon, it’s safe to say that France is a food lover’s paradise. For expats in France, discovering all these sumptuous flavors at your local grocery store is undoubtedly a highlight of everyday life. There are shelves and counters crammed with all sorts of new food and drink to try, buy, and fall in love with. Supermarket shopping will never be a chore again.

But, if you’re relocating to France it can be challenging to know which food shops to visit and how supermarkets work. To help you out, our guide to French supermarkets and grocery stores includes information on the following:

Whether you’re arriving in Paris or Perpignan, the local supermarket is probably one of the first places you visit in France. When you walk through the doors for the first time, you’ll probably soon realize that French grocery stores aren’t quite the same as back home. But that shouldn’t stop you from filling up that shopping cart.

Not a fan of the supermarket? Well, luckily you don’t have to be in France because there is a whole shopping list of other options where you can grab your groceries. These include local fresh food markets, specialty shops, and meal-kit boxes delivered straight to your door. And if you don’t want to cook at all, you’ll probably be well-fed at your local restaurant, café, or bar.

The first thing to know about supermarkets in France is that they come in all shapes and sizes. If you’re living in one of the bigger cities like Paris or Lyon, you’ll probably come across smaller stores in central locations. These sell everything you need in terms of food, but not a great deal beyond that.

In more suburban and rural areas, you’ll come across large supermarkets and hypermarkets. These are located in out-of-town locations and are easily accessible by car. There will probably also be a bus stop near the store. These stores are much more similar to the North American model of supermarkets; they sell everything from clothing and electronics to homeware, alongside a wide range of fresh food and drink.

Generally speaking, supermarkets in France are relatively inexpensive, particularly outside of city center areas. You’ll also have plenty of variety when it comes to choosing products. They are well-stocked with good quality fresh produce and dried groceries and most also have in-store bakeries. You’ll also come across in-store offers and discounts that will make your money go even further.

France has a range of supermarket chains and most are nationwide, although there are still some regional disparities. Therefore, you might not have the entire selection to choose from in your local area. Some of the main supermarket chains in France include:

Where should you live in France? Find out with our guide

There are plenty of other supermarket chains across France, including Leader Price, Casino, and Match. The availability of these stores will often depend on where you live.

As in many other European countries, discount retailers have become increasingly popular in France over the last decade or so. Leading discount supermarkets in France include:

If you’re after a more niche shopping experience in France, you might want to check out a specialty supermarket. These stores offer more focused product ranges and include:

Unlike in other countries, supermarkets in France have resisted the urge to open 24 hours a day. Instead, most stores (regardless of size) will generally open at around 08:00 and close around 20:00 or 21:00. Supermarkets in larger cities will often have longing opening hours.

Be aware that most supermarkets in France remain closed on Sundays. Some will open during the morning but then close around lunchtime. This means that you’ll need to arrange your grocery shopping beforehand or treat yourself to a meal out on Sunday.

Things you need to know about French supermarkets

If you’re an expat living in France, there are a few things you should know about French supermarkets before you go wild in the aisles. Here are some things to keep in mind:

What should you download? Find out with our guide to the best French apps

If you’re not able to visit your local supermarket or simply prefer the convenience of getting your groceries delivered, then you’re in luck. Most French supermarkets offer both home delivery and pick-up options at the store. Simply shop online and choose the time slot for delivery or pick-up.

There are other delivery options in France, too. These include food boxes from local producers and pre-prepared meal-kit recipe boxes, both of which can be delivered to your door. These recipe boxes are filled with seasonally fresh ingredients, letting you create your own meals at home. French meal-kit providers include:

Thanks to its multicultural society, France has a large number of ethnic supermarkets in and around its towns and cities. These stock a much wider range of international foods than regular supermarkets, including foods from North Africa, the Middle East, and Asia.

Generally speaking, French supermarkets are fairly inexpensive when compared to grocery prices in some neighboring countries. However, some locals and expats find these ethnic grocery stores are much cheaper than regular supermarkets, particularly for foreign foods.

Don’t fancy marching down the aisles in your local French supermarket? Then why not head to your nearest food market? For many expats, the thought of wandering through a French market is one of the main attractions of life in France. And wherever you move to in France, you’ll probably find the local market becomes an everyday fixture of your new life.

Most markets have a wide variety of stalls. Some will sell fresh fruit and vegetables, while others will stock meat and dairy from local producers. In some larger cities, you may find more niche offerings, such as world foods and groceries or even fabrics, clothing and homewares. Whichever market you’re going to, don’t forget to take a tote bag with you so you can stock up on all those delicious foods.

Another great perk of living in France is all the excellent local specialty stores you’ll soon find in your new home. And, as you’ll probably expect from France, there are lots to sink your teeth into. You’ll find fresh meat at la boucherie, fresh fish at la poissonerie, chocolate at le chocolatier, and, of course, all the French cheese you could ever dream of at la fromagerie.

Of course, for many new arrivals in France, the first place they’ll want to check out is the local bakery, also known as la boulangerie. Here, you’ll find all sorts of freshly-baked bread, croissants, pains au chocolat, and plenty more. If your local bakery doesn’t sell cakes, you’ll need to head to your nearest pâtisserie.

Sometimes you’re in a hurry and just need to grab a quick bite to eat. In France, you can do this by visiting your nearest convenience stores. Most of these are independently run, and you’ll usually find at least one in most neighborhoods. However, there are some nationwide chains, including:

Compared to many other European countries, alcohol in France is relatively inexpensive. Most locals will buy their beer, wine, and spirits at their local supermarkets. Wine prices will vary considerably, but the local tipple will usually be cheapest. The legal age to buy alcohol in France is 18.

Because of the availability of alcohol in France, the US-style liquor store is not very common. In fact, there are very few bottle shops in France. However, you’ll find plenty of wine merchants, local breweries, and more, should you wish to explore the local alcohol scene. You can also peruse the growing number of online alcohol retailers, such as:

Here, you’ll be able to find a wide selection of beers, wines, and spirts from France and beyond. Simply place your order and wait for your favorite drinks to be delivered straight to your door.

Missing food from home? Well, luckily French supermarkets are fairly well-stocked when it comes to foreign foods. Many supermarkets will stock a small range of products from the UK, Italy, Germany, and further afield. In larger cities, you’ll even find international grocery stores, like the many M&S Food outlets in Paris. Here, you’ll be able to buy a wider range of foreign products.

However, if that’s not enough, there are also online grocery stores that can deliver your favorite foods internationally. This includes British Corner Shop, which specializes in goods from the UK. Read our directory listings to find a service that can deliver to your new home.