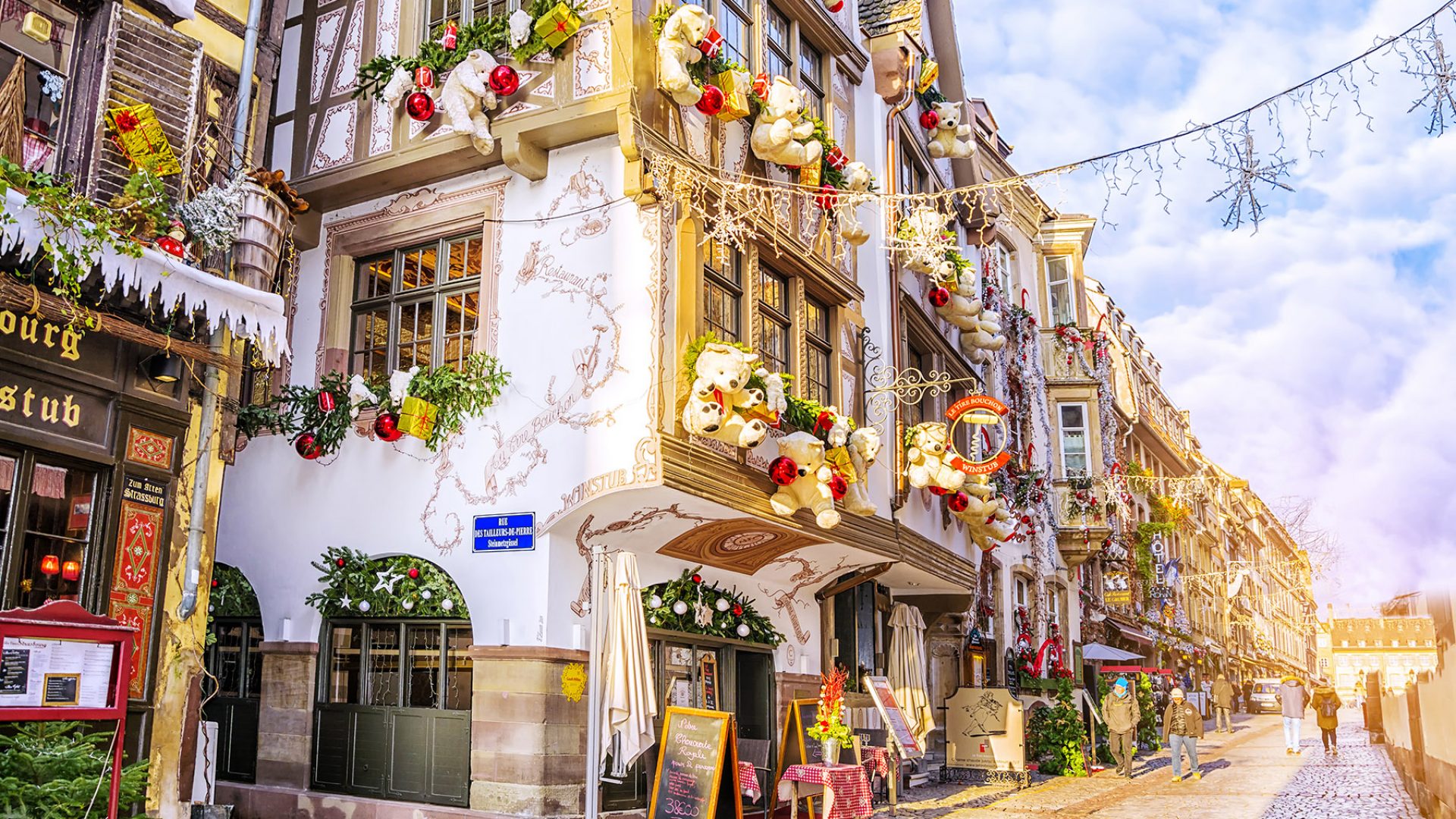 The four weeks before Christmas are dedicated to preparations for Christmas. On 1 December children open their first ‘window/door’ in the Advent calendar. This French Christmas tradition makes kids even more excited about upcoming Christmas events.

The evening of December 24th is when French families sit down together to celebrate Christmas and enjoy festive French foods and wines. If you’ve heard about French people eating long and slowly, this dinner is the greatest example of this French custom. The meal can go for up to six hours.

This is the name of the French Christmas Eve meal, which is a big and long feast. The name comes from the verb réveiller, to wake up or revive. Increasingly more families start this French Christmas tradition on Christmas Day, when it is easier for the whole family to gather together.

A church service is held on Christmas Eve. It is actually an important Christmas tradition in France for many people who try to attend the mass, although more and more people prefer services on Christmas Day.

To finish the feast you will get the amazing looking and tasting La bûche de Noël (yule log), a sponge cake decorated like a yule log, traditionally made of chocolate and chestnuts.

This is a Provençal French Christmas tradition but worth mentioning as it sounds so ‘challenging’ – can you imagine having 13 desserts after the main (big) Christmas feast? In France they are important as they symbolise Christ and the 12 apostles at the Last Supper.

Typical desserts include fruits, nuts and sweets such as dried figs, hazelnuts or walnuts, almonds and dried grapes or a cake called Pompe à l’huile. As part of this Christmas tradition in France, everyone has to taste each dessert in order to have good luck for the upcoming year.

Mulled wine is popular in bars and in French Christmas markets, although you won’t see it so much at French houses. During Christmas dinner a very good wine is required and Champagne is imperative.

It is very important for French people to have their Christmas dining table looking extremely elegant and inviting. It’s common to put three candlesticks on the table, which represent the Trinity. An interesting French Christmas tradition is that the French knot the ends of the tablecloth so the Devil can’t get under the table.

The Christmas tree is decorated some time before Christmas Day, so there’s plenty of time to be ready for Christmas Eve when Santa Claus comes.

10. Shoes in front of the fireplace

French children put their shoes near the fireplace so that Père Noël can find them and fill them with small presents or treats.

Time for presents! Père Noël brings them during the night and kids typically open their presents on the morning of Christmas Day.

Father Spanker is the partner and helper of Saint Nicolas. He decides if each kid behaved good or bad. He is the one who does the ‘spanking’ to bad behaving children.

Theses are the chocolates (or candied fruits) wrapped in golden sparking paper with fringed ends. Inside there is a little note written on it. The papillote was created in Lyon at the end of the 18th century.

Mistletoe is popular in French Christmas traditions and used as an important decorative item. People hang it above the door during the Christmas season, where it is supposed to bring good luck during the the coming year – so where is the kissing?

These are the nativity scenes or crèches displayed in many French homes. There are little clay figures called santons or little saints in the crèche, which you can buy from Christmas markets. There are plenty of pieces available for sale so you can create a small or huge crèche at home.

These are the nativity scene shows that are very popular particularly in the south west of France. They are performed at various times during the Christmas season.

The ‘king’s cake’ celebrates Epiphany in France. There are three versions of this cake and the most popular consists of flaky puff pastry layers with a center of frangipane or apple. There is also a sablé galette which has a type of sweetcrust pastry and brioche cake with candied fruits and sugar. The cakes are usually sold in special bags with the paper crown for the ‘king’ who finds the fève – a small figure/bean hidden in their piece of cake.

Traditionally, it it the youngest in the family who distributes the pieces of cake hiding below the table and shouting the name of the person who should get each piece.

There are not many traditional French Christmas carols, and are usually hymns from church instead. That is why many Christmas songs have been taken from UK, Germany and other places. Over time, non-religious songs have been translated from different languages into French, for example the French Jingle Bells is Vive le vent.

French people wish each other Joyeux Noël or Bonnes Fêtes. It’s important never to wish anyone a Bonne Année (Happy New Year) before midnight on New Year’s Eve as this brings bad luck.

There are typically few Christmas cards. Traditionally cards are sent to celebrate the New Year.

Christmas crackers were invented by Tom Smith in the19th century as an inspiration from his visit to Paris. Apparently he saw the French ‘bon bon’ sweets (almonds wrapped in pretty paper) and once he returned to London he started selling them with a small motto message inside. Then his sons added paper crowns and small gifts and they become really popular in England. Sadly, crackers have never become part of French Christmas traditions.

This is a popular feature of the Christmas in France and beloved by kids!

Christmas markets are very popular in France, although perhaps not exclusively a French Christmas tradition. There are a few towns and villages in France where artisans produce, gifts and local culinary delicacies, such as foie gras and confit de canard, are sold.

This is the the most famous and oldest Christmas market in France. You can find it in Strasbourg in Alsace with many traditional French products to buy as gifts.

Would you recommend any other French Christmas traditions to try? What’s your favourite? At the end of the day, it is not a place, food or tradition that is important for Christmas but fact you are with people who are important to you.