Belgian food offers a gourmet tour for your taste buds with its mix of elegant and comfort recipes and dishes. Find out the top 10 Belgian foods you must try.

Belgian food plays an important part in Belgian culture. Everyone knows about the famous Belgian waffles but did you also know that Belgium has one of the highest densities of Michelin-starred restaurants in Europe, although many Belgians’ top favourite foods are also home-cooked comfort dishes and street-vendor snack foods.

Just as the country is divided linguistically, it’s also divided food-wise. Flemish cuisine has a strong Dutch influence, while Wallonian cooking is very similar to French foods with lots of rich sauces. Most dishes are based around meat or fish, with seafood playing an important role in Belgian cuisine. In 2017, even Ostend’s oysters, referred to as ‘Ostendaises’, were granted Flemish protected regional status; grown in the Spuikom, just off the shoreline, it’s the only approved site in Flanders for oyster-growing

On the sweet side, top Belgian desserts are often rich pastries or decadent chocolates. Almost everything, including desserts, is usually washed down with wine or the national drink beer.

Here we list 10 top Belgian foods you have to try, as well as recipes so you can incorporate a touch of Belgian food to your weekly menu – some of the top Belgian dishes are easier to make than you think.

This sweet-sour steak and ale stew (stoofvlees or stoverij) has a great many variations, with families handing down their own recipes from generation to generation. Most include beef, a rich dark beer, bread, onions, salt, pepper, herbs (like bay and thyme) and spices. Other ingredients are carrots, mushrooms, bacon, red wine, shallots – and even dark chocolate! A long marinade and slow cooking are crucial for flavour and tender meat. It’s usually served with frites, boiled potatoes, noodles, salad or green veggies – and of course, more beer.

Belgium’s classic fish dish is sole meunière, the latter part of the name translates as ‘in the way of the miller’s wife’ – that is, dipped in seasoned flour and then pan-fried in a small amount of butter. Lemon juice and some chopped parsley are added to make a rich brown butter sauce. The fish is served with potatoes: as frites, boiled or mashed. Also popular in France.

You might not find this on the menu of a Michelin-starred restaurant but gegratineerde witloof/chicon au gratin is a popular, comfort dish served up in many Belgian homes. A Flemish speciality, endive (which the Belgians call wifloof, chicon or ‘white gold’, or some know as chicory), has a distinctive, tangy flavour and is used in appetizers/starters, soups, salads and main courses alike. Ham and endive gratin is a dish that combines this leafy vegetable with a regional cheese and prime boiled ham, traditionally served with mashed potato. Interestingly, all the endives sold in mainstream shops in the US are imported from Belgium.

Don’t order this and expect a juicy steak to arrive on your plate. Filet Americain is seasoned raw minced beef served cold, rather like the French steak tartare. Various seasonings are added to the beef (which must be very lean) to give it flavour: raw or pickled onion, egg yolk, Worcestershire or Tabasco sauce, ketchup, mustard, parsley, capers, salt, pepper and oil. You can eat it in two ways: spread on bread or toast (when it’s called toast kannibaal or ‘cannibal toast’), or as a main meal, accompanied by frites and pickles. If you order it as a main course in a restaurant, it may be prepared at your table so you can have it just how you like it.

About 30 million tons of moules frites are eaten every year in Belgium (that’s 3kg a person), in a season that runs from September to February. The most common way to cook them is in white wine, shallots, parsley and butter (la marinere) although other recipes replace the wine with Belgian beer, add cream (la crème), or use a vegetable stock. Dispense with cutlery and eat as the Belgians do – use an empty shell like a pair of tweezers to scoop out the mussels.

The traditional accompaniment to mussels is frites (what Brits call chips and Americans call French fries). According to historian Jo Gerard, the Belgians invented frites, way back in 1781. Frites are thicker than French fries and very crisp because, like traditional English chips, they’re fried twice. You can pick up a cornet de frites (frites in a cone-shaped card container) from a mobile food stand known as frietkot (or fry shack). Frites special come with fried onions, otherwise try them with mayonnaise, tartar or béarnaise sauce or samourai, a spicy chilli mayonnaise.

Steak frites is almost on a par with moules frites, and if you choose this in a restaurant you’ll be able to select your cut (entrecote means rib eye) and offered a choice of sauces – such as mushroom, pepper, béarnaise or Roquefort – to accompany.

This is comfort food, pure and simple. Stoemp is a typical Brussels dish made from mashed potatoes mixed up with other mashed vegetables. These traditionally include endive, kale, onions, carrots, turnips, Brussels sprouts, spinach and greens. Sometimes cream or milk is added to the mix. It’s a bit like the English ‘bubble and squeak’ or American ‘hash’. Eat it on a grey winter’s evening with bacon, sausage, beef or some boudinblanc (fried sausage made of pork without the blood) or noir (black sausage), and you’ll soon feel all is well with the world. If that’s not to taste, try the Flemish white sausage (witte pens/boudin blanc), made with milk for a softer flavour.

This traditional Flemish dish can be translated as ‘eels in the green’ and that’s exactly what it is: eels in a very, very green sauce. Fishermen used to catch the eels in the river Scheldt, between Dendermonde and Antwerp, and then prepared the dish with whatever fresh herbs they found along the river banks. Today, the sauce is made from a mix of herbs, which may include chervil, sorrel, parsley, mint, watercress, basil and thyme, which must be added at the very last minute in order to preserve their vibrant colour. Enjoy this dish served up with frites or bread.

Gentse waterzooi is a soup-like stew. Waterzooi comes from the old Flemish word zooien, meaning ‘to boil’ and gentze shows that the soup originates from the city of Ghent. It’s traditionally made from fish such as carp, pike, eel and bass – but these days more commonly these made with chicken – as well as vegetables like carrots, leeks, potatoes, and then thickened with eggs, cream and butter. It’s usually served with toasted French bread to mop up the soup.

Boulettes are a great staple of Belgian home cooking on both sides of the language divide, with plenty of variations found around the country and usually served with frites or mashed potato. In Flanders, balletjes are typically found covered in tomato sauce, or Frikadellen-style ‘met krieken’, where the meatballs are fried in butter with Belgian cherry sauce. South of Brussels boulets Liégeois are popular, served with a rich mixture of beef stock, spices and sirop de Liege, a fruit syrup made from apples and pears, similar to molasses, that gives a distinct sweet taste.

This North Sea delicacy can be found all over Belgium and some seafood restaurants will serve you a snack bowl of these crunchy crustaceans. Gray shrimp, which despite their name and apperance have a sweet and delicate flavour, are prepared in a number of ways; you can find tomate crevette, fresh tomatoes stuffed with a prawn salad, croquettes of crevette (garnaalkroket in Flemish) or eaten peeled as a snack with beer. This shrimps were traditionally harvested all along the Belgian coast by fishermen on horseback, and is still practised in the coastal village of Oostduinkerke and forms part of UNESCO’s list of intangible cultural humanity heritage.

Belgian desserts are more than just chocolate and waffles, as you can see in our guide on top 10 Belgian desserts. A couple of Belgian favourites, however, are waffles and La Dame Blanche.

Belgian waffles (gauffres) are internationally known, but in Belgium there are two different types: the Brussels waffle and the Liège waffle. The Brussels waffle is rectangular, golden brown on the outside, dusted with powdered/icing sugar and then sometimes covered with syrup, slices of fruit, chocolate spread and whipped cream – all of which is deemed a mite inauthentic by waffle connoisseurs! The denser textured Liege waffle is square and has burnt sugar on the outside. They are sold by street vendors and gourmet restaurants alike, all over Belgium.

La Dame Blanche is another Belgian classic dessert, which although simple is extremely delicious: vanilla ice cream topped with melted chocolate sauce (and remember, the Belgian’s make the world’s best), fresh whipped cream and maybe a cherry. It’s the Belgian equivalent of a hot fudge sundae and you’ll find it on menus all over the country. It goes well with Belgian Cherish Raspberry Lambic beer. 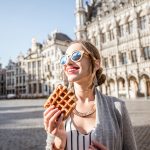 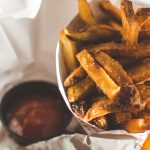