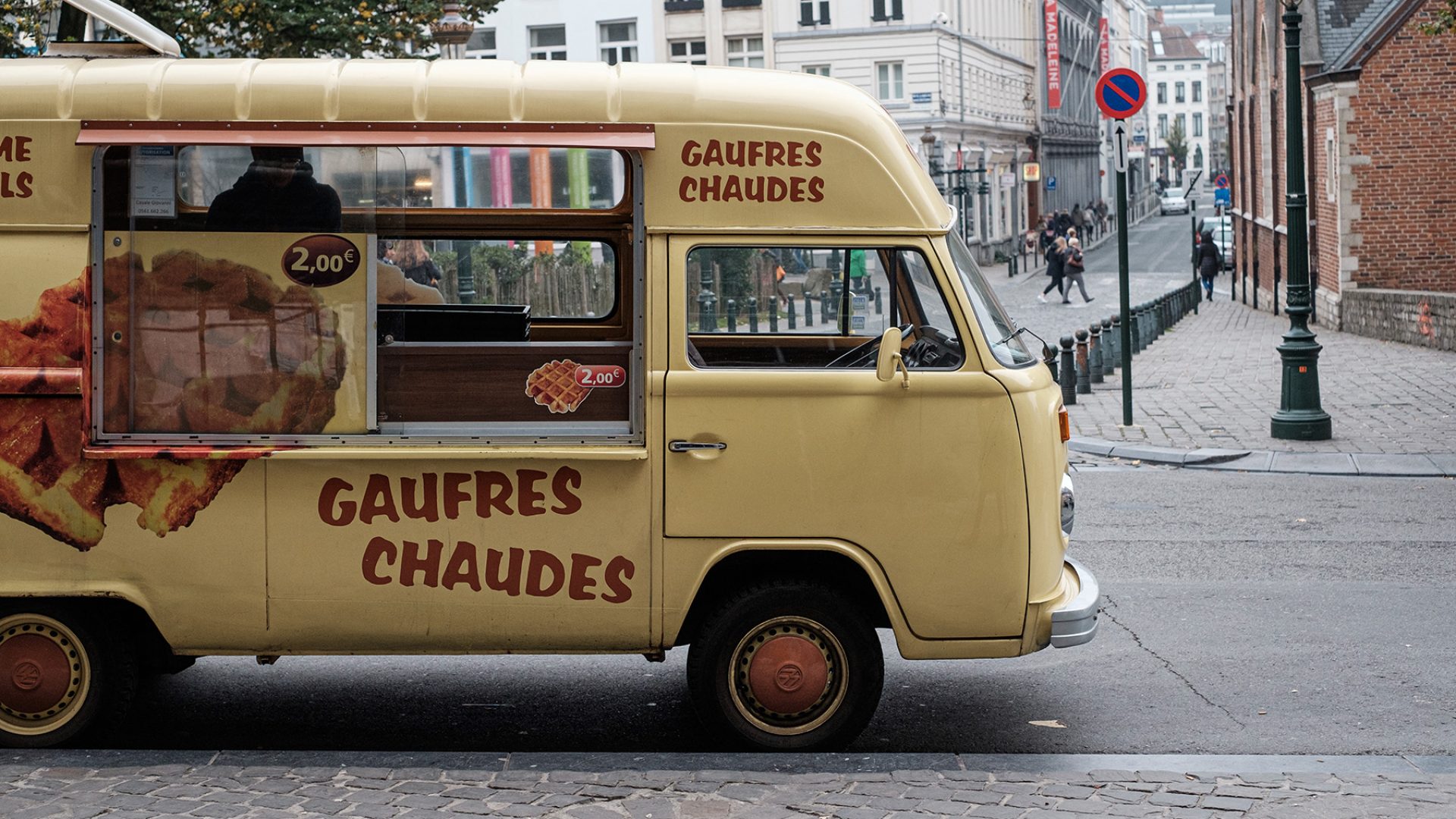 From waffles and puff pastries to tarts and omelets that pack a punch, we delve into the most tantalizing Belgium desserts you have to try.

Belgium is renowned for producing some of the best chocolate in the world. In fact, the country produces a whopping 172,000 tons of it every year and boasts more than 2,000 chocolatiers. But if you think that chocolate is the only specialty that this little country has to offer, then think again, because Belgium is also home to some of the most devilishly delicious desserts you can imagine. Indeed, expats with a sweet tooth will have the time of their lives exploring the country’s bountiful selection of tasty delights. So prepare to drool as we delve into the most delectable offerings the chocolate-loving nation has to offer.

Don't feel like baking this evening? Then why not indulge your sweet tooth with Takeaway.com. From your neighborhood ice cream parlor to your favorite downtown donut bar, you'll find all the best Belgian desserts and more on Takeaway.com. Simply make your choice, sit back, and wait for dessert to be delivered straight to your front door. Bon appétit!

See what's on the menu

Mattentaarten are small, round sweet puff pastry cakes with a light, airy filling of mattenbrij or curd cheese. The cakes are the specialty of the city Geraardsbergen in the Flemish Ardennes and were granted the Protected Geographical Indication (PGI) by the European Union in 2006. This means that they can only be made in the city or the nearby municipality of Lierde. Needless to say, the mattentaart is a source of pride for residents of Geraardsbergen, which is one of the only cities in Belgium to have received this EU designation. Another small tart with historical origins is the Lierse vlaaike, which is made from a – supposedly secret – spiced cake recipe created more than three-hundred years ago. This is one of the oldest baked goods from the Antwerp province – and also one of the most delicious desserts you will find in Belgium.

For many, Belgian waffles are the pièce de résistance of Belgian desserts and don’t need an introduction. But what is perhaps less known is the variety of waffles which vary by region. Two of the most popular varieties are the gaufres de Liège (Liège waffle) and the Brussels waffle. The gaufres de Liège – also known as gaufres de chasse (hunting waffles) – is made of brioche bread dough mixed with pearl sugar that caramelizes when baked. This gives it a denser, chewier, and sweeter finish. The Brussels waffle, however, is lighter, crispier, and easily recognizable by its perfect rectangular shape. It is made with an egg-white-leavened or yeast-leavened batter and traditionally served plain or with a dusting of confectioner’s sugar. You can find both varieties in street stands, restaurants, and tea rooms (gauferies) all over Belgium and they are best eaten with your hands – just like the Belgians do!

La dame blanche is the Belgians’ twist on the hot fudge sundae and certainly not for those who dislike rich desserts. The devilishly delicious treat is served in a glass and comprises vanilla ice cream, a fresh whipped cream topping, and cherries. It is then drizzled in a special warm sauce au chocolat of heavy cream, bittersweet chocolate, and butter. As a special touch, the delectable dame blanche is usually paired with a sweet-yet-sour kriek (a lambic beer brewed with cherries from Brussels). This simple yet tasty dessert is a staple on restaurant menus throughout Belgium and also a popular after-dinner treat in many Belgian households. Therefore, if you are dining out in Belgium, be sure to leave plenty of room for this cheeky delight.

Referred by the New York Times as an “obscure hidden gem from the 19th century,” rum omelets are rare on modern-day Belgian menus. Nevertheless, it remains of the most delicious desserts in Belgium and is definitely worthy of a spot on our list of the best sweet dishes the country has to offer. The dessert requires you to thoroughly mix beaten eggs, caster sugar, cream, butter, and a glassful of sherry rum together before cooking it in a shallow pan; before serving it with powdered sugar on a hot dish. For a show-stopping dessert, you can set light to a big spoonful of rum, pour it over the omelet, and watch your food ignite. That’s certainly one way to impress your dinner guests when you invite them over for a Belgian feast.

One of the most popular desserts in Belgium is undoubtedly the appelflap. Not only is this one of the best comfort dishes the country has to offer, but it is also one of the easiest to make. Essentially, appelflappen – or chausson aux pommes – is the equivalent of the popular apple turnover in England. It consists of puff pastries stuffed with a mixture of apple, cinnamon, and sometimes almond paste, raisins, or currants; then sprinkled with sugar. When placed in the oven, the apple becomes sweet and gooey. The trick to making the best appelflappen is baking it with real butter and using yellow-green apples for the filling. Additionally, for a lovely finishing touch, you can add a dash of grated lemon peel and a pinch of rum powder to give it that extra flavor. This dreamy dessert pairs perfectly with hot or iced coffee.

Another beloved dessert in Belgium is stofé, a popular sweet cheesecake that originates from the city of Wavre in Belgium’s French Wallonian region. To make it, cottage cheese, or stofé in Walloon, is blended with meringue and bitter and sweet almonds and poured over a bed of sliced apples. The neighboring city of Jodoigne also has a soufflé-like version of the dessert called the blanke doréye. However, this replaces the almonds with a hint of vanilla and the sliced apples with mashed ones. Whichever way you make it, though, be sure to use quality cottage cheese as this is what gives the dessert its unique flavor. Stofé is a great option for those who want a sweet ending to their dinner but prefer a dessert without rich chocolate or cream.

Originating from Dinant in Wallonia, the Couque de Dinant is a hard-as-rock sweet biscuit that is made with only two ingredients – wheat flour and honey. As the legend goes, these were the only ingredients left when the town was under siege in 1466. The biscuit’s tooth-cracking consistency comes from the dough being cooked under the extremely high temperature of 300°C for 15 minutes, which allows the honey to caramelize. Coques come in a wide variety of designs such as people, flowers, animals, and even landscapes. They can also be preserved for a long time and tend to be used as Christmas tree ornaments or to commemorate special occasions. Amazingly, residents of Dinant feed this tough biscuit to small children to make their gums stronger. That said, it’s best eaten by breaking off small chunks and slowly melting them in your mouth to release the honey flavor.

Like their Dutch neighbors, pannenkoeken are a typical dessert in Belgian cuisine, especially in Flanders. Made with a batter of flour (or buckwheat), milk, eggs, and salt, Belgian pancakes are bigger and much thinner than North American pancakes but thicker than French crêpes. Pannenkoeken can be enjoyed sweet or savory with toppings such as bacon, cheese, raisins, sliced apples, candied ginger, smoked salmon. In fact, they can include just about any ingredient you can think of – it’s all about personal preference! A final garnish of stroop, a thick saccharine syrup, is usually added to finish off dessert versions. Cooking pannekoeken is typically a group affair, so make sure to invite your friends or family over to join in the feast.

Another Dutch-favorite that is shared with Belgium is the oliebollen. Translated as ‘oil balls’, these deep-fried spheres origin dates back to Germanic tribes hundreds of years ago. A step above your normal doughnut, they are usually eaten during winter and to celebrate New Year’s celebration. The dough, which has sugar and lemon zest added to it, sometimes contains sultanas and other dried fruit. Oliebollen are best enjoyed either piping hot straight off food stands or cold with a cup of coffee. Just don’t forget to top them off with a generous helping of powdered sugar. Delicious!

Other than baked goods, Belgians have a strong love for candies, which are otherwise known as snoep or confiserie. One of the most well-known snoepjes in Belgium is cuberdon, a cone-shaped candy made of gum arabic that has a hard outer layer but a soft core. Cuberdons originated in Flanders and are sometimes referred to as neusjes in Flemish due to the resemblance to a neus (nose), or chapeau-de-prêtre in Wallonia (a priest’s hat). They come in a wide variety of flavors; for instance, the classic violet raspberry to more recent variants like tropical fruits, cookie, or jenever (gin flavor). You can savor them the traditional way by biting off the top and sucking out the syrup. Alternatively, you can drop them in champagne, tea, or vodka, to add an explosion of taste. 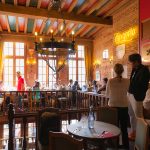 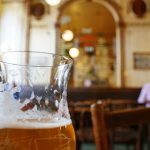