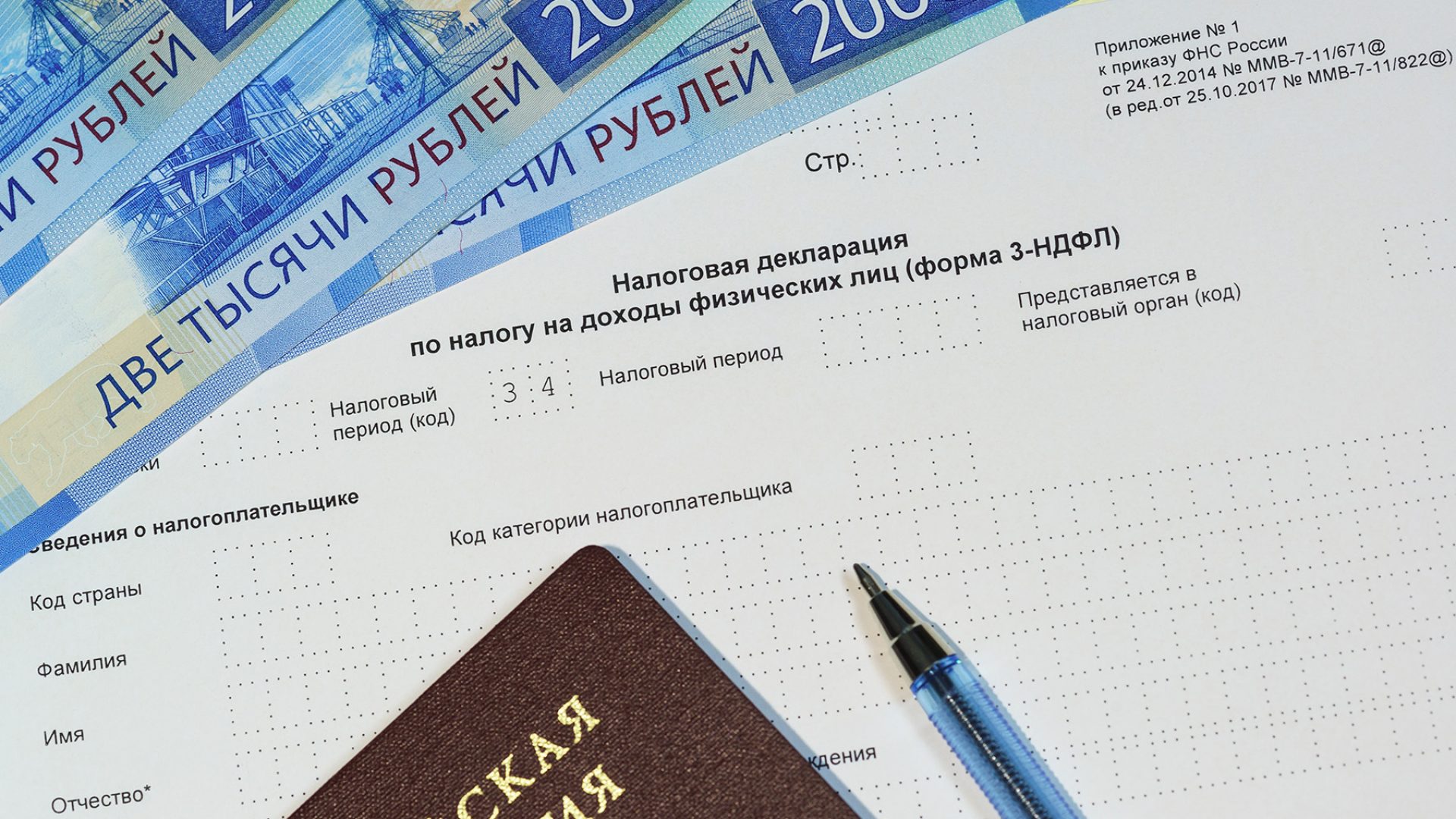 Home Finance Taxes How to file your income taxes in Russia
Last update on August 13, 2021
Written by Keith Fernandez
Share

Income taxes in Russia are levied at a variable rate depending on earned income and residency status. This guide explains everything you need to know.

Expats living within the Russian Federation and non-residents with investments in the country must pay Russian income tax on any earnings from local sources. In January 2021, Russia implemented a progressive income tax rate for residents. Non-residents generally pay higher taxes in Russia and are not eligible to claim income tax deductions and allowances.

This guide explains how to file your Russian tax return, with information on:

The income tax system in Russia

The Russian Tax Code governs direct and indirect taxes within the country. Russia’s tax system has a progressive tax rate of 13% for an annual income of up to 5 million p. and 15% for income exceeding that amount, with a few exceptions. Non-residents generally pay a flat tax rate of 30%.

The Federal Taxatio Service of Russia (FTS), which is governed by the Ministry of Finance, oversees the administration of income taxes in Russia. Expats and nationals alike need a 12-digit Tax Personal Identification Number (INN). In general, your employer will assist with obtaining the tax number. Foreign citizens are obliged to contact a local FTS office to register for income taxes in Russia. You will need to provide copies of a document that certifies your identity, such as your passport and your Russian residence permit.

You can pay personal income taxes in Russia in two ways. First, withholding at source. This applies to most highly specialized expats working in Russia, who will see their employers deduct taxes from their wages. On the other hand, when tax is not withheld at the source, as the recipient you are obliged to file a return.

Income taxes in Russia are in rubles (p.) at the rate applicable to each income category.

See our comprehensive guide to the Russian tax system

Who pays income taxes in Russia?

All foreigners living in Russia and receiving an income from a local source must pay Russian income taxes. Such residents (i.e. people who live in the country for more than 183 days per year) must also declare their worldwide income and file a tax return on any overseas income. Non-residents, on the other hand, are only taxed on Russian-source income.

Individual businesses such as freelancers, contractors, and consultants pay personal income taxes in Russia on their business income whether it arises from a local or international source.

Taxes on income and salary in Russia

A resident of Russia, living in the country for more than 183 days per calendar year, must pay tax on income arising from a number of sources, including wages, self-employment, dividends, interest from investments and savings, rents, and royalties. There is no separate capital gains tax in Russia, therefore gains from the sale of property and assets are subject to income tax at the normal rate.

Russian authorities consider employment benefits part of an employee’s taxable income. Such benefits may include in-kind compensation such as company cars and gifts, reimbursements for housing, gains from exercising stock options, and employer contributions to foreign pension plans. Income received in kind is valued at fair market prices. These are taxed at the personal income tax rate.

Interest (coupon income) arising from savings and investments must be included in your income tax return. From January 2021, both residents and non-residents pay 13% income tax on the interest accrued on deposits exceeding 1 million p., multiplied by the Bank of Russia key rate. For example, in 2021, the amount of non-taxable interest will be 42,500 p.

Taxes on investments and dividends

Residents receiving dividend income from investments will need to pay interest at the 13% tax rate. Non-residents, however, pay 15% on dividends received from Russian legal entities.

Read our guide to buying property in Russia

Income from the sale of shares in Russian companies after five years of continuous ownership is exempt from tax. This exemption now also applies to foreign shares.

If you own property in Russia, any rental income attracts the same Russian income tax rates as other taxable income. Rental expenses such as mortgage interest, utility bills, and maintenance costs are not deductible for income tax purposes.

How to file your tax return in Russia

While it isn’t always necessary to file a tax return in Russia, it is advisable to do so as an expat for two reasons. Firstly, to declare any overseas income you may have. Secondly, all taxes may not have been withheld at the correct rate at the source of payment and paid to the Russian tax authorities, therefore filing a return offers a chance to correct any discrepancies.

It is, however, mandatory for self-employed professionals, registered businessmen, and recipients of other income (outside of a salary) to file a tax return.

You can file a Russian income tax return in different ways. The easiest method is online via the FTS website or using their mobile app, Налоги ФЛ. To register, you will need your universal tax number (INN in Russian, ИНН — индивидуальный номер налогоплательщика) – you can apply for it online (in Russian) but will need to visit a local FTS office to pick it up.

Alternatively, you can file your returns via a number of authorized specialized operators (in Russian). Additionally, there are also options to pay personally at the local Russian tax office in the city where you live, through a Russian bank account, or by visiting a post office.

You should keep copies of the payment documents and any other tax-related documents for up to four years. After submitting a tax declaration, you can contact the Russian tax authority to check if there are additional taxes, fees, or fines owed.

The tax year in Russia is the same as the calendar year. Russian income tax returns must be filed by 30 April of the following year. The deadline to pay any taxes is 15 July of the year following the reporting year.

An individual entrepreneur under the general tax regime must make three advance payments: on 25 July, 25 October, and 25 January of the tax year. The balance of the tax due is to be paid on 15 July.

Expats with a single source of income – their salary – usually have their Russian income tax withheld at source and paid by their employer. In the case of other income, such as that arising from savings, dividends, or rent, you will need to file your own income tax declaration. The form to do so is NDFL-3; you can find it on the FTS website (in Russian).

Residency status determines income tax rates in Russia. If you live in the country for more than 183 days per year and have a legal Russian residency permit, you are a tax resident. Therefore, you will need to pay income taxes in Russia on all your worldwide income at the rate of 13% for annual income less than 5 million p. or 15% for income above that amount.

However, non-residents only pay tax on income arising from local sources. The tax rate for non-residents is 30%. An exception is possible for the 2020 tax year due to the pandemic. Individuals who stayed in Russia for a period between 90 to 182 days during 2020 have a right to apply for tax resident status for the tax year.

Foreigners with a temporary or a permanent residence permit are eligible to register as an individual entrepreneur (индивидуальный предприниматель) or IP (ИП), which means that different tax rates apply. Such IPs pay between 4–6% on their turnover as income taxes in Russia. The former rate applies when providing services to private individuals, while the higher rate is for companies.

Russia does not have separate rules for married couples. If both husband and wife have taxable income within the Russian Federation, each must pay Russian income tax separately. In contrast to many European countries, there is no concept of joint tax returns in Russia.

Official residents can reduce their Russian income tax bills via deductions and allowances. These are typically not available to non-residents. Therefore, tax deductions in Russia only apply to earnings subject to the 13% or 15% tax rate for residents.

The main deduction from income taxes in Russia applies to children. The exemption starts from 1,400 p. for the first two children and goes up to 3,000 p. for a third and each subsequent child. It does not matter where the children live when applying for this tax deduction. However, to qualify for a deduction of child tax, you must be earning a cumulative annual income of less than 350,000 p.

Individuals may also deduct the costs of their own education in licensed institutions (within limits) and for their children’s education (up to 50,000 p. per child).

Donations to certain non-commercial organizations (from 2012) and charities are deductible from taxable income (within the limit of 25% of all income subject to 13% tax rate).

Self-employed entrepreneurs in Russia are generally required to pay income taxes on the profit from their businesses, typically the amount arrived at after deducting business expenses from revenue. Such deductions and allowances are laid out in the Russian corporate tax code.

Income tax in Russia for foreigners

Expats residents in Russia can claim a foreign tax credit against their Russian tax liabilities if they are covered by a relevant Double Taxation Treaty (DTT). Russia has signed DTTs with more than 80 countries. The credit may not exceed the amount of tax payable in Russia.

In order to claim the tax credit, individuals will need to provide supporting documentation along with the tax declaration within three years after the reporting period.

PWC offers a list of countries with which Russia has DTTs.

Due to Russia’s residency rules, income tax may sometimes be withheld at the wrong rate (e.g., 30% instead of 13% or 15%). In such cases, expats should contact the local tax office directly to ask about refunds. Since such dealings are likely to be in Russian, it is worth seeking the advice of a local tax lawyer.

A failure to file Russian income tax by the deadline may attract a considerable fine. Such penalties are 5% of the outstanding tax liability for each month of delay. The total amount late filing penalty is a maximum of 30% of the outstanding tax liability but cannot be less than 1,000 p. Payment delays also attract interest equal to 1/300 of the Central Bank’s refinancing rate per day of delay.

If the amount of unpaid tax is more than 900,000 p. over three years, you may be subject to a criminal investigation.

Although income taxes in Russia appear straightforward, there are a few exceptions and deductions available to resident and non-resident taxpayers alike. The tax system is fluid, and many legal requirements may not be applicable in practice thanks to additional exceptions. There is also wide scope for interpretation.

Further, taxes may not always be withheld according to an expat’s residence status. As such, it is advisable – particularly for expats who are self-employed – to seek expert advice before determining the likely tax consequences and finalizing their returns.

Americans living in Russia can get expert help in filling in their US tax returns from Taxes For Expats.

The following resources could prove helpful for those looking for more information about income taxes in Russia: