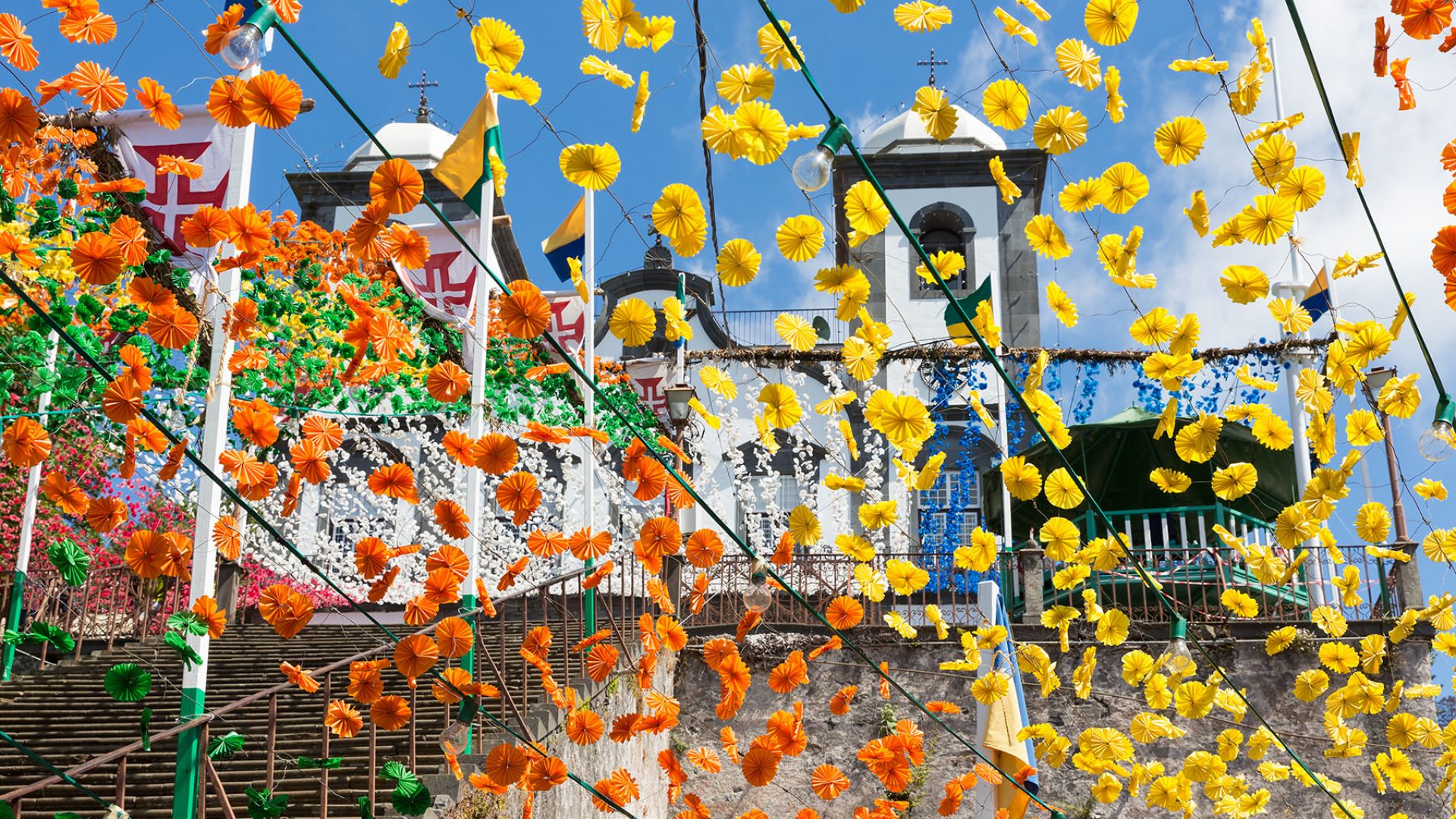 The best festivals in Portugal in 2023

Be enchanted by the diversity of Portugal’s biggest festivals for 2023, celebrating sardines, religion, sand sculpture, classical music, and more.

Most villages and towns in Portugal have their own traditional festival (festa) or pilgrimage (romaria). These traditional festivals celebrate Portuguese history, religion, and culture. There are also some great contemporary events throughout the year, including music festivals, sand sculptures, gay pride events, and more. Visiting the country during one of these top Portuguese festivals is an excellent way to experience Portugal’s rich culture.

You will find Carnaval parades all over Portugal, with Lisbon and the towns of the Algarve throwing particularly spectacular celebrations. While it may seem to be all Rio-style feathers, spandex, and sequins, Carnaval festivals in Portugal date back centuries to when people held huge feasts to eat up all the meat, which was forbidden during Lent. Traditionally, it begins on the last Friday before Lent and ends on Shrove Tuesday.

During Semana Santa, or Holy Week, there are processions all over Portugal. The most magnificent ones are in Braga, where locals decorate the entire city center with flowers and lights; São Brás de Alportel (the Festa das Tochas) in the Algarve comes in a close second when it comes to atmosphere. One of the largest processional festivals in Portugal is the Festa da Mãe Soberana in Loulé in the Algarve. Meanwhile, over in Tomar, those parts of the procession carry huge flower-covered crosses and destroy them at the end during a special ceremony.

FIESA, the International Sand Sculpture Festival held in Pera in the Algarve, has been running since 2003. Artists use some 40,000 tonnes of sand over an area of 15,000 square meters to create sand sculptures. These depict people, places, and things in incredible detail. Some sculptures even soar up to a height of 12 meters! By day, visitors can attend workshops, contests, and demonstrations. And at night, the festival organizers illuminate the magnificent sculptures.

Festa das Cruzes, the Festival of the Crosses, is the largest annual event in Barcelos, Minho. Its roots stem back to the 16th century when a cobbler saw the shape of a cross appear on the ground and interpreted it as a sign of divine presence. Up until the 19th century, the festival was purely religious, attracting pilgrims from all over Portugal. Today, it’s a decidedly more secular celebration, featuring parades of locals in folk costume, circus performances, horse races, and fireworks.

Peregrinação de Fátima is Portugal’s most famous Christian pilgrimage. On 13 May 1917, three children saw a miraculous vision of the Virgin Mary in Fatima, now Leiria-Fatima. Later that same year, more apparitions appeared elsewhere. This was apparently witnessed by large numbers of visitors to the site. Massive numbers of pilgrims come here throughout the year, but 13 May is the most important date. The town hosts a candlelight procession on 12 May, which leads down to the sanctuary. The next day, tearful crowds wave white handkerchiefs as a congregation carries a statue of the Virgin Mary from the high altar to the Chapel of the Apparitions during the Adeus (farewell) procession. A second pilgrimage also occurs in October.

During the Feast of Saint Anthony festival on 12 June, the Alfama district of Lisbon is decked with lights and streamers. The air is filled with the smell of sardines grilling on churrascos outside houses and restaurants. The tradition celebrates the story of how a fish rose out of the sea to listen to the 13th-century saint when the locals wouldn’t. Saint Anthony is also known as the matchmaker saint. Women fill their mouths with water until they hear a man’s name mentioned, while men offer women basil plants and love poems.

The Arraial Pride is Portugal’s main gay pride event and has been held since 1996. You can expect the usual fun and frivolity of music, food, drink, and a marketplace late into the night. Although it is usually held at the end of June, the exact date and location of the LGBT event change every year.

This is one of the largest music festivals in Portugal and is based on its famous Brazilian counterpart, Rock in Rio. Held in Lisbon’s Bela Vista Park, the four-day, two-weekend music festival attracts leading international musicians and DJs, as well as emerging talent to perform on the World Stage, Electronic Tent, and Hot Stage. The 2020 Rock in Rio-Lisboa takes place on 20-21 and 27-28 June.

This festival, which pays tribute to Saint John the Baptist, has been held in Porto on 23 June for more than 600 years. It begins with street parties and music begin in the afternoon, and the party continues late into the night. Party-goers release sky lanterns and balloons and enjoy a midnight firework display. They continue celebrating until dawn. As part of the celebrations, people bash each other over the head with plastic hammers. Young men also throw garlic flowers at women who take their fancy.

During the first two weeks of July, girls parade around the streets of Tomar with piles of bread on their heads as part of the ancient Festa dos Tabuleiros (Festival of the Trays). Also known as Festa do Divino Espirito Santo (Feast of the Holy Spirit), the event is Tomar’s biggest and most spectacular procession. However, it only takes place every four years. People walk in pairs with the girls wearing tabuleiros; these are headdresses made from bread stacked in rows, festooned with flowers and topped with a crown and dove or celestial sphere. There are other traditional processions alongside the main parade.

Festa do Colete Encarnado (or Festival of the Red Waistcoat) is Portugal’s answer to Pamplona’s running of the bulls and takes its name from the traditional red waistcoats worn by local campinos. Every year, the three-day festival starts with a parade celebrating the campino (cowboy) in the city square and into the streets. Then the bulls run loose through the streets of Vila Franca de Xira while foolhardy men try to keep out of their way. Failure is common; in fact, there have been casualties during the festival in the past.

Close to the Spanish border, the hilltop town of Viseu has one of the best-preserved fortifications in Europe. Viseu is also home to the longest festival procession in southern Portugal. The Feira de São Mateus is a series of celebrations in commemoration of Saint Matthew.

Golegã is the horse capital of Portugal. This association has a lengthy history, dating back to when Portugal’s second king, Sancho I, owned a stud farm there during the 12th century. Traditionally, people came on Saint Martin’s Day (11 November). Today, thousands of visitors come to the two-week Feira Nacional do Cavalo (National Horse Fair) to celebrate the Portuguese Lusitano breed at what is easily one of the most prominent horse-related festivals in the country. There are competitions, food, and abundant amounts of wine.

Saint Martin’s Day is celebrated on 11 November. Saint Martin was a Roman soldier who cut his cloak in half to give it to a beggar to keep warm; after which the sun came out to warm him. As a result, warm winter days at the beginning of November are called Saint Martin’s Summer. This is when the chestnuts start ripening and the first wine of the season is ready to drink. The Portuguese celebrate this time – called Magusto – with bonfires and parties, plenty of chestnuts and chestnut dishes, as well as água-pé; a weak wine made from watered-down dregs. The most traditional Saint Martin’s Day festivals in Portugal are in northern Trás-os-Montes, Beira Baixa (especially Alcains), Golegã, and Penafiel. 10 most beautiful places to visit in Portugal Trash and recycling in Portugal