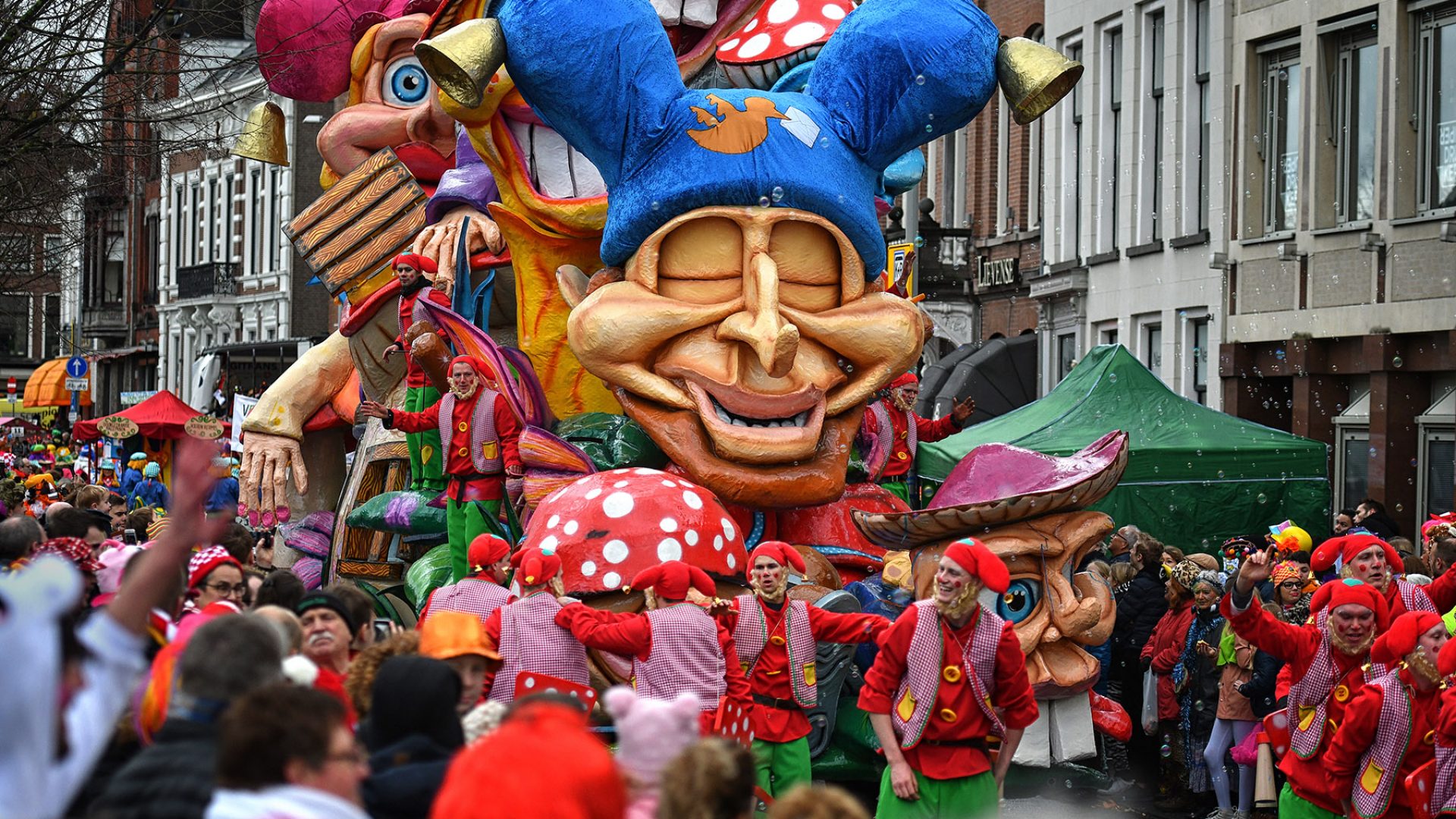 Carnival is celebrated in the Netherlands with color, frivolity, and reckless abandon. Join the Dutch as they let loose at the best carnival events across the country.

When you start hearing traditional slapstick tunes in bars and seeing pop-up stores selling feestkleding (festival costumes) in the south of the Netherlands, you know Dutch carnival is near; the locals are itching to erupt into the huge street parties of raucous frivolity that signifies carnival in the Netherlands.

Mainly celebrated in the predominantly Catholic southern provinces of Noord-Brabant and Limburg, carnival was a religious festival. It sets in the three days before Ash Wednesday and the fasting season of Lent. Thus carnival in the Netherlands became dedicated to reversing rituals, particularly of social roles, and abandonment of desired norms.

Nowadays, the religious meaning of carnival in the Netherlands has disappeared; however, the date and practice of overturning daily behavior remain. The Dutch – and thousands of visitors who flock to the south – temporarily forget their strong belief in ‘being normal’; they don wacky costumes while singing and prancing around the city with drinks in hand. No matter your age, carnival in the Netherlands is a playground for children, young revelers, and the elderly alike.

Dutch carnival preparations begin in advance, traditionally on day 11 of month 11 at 11:11; 11 is the fool’s number in the Netherlands. This year the festivals officially start on Saturday 10 February until Tuesday 13 February. Some towns celebrate as early as 8 February and continue the party until the first day of Lent.

During carnival in the Netherlands, each town changes its name for the occasion. Even Amsterdam joined the fun in 2016 by temporarily calling itself Gròòtgragtegat, roughly ‘big place with canals’; that’s thanks to a group of Amsterdam-based residents hailing from North-Brabant.

Other ubiquitous Dutch carnaval icons include a Carnival Prince (Prins Carnaval), the master of ceremonies, a Raad van Elf, a group of 11 locals (typically men) who monitor the festivities, and a grand optocht (parade) that typically makes fun of politicians, celebrities and the year’s past events. Further mocking can be heard by the ‘barrel speaker’ (onpraoter, sauwelaar, tonpraoter, buuttereedner, ouwoer) in dialect. Just look for the local who is standing on or in a beer barrel, surrounded by laughing Dutch carnival-goers.

Only during Dutch carnival will you hear the typical greeting, “Alaaf.” This is often accompanied by a reversed salute with the top of the right hand to the left temple.

If you want to join the raucous fun, here are some of the biggest Dutch carnival events in the Netherlands.

Carnaval Maastrich is the largest celebration of all the southern cities. On Saturday 10 February, the city ‘fetches’ the Prince of Carnival from the central station at 13:11. Then, he leads a parade of floats, marching bands, and carousers to the town hall for a reception. The optocht (parade) officially begins at 14:11 in front of the Minckelers statue and goes around the city. Maastricht carnival, however, doesn’t officially open until Sunday at 12:11 when the Prince’s flag raises and 11 shots go off. Afterwards, a grand parade leaves the station at 13:33 and passing through the city center. Carnaval Maastricht continues with family events and a children’s parade on Monday (leaving Wyck at 14:11). It culminates with the Zate Hermeniekesconcours (brass bands competition) that belts loose at Vrijthof Square at 14:11.

Maastricht carnival is mostly outdoors, like in the rest of Limburg, and festivities center around Vrijthof (see events in English). There are daily events during the Maastricht carnival period, including a Cramignon dance on the Markt at 20:33 every evening. Here, everyone accompanies the brass band and revel in the true spirit of Carnaval Maastricht.

The grand parade of Venlo Carnival takes place on Saturday 10 February in the city centre and begins at 12:11pm. There are more than a dozen parades from 10 to 13 February in 2018 in the municipality alone, making it an ideal area to experience carnaval in Limburg. Click here for the parade schedule and here for other events around Jocus Riék during Carnival.

There is plenty to find during Eindhoven carnaval, otherwise known as Lampegat or ‘light hole’. Eindhoven carnival begins with Froaje Vrijdag on 9 February with various performances and a party in a huge tent located on the Market Square. The city’s optocht begins the next day at 11:11am in the centre; you can check the parade route.

Popular carnival spots in Eindhoven include: the Stationsplein, Market Square, Hotel Pullman Cocagne, Wilheminaplein and the famed Stratumseind. For a complete list of events Eindhoven carnaval, see the city’s agenda and website.

The Opstoet, the annual parade of Tilburg’s carnaval, starts on 11 February at 12:30. Before the grand parade, there are numerous events in the name of Tilburg carnaval, where revelers can attend a concert on Wednesday and Thursday. There’s also a massive pub crawl on Friday, among other celebrations.

The grand procession of Breda carnaval begins on 12 February at 12:51 at the Nieuwe Haagdijk. It follows a route that ends at Boschstraat.

The optocht is preceded by a concert at the Chassé Theatre on Friday and a street carnival on Saturday in the Grote Markt, which features local and international acts. For the full agenda of the events for Breda carnaval, click here.

Den Bosch carnaval goes into full swing in on 11 February in 2018 with the city’s grand parade, which is cheekily named the Arrival of the Prince Amadeiro in ‘s-Hertogenbosch.

On the day of Den Bosch carnaval, HRH Prince Amadeiro Ricosto di Carnavallo, Lord and Master of Oeteldonk, and his helpers arrive at Oeteldonk Centraal (or Den Bosch station) at 11:11. After several ceremonies, they march in a procession towards the Market Square where they symbolically honor a farmer named Knillis, the alleged founder of Oeteldonk, with a doll decked in traditional farmer costume. Following that other parties and events occur all over the historic fortified city; many events also occur in the days before Den Bosch carnaval.

Although not in Noord-Brabant and Limburg, the people of Nijmegen – or Knotsenburg, as it’s temporarily known – celebrate Dutch carnival with as much passion as their southern peers. Nijmegen carnaval officially kicks off on 10 February with a procession starting at 11:11 that leads to the Market Place, when the people hand over the city’s keys to the Carnival Prince and tap the first beer keg to celebrate at 13:00.

In the following days of Nijmegen carnaval, until 13 February, you can attend various events and visit the city’s wide array of cafés.

Dutch carnival in other provinces

Since Dutch carnival is traditionally celebrated in the south, most of the throngs of people from the rest of the Netherlands descend upon Noord-Brabant and Limburg. However, some Dutch cities also stage smaller parades during that time. Click here for their schedule.

Wherever you are during carnival in the Netherlands, make sure to wear your carnavalspakje, and bring high spirits to the party! 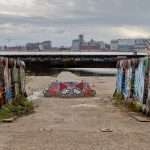