Top 10 foods in Luxembourg – with recipes

Many of Luxembourg’s top traditional foods reflect the Grand Duchy’s farming heritage as well as its geography sandwiched between Germany, France, and Belgium.

You will find a great variety of influences in Luxembourg’s traditional cuisine. Luxembourgish food combines rustic German heartiness, French finesse and a little Iberian flavor for good measure. When you think of food in Luxembourg, large portions, lots of meat, fish, potatoes, beans, and dashes of cream and wine should come to mind.

It’s certainly not a cuisine for those on a diet, but it’s definitely tasty. Here are 10 easy Luxembourgish recipes you can make at home.

This is a thick soup with green beans, potatoes, and bacon. You’ll often find it served with potato pancakes. Sometimes, carrots, leeks, celery, onions, milk and cream also appear in the mix. Other popular soups include beef broth and a creamy potato and leek soup called Gromperenzopp.

Luxembourg has no access to the sea. As a result, traditional fish dishes are based on what swims in fresh water rather than in the sea. Trout, pike, and crayfish are some of the most common fish you’ll find in Luxembourg’s restaurants. F’rell Am Rèisleck is one of the most popular dishes, where the fried trout bathes in a rich Riesling wine and cream sauce. Originally from Belgium, mussels have also become one of Luxembourg’s signature dishes.

Originating from the wine-growing Moselle region of Luxembourg, Friture de la Moselle is a fried fish dish traditionally eaten with fingers. Different kinds of small freshwater fish are cleaned and gutted (or left whole if the fish are tiny), seasoned with salt and pepper, then dipped first into lemon juice and then into a flour and egg batter before deep frying. The fish is served with wedges of lemon to squeeze over the fish before you eat.

These delicious crispy fried potato cakes or fritters are one of the most popular snacks in Luxembourg ­— you’ll find them on sale at markets and fairs everywhere. Gromperekichelcher uses a mixture of grated potatoes, chopped onions, parsley, egg, flour and salt, then shaped into flattened patties and fried. Eat them hot as they are or with ketchup or apple sauce. Some Luxembourgers eat them with soup.

During the game season — October to December — you might find huesenziwwi on the menus of some Luxembourg restaurants. The dish is a jugged hare stew, where hare is marinated between 48 and 72 hours before being fried in lard and flambéed with cognac. The hare is served with a sauce made from hare or calf’s blood, red wine, and more cognac.

Some say this is the national dish of Luxembourg. It’s a hefty, heart-warming dish of smoked and salted pork (judd) with broad beans (gaardebounen). Smoked neck (sometimes called collar) of pork is first soaked overnight in water. On the next day, place it in a pot with vegetables and spices such as bay leaves and cloves. It cooks over a low heat for several hours until tender. When it’s ready, cut the pork into thick slices and place it on a bed of creamy sauce of broad beans and potatoes. Usually, you’ll boil the potatoes or perhaps fry them with bacon. If you order this dish in a restaurant in Luxembourg, go with a big appetite as portions are usually huge.

Kuddelfleck and other offal dishes

In the past, no part of an animal went to waste. This is why you’ll find many different offal dishes on the menu in Luxembourg. Traditional dishes include: liewe kniddelen mat sauerkraut (liver meatballs and sauerkraut); traipen (black pudding made from pork head, lungs, kidney and tongue mixed with cabbage and bread), which are fried and served with apple sauce; and kuddelfleck, which is tripe, coated in breadcrumbs and fried, then served with either a white wine or a spicy tomato sauce.

Paschtéit or Bouchée à la Reine are puffy, large pastry cases filled with chicken and mushroom, and mixed together with a creamy or béchamel sauce. The case and contents are actually cooked separately; once the pastry is baked, the filling is put inside and finally a little pastry lid is popped on top.

Pâté is a common paste made from meat, spread on bread and often eaten with pickle. Rieslingspaschteit or Pâté au Riesling is a typical Luxembourgish dish where a coarse pork pâté or terrine, surrounded by a Riesling-flavoured aspic, is baked in pastry to make a meat pie. The pie is served sliced.

You’ll find quetschentaart, which is an open plum tart, in bakeries all over Luxembourg in the autumn after the fruit has ripened and been harvested. The tart is traditionally made with a type of plum called a damson. The damsons are stoned, halved and then put into a sweet pastry dough base before being baked in the oven. The tart is served with a sprinkling of sugar. Another Luxembourgish speciality made of plums is the incredibly alcoholic eau de vie, a 40–50% proof plum brandy. 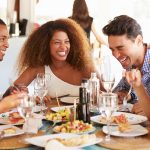