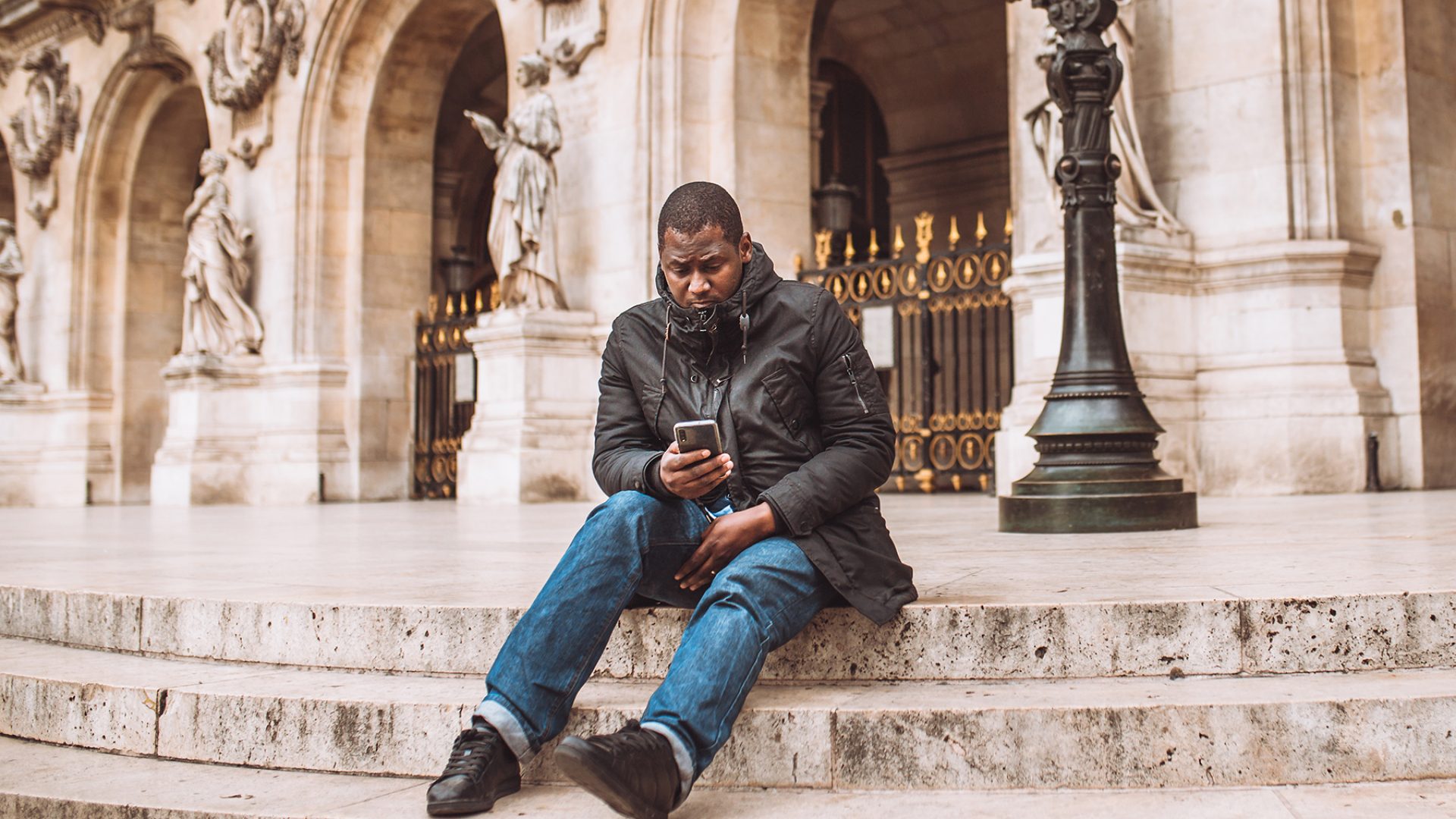 There has been a shift towards mobile banking in France in recent years, with many residents using online payment apps to pay bills, transfer money, and even pay for their groceries.

The growth of digital banking has been one of the most significant financial trends in Europe in recent years. France, one of Europe’s largest economies, has seen a big shift towards online banking; most French banks now advertise digital services. bunq, a mobile-only bank that offers services to expats in Europe, explains how it all works.

This guide includes sections on:

With bunq, you can open your full bank accounts in just five minutes using nothing more than your mobile phone. You get real-time access to your account, instant payments and dedicated customer support available in English, Dutch, German, Italian and Spanish. Banking providers in France are now a mixture of high street banks, international institutions, and internet banks. Many of the big-name banks now offer digital services, as well as traditional services offered at branches. This reflects the increase in online and mobile banking in France. According to Eurostat figures, 66% of the French population currently use internet banking, above the EU average of 55%. Mobile banking is also on the rise, with 40% of internet users in France using mobile banking services in 2018.

Mobile banking providers in France include:

Read more about banking in France in this useful guide

Features of mobile banking in France

Mobile banking capability relies on banking apps being downloaded onto smartphones or tablets. These enable users to perform functions and access services from their devices. Each French bank has its own app, and customers can use these banking apps for things such as:

Advantages of mobile banking for expats in France include the ability to move money around between accounts and across borders with less hassle, speed of service (money can be transferred immediately), lower costs, and availability of services in English. bunq allows you to make international payments in other currencies up to eight times cheaper as well as saving you 3% on card transactions overseas.

There are, however, limitations to smartphone banking compared to desktop and traditional banking. Loan services are limited and you can’t currently move money between foreign currency accounts. Another issue is reliance on a Wi-Fi connection. This could be an issue if you live in a rural area, although there is generally good internet coverage in France.

Like mobile banking, mobile payments in France are also becoming more widespread. This form of financial transaction is an alternative to using cash or credit/debit cards. Around 15.6% of French smartphone users made in-store mobile payments in 2019.

Innovative functions include contactless payment systems where mobile devices can be waved over a payment terminal, digital wallets that link to bank accounts and can store and send money to third parties, and QR codes that can be scanned to pay for goods such as concert tickets.

Mobile payment apps installed on smartphones and tablets are usually linked to bank accounts. Two of the most popular apps are Apple Pay and Google Pay, released in France in 2016. Several big stores have also released their own apps, such as French multinational retailer Carrefour which launched its Carrefour Pay app last year. There are also many new companies on the market providing different mobile payment services in France. Examples include Lydia, Lyf Pay, Buyster, and S-money.

How to open a mobile bank account in France

Opening up a mobile bank account in France is a straightforward process. You can do this with some banks before you move, which is handy for expats who might want to make arrangements ahead of traveling.

There are no legal restrictions on residents or non-residents opening up an account with a French bank. However, some banks only offer their mobile banking services to residents. To open a mobile account, you typically need to provide contact details such as a mobile number and e-mail address, proof of ID, and residential address. Documentation can be scanned and submitted digitally.

Some traditional French high street banks require you to open a traditional account before accessing their mobile banking services, which may mean providing additional documentation. The advantage of using online-only banks such as bunq, N26, and Revolut is that you can open an account from anywhere in the world in a matter of minutes.

One of the big advantages of mobile banking is reduced fees. Mobile accounts don’t incur so many charges as there are fewer overheads involved in administrating accounts.

Charges for these services are cheaper on average with mobile bank accounts. However, you will need to check with individual providers and shop around as French bank account costs can vary considerably.

Some accounts with mobile-only banks are available for free, however more advanced plans come with a monthly fee attached. Many mobile banks offer global ATM withdrawals, P2P payments, and international money transfers either free or low cost. Some limit the number of free transactions per month, however.

Most of the main mobile payment apps used in France don’t charge fees for general payment services. There may be costs for services such as instant transfers to some accounts, payments to foreign currency accounts, or payments above a certain limit.

There have been fears over just how safe and secure mobile banking is. In France, despite the growth of mobile banking, studies show that levels of trust remain lower than with traditional banking, with issues including data protection, transaction safety, and encryption.

However, banking providers are working constantly to tackle challenges and minimize threats. Safety features on mobile banking and payment systems include the use of fingerprint ID with many systems, high levels of encryption and a disconnect function after periods of inactivity.

You can protect yourself against fraud and security breaches by taking measures such as:

How safe are mobile and digital banking? Read more here

Mobile banks in France have their distinct advantages over traditional banks although they are not without their limitations. Here are a few areas where comparisons can be made.

Mobile banking features are continuing to improve as the technology becomes more sophisticated, with digital financial planning, budgeting, and investment monitoring tools among the more fancy functions now available with many accounts. However, certain services such as loans, mortgages, and insurance are still limited with mobile banks.

Mobile banks in France typically have lower fees for basic services such as payment charges, money transfers, and foreign ATM use. It’s easier to find free basic accounts with mobile banks than with traditional banks. Additionally, mobile banks tend to offer lower interest rates. However, charges for less common services such as loans and overdrafts are sometimes higher.

Despite public concerns, mobile banking is actually the safest form of banking thanks to added security features such as fingerprint ID account access. Additionally, smartphone operating systems are less vulnerable to viruses and malware than PCs and the high encryption means that accounts are highly resistant to hacking.

Perhaps the key advantage of mobile banking is the convenience aspect. With mobile bank accounts in France, you have 24/7 access to your account and can perform daily transactions such as transferring money and making payments at the click of a smartphone button. It’s also a lot easier and quicker to set up an account with a mobile bank. You can do this on your phone in minutes rather than having to visit a branch or make an appointment.

Banks have traditionally had problematic relationships with ethics and sustainability. Some of the big names have financed and invested in industries such as arms and fossil fuels. Mobile banks are typically more environmentally friendly as they don’t use up the same amount of resources. As many of them are smaller startup firms, they are also less likely to have funds tied up in unethical projects overseas.

However, with many traditional banks now moving towards more transparent ethical corporate strategies and making more green investments, it’s important to do your research on individual French banks to see what their record is if this is an important concern for you.

Research carried out so far in France indicates that mobile banks such as N26 and Revolut outperform traditional banks such as BNP Paribas and Society Generale in terms of ethical banking.

For those that value face-to-face interactions and being able to build relationships with banking staff, traditional banking remains the best option. Mobile banking does to an extent trade-off convenience with personal service. However, with a strong social media presence and advisers available for online chats, these new banks are changing the ways in which consumers interact with financial services. A guide to French banks